The Beginning of Gardening Season

A Seedy Weekend to Discover Gardening

Back away from the kale and goji berries and make room for the skirret—or chervis en français—a vegetable with many nutrients that has too often been overlooked.

The shrub, whose roots and leaves are edible, is one of those “old, forgotten plants, with plenty of nutrients.”

“It tastes quite sweet, a mix of carrot, coconut and parsnip,” said agriculturalist Patrice Fortier.

The skirret was also some of the unique fare on offer at the 16th annual edition of the Seedy Weekend, which was in full swing from Feb. 12 to Feb. 14 at the Montreal Botanical Garden. Run by the NDG Food Depot, the weekend event is considered by some to be the unofficial start of the gardening season.

“The Seedy Weekend is growing every year, and we find it amazing to see the mix from the public, from students to older persons coming here, and beginner gardeners to seasoned ones,” said Lauren Pochereva, Urban Agriculture Manager at the NDG Food Depot.

According to Pochereva, there were more than 3,000 attendees in 2014, a number that rose to 3,700 the following year. There are high hopes that this event will continue to expand and grow for the 2016 edition.

The public is encouraged to exchange ideas with the professionals and buy product, be it vegetable seeds or other gardening implements.

The urban agriculture movement has always been linked to Montreal, Pochereva said.

“There is a long tradition in Montreal, dating back to the Second World War, of gardens in cities. Thanks to this movement, the city was one of the first in North America to create its community garden network in the 1970s,” Pochereva said.

Urban agriculture not only protects the biodiversity of green spaces in the city, but also helps create a unique urban ecosystem with varieties of trees, herbs and shrubs. It’s even excellent for keeping the fridge well stocked.

The NDG Food Depot manages six community gardens at the moment, and they also are in the process of starting a production garden, which will focus on the growth of fruits and vegetables, this year.

Many people approach gardening from different backgrounds, but all seem to be united with the same goal of producing new plants and preserving old ones.

“I came to agriculture via my artistic production, and I started my seeds company in 2001,” Fortier said. “The first time I got interested in gardening, I was in New York, working as a cabaret dancer. For a young urban like me, it seemed crazy to try becoming a farmer at the time, and live by the seasons.” 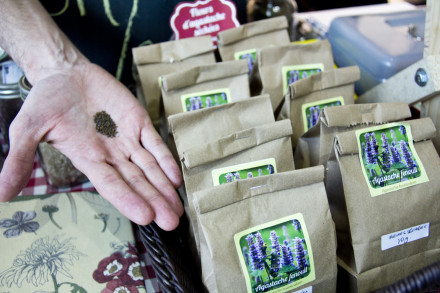 While Fortier was in New York, there was an explosion of local gardens on balconies, decks and vacant lots. It was his first encounter with gardens that gave him pause for thought. Now, he is devoted to his endeavours. According to Fortier, his company, La société des plantes, presents 260 varying products, although some are not his own production.

“My job as an agriculturalist is to save old seeds, but also to create new products that are resilient in our weathers and give good results,” Fortier said.

Despite the -40 C windchill this past weekend, the agriculturalists were unbothered—they work year-round.

“I work with plants all year-long, and winter is no exception,” Fortier said. “This is when I prepare my seeds and present my products.”