The Line Has Been Drawn

FC Montreal couldn’t avoid the rain and gloom that fell on Stade Saputo as the bleu-blanc-noir lost 2-0 to Louisville City SC this past Wednesday night. It’s the team’s eighth loss in ten games.

Goals in the first half by Louisville’s Tarek Morad and Matthew Fondy ensured that FC Montreal would continue to stay at the bottom of the United Soccer League standings, the lower-division league affiliated with Major League Soccer.

“We’re lacking rage, we’re lacking technique, we’re lacking finishing in front of goal and we always make the same fucking mistakes,” said head coach Philippe Eullaffroy after the game. “At one point the players will need to learn a little faster or they’ll never learn and they’ll stay home.” 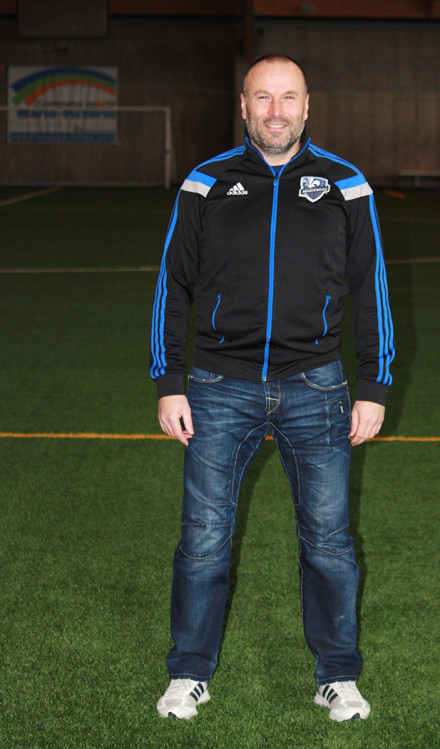 Mistakes played a significant role in Montreal’s loss. After allowing a goal off a corner kick from Louisville’s Tarek Morad, FC Montreal centre back Mele Temguia made one of the worst mistakes of his young career by accidentally passing the ball to Matthew Fondy inside the penalty area. Louisville’s top goal-scorer easily put the ball past goalkeeper Maxime Crepeau who didn’t anticipate the mishap.

“The second goal, I’m sorry, but this is stuff that we don’t even see in the under-13s anymore,” said Eullaffroy on Temguia’s mistake.

FC Montreal sits last in the league with only one win and one tie in ten games. With a little over a third of the season gone, the mood is beginning to shift on the coaching staff.

Since the beginning of the season, the mantra on the sidelines has been to promote development and to place emphasis on progression rather than immediate success. After every match, FC Montreal would find something positive even in a loss. Coming off the rain-soaked pitch, some of the players continued to follow that mentality.

“It’s disappointing for what we expected, but there are still positives to take out from this game,” said forward Victor N’Diaye about the game.

While the players are trying to keep positive, it is clear that Eullaffroy’s patience is wearing thin.

“We need to tell them upfront,” he said. “They weren’t good despite their efforts and it’s lacking rage, it’s lacking will to win and to put their balls on the pitch to say: we’re going to destroy this team.”

For the first time this season, Eullaffroy hinted that he could take action on the players who are underperforming on the pitch and in training if they do not change certain aspects of their play.

As FC Montreal is the minor league affiliate of the Montreal Impact of MLS, the goal for the young players is to show their worth in order to eventually find a spot with the Impact. This leaves two choices for FC Montreal’s players: play well enough to earn a professional MLS contract or be released and try your luck elsewhere.

“We have arrived at a point where we made a review of the squad on the ten games, we’ve seen everyone and everyone got playing time,” said Eullaffroy. “Now it will be on us to make choices to continue with the ones that we think could go forward and turn the page on the other ones.

Below FC Montreal, there are Under-18 and Under-16 players who are looking to play for FC Montreal next season who could always take up spots from those who aren’t deserving.

Current players will consider Eullaffroy’s statements as a strong warning. At this point for the club, the players must raise their game or changes could come sooner rather than later.

The next FC Montreal home game will be on June 25 as they will take on the Wilmington Hammerheads at Stade Saputo.

In the original version of this article, Stade Saputo was referred to as Saputo Stadium. The Link regrets the error.