FC Montreal fans were treated to a high scoring affair this past Sunday afternoon as the bleu-blanc-noir defeated the Pittsburgh Riverhounds 4-2 at Stade Saputo’s turf field. Four goals were scored (a team record) by Montreal, including two from forward Anthony Jackson-Hamel.

On the losing side, Boris Živanović and Rob Vincent recorded both goals for the Riverhounds.

FC Montreal had a quick start to the game as it only took them seven minutes to score the first goal. Montreal forward Romario Williams intercepted a bad pass from a Pittsburgh defender in a dangerous position.

Williams then made a through ball pass to Jackson-Hamel who beat the goalkeeper and opened the scoring.

But the Riverhounds were not ready to give up so soon. 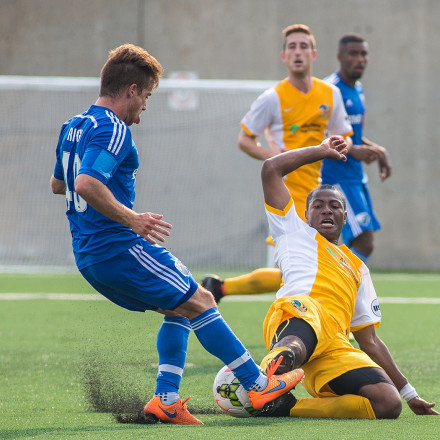 FC Montreal fans were treated to a high scoring affair this past Sunday afternoon as the bleu-blanc-noir defeated the Pittsburgh Riverhounds 4-2 at Stade Saputo’s turf field. Photo Matt Garies.

Forward Vini Dantas made his way to the right side of the box and made a low cross to Živanović, who slid and knocked the ball in to bring his team back in the game.

At half-time, the scoreboard read 1-1. In the locker rooms, head coach Philippe Eullaffroy gave a passionate message to his team, which stuck with Riggi.

“Coach told us to do everything we were doing defensively but he said that we were a bit timid offensively,” said Riggi. “He said to go out there and give your heart out like we do in training because we shouldn’t come here and be scared, so we just came out like lions.”

And lions they were. As soon as the whistle blew the second half, FC Montreal pursued their second goal.

Two minutes into the second half, Dominguez unleashed a shot from distance that fooled everyone on the field as it hit the crossbar and deflected into the net, giving Montreal a 2-1 lead.

“It was a good feeling. Scoring goals doesn’t happen very often for me,” said Marco Dominguez, the defensive midfielder who scored his first professional goal.

“[Donadel] plays the same position I do and I told myself I had to take a strike,” Dominguez said. “We don’t have a lot of chances to score but when you do have a chance, you shoot from further back and that’s what I did today.”

FC Montreal made a mistake in the penalty area that gave Pittsburgh a chance to equalize by way of a penalty.

Pittsburgh midfielder Rob Vincent scored to tie the game for a second time. However, FC Montreal didn’t implode, choosing to roll up their sleeves and dig deep for a third goal. 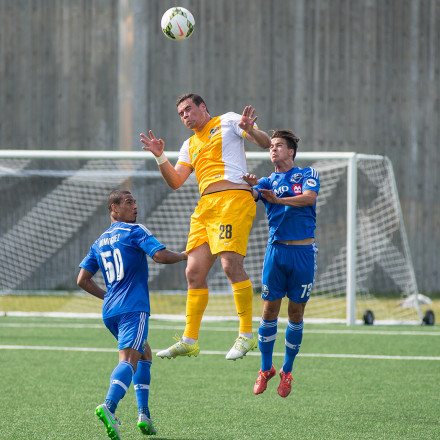 FC Montreal fans were treated to a high scoring affair this past Sunday afternoon as the bleu-blanc-noir defeated the Pittsburgh Riverhounds 4-2 at Stade Saputo’s turf field. Photo Matt Garies.

In the 77th minute, Riggi took advantage of a mistake made by the Pittsburgh Riverhounds in their own penalty area to score his fourth goal of the season and give FC Montreal a 3-2 lead.

“An attacker’s role is to sense these opportunities and something just drove me inside to continue my run and stay in the box,” said Riggi.

“The ball came to my feet and my job is to put it in the net. From there we had a lot of momentum going as well to get another goal and we got the job done.”

A late goal from Jackson-Hamel sealed a 4-2 win for Montreal, giving the team a positive result. FC Montreal manager Eullaffroy has been pleased with his side’s play as of late; he feels his team has shown more confidence in their abilities.

“Our progression made it so that when we get scored on, you know there will be opportunities to come back. And it showed today,” said Eullaffroy.

“This is going to be a new FC Montreal in the second half of the season. We just started it the right way and we’re extremely excited to continue.”

FC Montreal will have a short three-day break before hosting St. Louis FC on July 15 at Stade Saputo’s turf field where they will attempt to begin their first ever winning streak.