185 Trees Planted on the Loyola Campus

Despite the rain, several people showed up to plant trees on the Loyola campus yesterday afternoon.

Nov. 5 was the inaugural tree planting day, but the event will continue until Friday.

The 185 trees were provided by Soverdi, an organisation whose goal is to add more urban green spaces to Montreal. They also helped in arranging the event.

Rebecca Tittler, Coordinator of the Loyola College for Diversity and Sustainability, hopes the tree planting will create a sense of community amongst Concordia students, and their actions will improve the Loyola campus’ environment as a whole.

“The idea is to plant as many native trees on campus as possible,” she said.

Planting trees native to our environment promotes biodiversity and helps connect participants to their roots.

The new trees will provide habitat for native plants and animals, cooler temperatures in the summer, “and as healthy an environment as possible for the Concordia community,” she said.

“We were encouraged to put together a dream plan for the campus,” Tittler said, and decided that behind the Stinger Dome was the best option, even though it renders the trees nearly invisible to most students at Loyola. The reason being because the space was not going to be used in the near future.

“Planting 185 trees on the Loyola campus is not going to solve climate change but planting trees in general is a step in the right direction.” —Rebecca Tittler

The original plan was to plant 250 trees, but after some revisions it was reduced to 185. According to Tittler, the snow removal around the Stingers Dome cut down on the available space.

“Our goal is to mimic natural forest conditions wherever possible, to the extent that it is possible, so we will be planting at quite high densities in many places,” she said. “This will allow us to maximize the benefits of our trees.”

Emmy Fecteau and Daniela Gendron, both players on the Stingers women’s hockey team, represented their team at the tree planting.

They wore their Stingers jerseys and tuques, and exchanged light-hearted “estis” as they shovelled away. 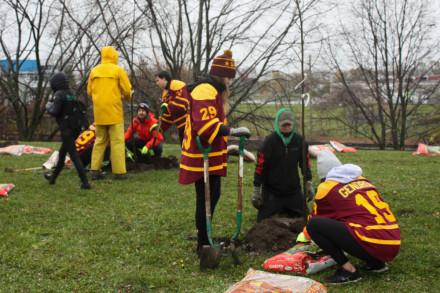 Their coaches encouraged them to go, considering the trees were being planted behind their rink.

The two hockey players joked as they worked, and Gendron laughing as she helped wipe some dirt off of Fecteau’s nose.

After the committee had a first draft, they “met with Concordia’s facilities management and presented [their] basic idea,” Tittler explained.

Simultaneously, Ikeda organized a student group called the Concordia Greening Project, “the mission of which is to increase vegetation inside and outside on both campuses.”

The student group was very involved in the organizing of the tree planting, and they were the ones who reached out to Soverdi.

“Planting trees also provides a sense of well-being, a sense of hope,” she said.

“In this time of environmental crisis, it’s easy to feel powerless. Planting 185 trees on the Loyola campus is not going to solve climate change but planting trees in general is a step in the right direction.”