Over 200 Artists Gather at Windsor Station for the Weekend Event

Sleeves, pants or shirts rolled up—tattoos enthusiasts were canvases for artists to ink in their next work of art.

“I started getting tattooed when I was 38, and I think it was, for me, a rebellion of finally deciding that it was my body and I didn’t need permission,” said Harriet Cohen, who attended the convention with her husband, tattoo historian Chuck Eldridge, multiple times over the years.

“My whole life I needed permission from different people, like my parents,” she said. “And then once I got one, I really liked it. It’s not addictive, but it’s more that if you like the art, you want to have more art.”

Back for its seventeenth edition, Art Tattoo Montreal gathered over 200 artists from all around the world in Windsor Station to share the love of tattoo art within Montreal’s hub.

Attendees flipped through the artists’ portfolios, displayed on tables, presenting intricate designs to choose from.

Valérie Emond, who organized the event with husband Pierre Chapelan said, “Montreal is a big tattoo city. People like to get tattooed and I think the friendliness of the artists brings a good vibe to the convention.” 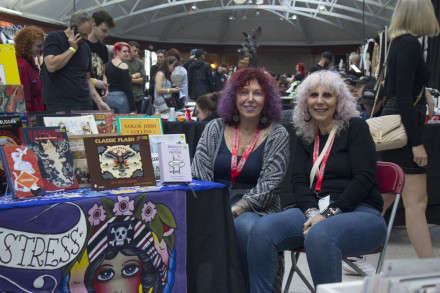 Harriet Cohen (on the right) attended multiple conventions, and her sister Shirley Cohen (on the left) accompanied her this time. Photo Nanor Froundjian

While some artists are returning for another year and others are participating for the first time, the yearly selection is done on an invitational basis. With years of experience in the industry and as owners of Studio Tattoo Mania in Montreal, the couple is well established in the tattoo scene.

Emond also touched on the influence of online platforms as additional sources to find new talents. “Obviously with social media now, there are some Insta-famous artists who do good work and we try to scout them out and we keep local artists as well. So it’s a big mix of foreigners and local artists.”

Victor Valcav, co-owner of Montreal tattoo shop Le Mausolée, attended the convention for the third time this year. Valcav has been tattooing for six years now.

During his one-year apprenticeship at a tattoo shop before officially beginning his career as an artist, he said, “I realized how big of an industry and how complex of a work it was, and I decided that’s what I wanted to do.”

Although he was studying to become an arts teacher, he changed lanes to follow his passion. “I just dropped everything and focused on that,” he said.

“I just like adorning my body with art and memories or images and memes that represent my life or my interests.” — Hayley Schofield

Even though Valcav draws most of his inspiration from vintage, traditional American tattoo books, he also dives into other reference books about medieval armours and birds, for example, for the composition of his designs.

Célyne Bégin, from Golden Wave Tattoo Co. based in Ottawa, focuses more on ornamental tattoo designs. Her work, ranging from smaller to larger sized designs, was laid out on the table, categorized in different portfolio binders.

First-timer at Art Tattoo Montreal, Bégin said, “this is the first bigger convention so it feels really awesome to be a part of it.”

Artists with different styles and backgrounds lined up their kiosks one after the other.

All the way from Toronto, owners of Holy Noir Alex Daechsel and Hayley Schofield set up their booth and brought three of their four resident artists with them to the three-day event.

Schofield has developed a liking for tattoos from a young age. “I just like adorning my body with art and memories or images and memes that represent my life or my interests,” she said. 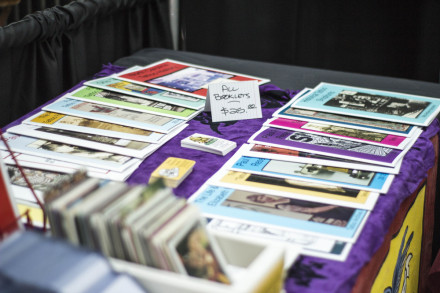 Before opening their shop, the pair owned a print business and distributed fine art printing specifically to tattooers, which led them to expand their network within the industry. “It just snowballed into us opening up a studio, and we grew organically from there,” said Daechsel.

“I think the beauty of the industry is [that] there’s something for everyone and it’s a way to express yourself individually,” she added.

However, the convention isn’t limited to tattoo artists. It includes those who are tied to the tattoo industry through disciplines other than tattoo design.

Based in North Carolina, Cohen and Eldridge own a museum, Tattoo Archive, which is also a working tattoo shop and home to their bookstore called BookMistress. Their vendible commodities include an extensive tattoo book collection and historical memorabilia, part of which was neatly spread out on the table.

“He writes a lot of [the little booklets] and he’s a collector. He’s been collecting since the 70s,” said Cohen. She explained that Eldridge developed a profound interest in the art and history of tattooing after he got tattoos himself.

Whether artists had dedicated a lifetime to the art of tattoos—honing their skills, mastering the craft, learning the history—or had just begun their career, they all came together to form one massive convention, attracting a diverse crowd who shares the same passion.