On April 22, 2018, Sporting Montreal Futsal Club was beaten 6-1 by Ontario’s Idolo Futsal Club in the final of the Canadian Championship. The devastating loss and the sight of team captain Mohamed Farsi in tears are two nightmares that have stuck with the club ever since.

Sporting Montreal is now back in the same spot they were last year. Club Manager and co-founder Enrique Benevides has spent the last 12 months ensuring there would be no heartbreaking repeat.

“The hardest part about last year was taking it one game at a time,” said Benevides. “The second we lost that game we immediately wanted to get back. Everyone was impatient to get to nationals again, but having success in Quebec is the first step, so we had to focus on that.”

The 6-1 defeat at the hands of a strong Ontario side meant that there had to be drastic changes made not only to the team, but to the way they approached every single game. Having a shorthanded squad due to injuries was only holding them back as they progressed to higher levels. 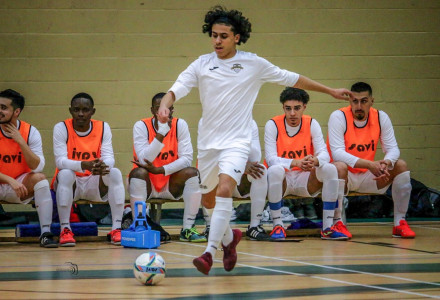 After a heartbreaking loss in last year’s final, Sporting Montreal is hoping for a better result. Courtesy Audrey Magny

“We revamped the team in a big way and brought in some key players that add a lot of depth to the squad,” said Benevides. “Tactically, we’re more unpredictable than ever and we have three lines now that we can adjust to suit any style of play we come up against.”

This change was something that goalkeeper and co-founder of the club Alex Fuentes felt the club was in desperate need of.

“Going to nationals shorthanded was unfortunate and in the later stages of the tournament it started to show,” said Fuentes. “It’s just like regular football. Teams with bigger squads and better tactics will have more success in the long run.”

Some of the players they brought in include academy players from their own system, as well as strong additions from other high level clubs. Regardless of the emotional scars the returning players experienced after last year’s heartbreak, getting new players on board was not difficult.

“The additions we’ve made are all players that are comfortable at high pressure games, said Farsi. “They all know how much this championship means to us and their quality has made us a stronger side.”

However, heartbreak is not the only motivator for Sporting. After falling to Idolon Futsal Club last April, the visual of Farsi in tears is a constant reminder that the Canadian Championships can be a cruel and unforgiving beast.

“Consistency is your best friend in tournaments like this since we play so few games,” said Fuentes. “If you play a smaller team or one that you’ve beat before it’s easy to get in your own head. We have to focus on winning our group before we focus on winning a title.”

After beating Manitoba’s Winnipeg Pioneers F.C. 4-0 and placing a 27-3 thumping on Nunavut’s Rankin F.C., Ontario’s GTA Futsal were the only team that stood between Sporting’s return to the final and a disappointing third place final. However, a dominant 8-4 victory has them through to the final on Sunday.