Testing Anonymity and Education Were At Forefront

The second instalment of the rapid HIV-testing clinic took place on Feb. 12 and 13, offering free HIV tests and condoms to students.

“We’re not there to test as many people as possible,” said Eduardo Malorni, student life coordinator at the Concordia Student Union. “It’s really more [about] everyone [understanding] how important it is and that it’s not bad to get tested. It’s not taboo.”

The rapid HIV-testing clinics usually take place in November and February, said Anne-Marie Lanctôt, manager of community health services at Concordia. They usually test around 24 students per afternoon, so around 100 students are tested per year.

Nurses from Health Services Concordia have a 20-minute conversation with patients before administering the minute-long test, said Malorni. They explain how the test works and the importance of getting tested regularly for HIV.

The nurse pricks your finger and uses a large drop of blood for the test, explained Gaby Szabo, a nurse and health promotion specialist with Health Services Concordia. Patients get immediate results, and the nurse talks to them about follow-up tests and ways to stay safe. 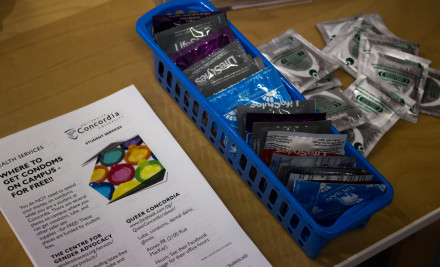 “HIV has life-long consequences, and a quick and early diagnosis can lead to a better prognosis or outcome,” said Lanctôt.

Another way of informing students is through the “Safer Sex 16” game, placed next to the reception desk outside the CSU office. Students can test their knowledge on the 16 ways of practicing safe sex and are entered to win a $50 gift card to the Concordia bookstore.

An essential part of the testing lies in its anonymity, something Malorni says was a crucial factor while organizing the event.

Both CSU conference rooms are used for testing, with curtains to cover the windows. After patients receive the test, only themselves and the nurse know the results.

“No one knows anything about what happened in the room, what they talked about, their previous sexual history,” Malorni said.

“People would come in very worried. Some of them would pace up and down the room beforehand,” he said. 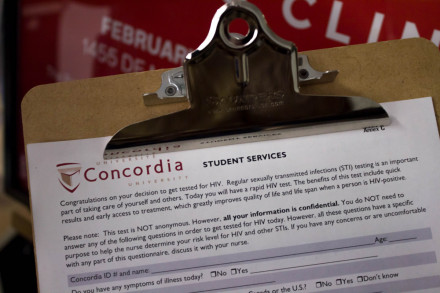 “It’s not something you’re used to,” he said. “You’re watching that all happen, then you watch them go into the room, you watch them leave the room, and a lot of the time they’re very, very happy.”

Most of the nurses’ job is to reassure patients. “They come in scared, and oftentimes it’s nothing,” he said.

The patient’s emotions came as a shock to Malorni, but he now regards this event as the most rewarding one he’s helped organize.

“You give people that mental calm that their fear isn’t actually true,” he said.

He admitted to his lack of knowledge on HIV, and made sure to inform himself ahead of time. He got in contact with Concordia’s nurses, and they instructed him on what questions to ask while at the reception desk.

“People have a lot of wide-ranging ideas about HIV. Some people understand a lot, and other people don’t,” he said. “They think shaking hands with someone with HIV can get them HIV. You would expect it’s something your grandparents think, but some people still think like that.”

Because of that gap in knowledge, they made sure to have more pamphlets available to explain how HIV is actually transmitted, alongside other sexually transmitted infections.

According to Szabo, people should get tested for STIs every six to 12 months, so Health Services Concordia plans on continuing to organize rapid-testing events on this timeline.