“We should have kept our foot on the gas and kept going. It’s easy to say now buy it’s pretty tough,” said Stingers defenceman Carl Neill.

Neill and his teammates’ season is over after a double overtime loss to the Queen’s Golden Gaels in the first round of the Ontario University Athletics playoffs.

Just a year after their first trip nationals in over thirty years, it is a difficult end to a season that began with high expectations.

What is even more difficult for players and fans alike is how the loss came about. Five minutes into the second period, the home team was up 3-0. Two of the goals came in dramatic fashion from captain Philippe Hudon who would be playing his last game if they lost.

The Stingers not only found themselves up on the scoreboard, but earning plenty of powerplay opportunities. They managed to finally convert on the man advantage for Hudon’s second goal after four chances.

It was the next set of penalties that began to turn the tide. It was an easy spot to point to for Stingers head coach Marc-André Élement.

“The 5-on-3. When you don’t score, you give them momentum,” explained the Stingers’ bench boss. 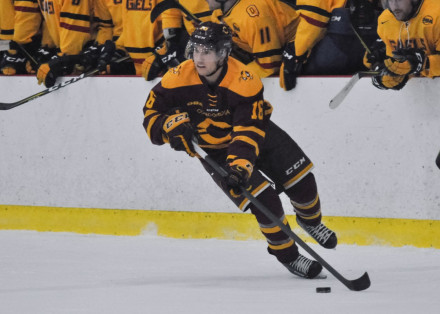 Though the score was 3-1 at this point, the Stingers were very much in control and drew back to back penalties to set up a 5-on-3 powerplay. It looked odd from the beginning, with three defencemen sent out while Hudon was relegated to the second unit to start.

To be fair, these three defencemen were some of the teams best players and powerplay producers in Neill, Bradley Lalonde, and Simon Bourque. The problem is that nothing came out of one of the most advantageous situations in hockey.

The aggressive play by the Gaels’ penalty killers surprised the Stingers according to Neill. The defenceman called the failure to score in such a situation unacceptable during such a key game.

From there, the visitors would score on their own power play later in the second, twice more in the opening minutes of the third and, though the Stingers would tie the game and play to a stalemate in overtime, ended the game early in double OT.

”It’s certainly the end of an unbelievable chapter for me […] it’s not the ending I would have liked but it was a hell of a ride,” —Philippe Hudon

For much of the game, it felt like watching the Stingers season unfold throughout five periods. The talent and flashes of brilliance were there. The first half of the game they looked dominant as they had for much of the season.

When playing at the top of their game this year, the Stingers looked like a team that could beat anyone. With combination of high flying offence and a deep, strong defensive unit, they beat teams like Ottawa and McGill, looking like contenders doing it. The problem is that that wasn’t the team fans saw every night.

Inconsistency was an issue both in their final game and throughout the year, particularly in the first half of the season. While the Stingers looked in control of the game early, the Gaels took control and ran the pace for chunks where the Stingers looked defeated. While they beat Ottawa and McGill, they also lost to weaker teams like Laurentian and UOIT and fell to Ottawa 8-1 as well.

Perhaps the inconsistency was a result of 16 rookies being on the roster, several of which joined the team in January, or injuries at the start of the year as well as at playoff time.

Whatever the reason, the highs and lows defined the Stingers beginning and end to their season. It was not the way the team wanted to end their captain’s career but Hudon certainly had a memorable final game in the maroon and gold.

“He went out with a bang. Two goals and an assist. He carried the team tonight. Carried the team last game too,” said Neill calling Hudon the best captain he’s ever had.

”It’s certainly the end of an unbelievable chapter for me […] it’s not the ending I would have liked but it was a hell of a ride,” said Hudon with nothing but praise and fond memories of his time with the stingers.

For now, after a career year, Hudon is waiting, pushing for a professional contract and the Stingers turn to new recruits and begin to plan for next season.