“Hu-don, Hu-don,” was the chant that filled the Ed Meagher arena after Friday’s game two loss to the Queen’s Golden Gaels. A standing ovation and cheers from the crowd are not the usual reaction to a playoff loss.

The chants had nothing to do with the result of the game though. They were for Stingers men’s hockey captain Philippe Hudon who, with the team’s loss and resulting playoff elimination, had just played his last game as a Concordia Stinger.

It had been a career year in points for the Stingers captain, a season of highs and lows for the team, and suddenly his fifth and final season with Concordia was over. A very clearly emotional
Hudon was surrounded by teammates before saluting the cheering crowd.

Despite the loss, Hudon was leaving a much different Stingers team than the one he had joined at the end of his major junior career. When he started his time with the Stingers, they were a team struggling to even make the playoffs, let alone compete. They were often fodder for top tier teams like McGill.

Now the team has made the playoffs four years in a row, is able to go toe-to-toe with the best teams in the league, and finished last season as one of only eight teams in the country to make it to nationals, with Hudon leading the charge. 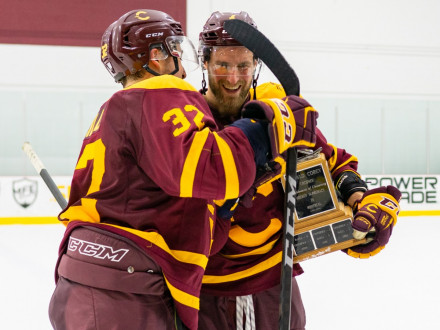 “He’s been one of the best captains to wear the C on his jersey at Concordia,” said head coach Marc-André Élement of the veteran.

This has all been the result of a culture change under head coach Marc-André Élement. The Stingers coach gives Hudon a great deal of credit, calling him a major force in the shift to where the team is today and the identity it developed.

Hudon’s coach isn’t just offering lip service there. Hudon’s legacy with Concordia is a lasting one.

The former Detroit Red Wings draft choice ranks twenty-fourth all time in points and nineteenth in assists among Stingers players, with 74 and 46 respectively in just over 100 career games. That’s not counting his contributions in the playoffs, a time of year he tended to excel. Hudon led the Ontario University Athletics in playoff goals, and was second in points in the team’s 2018 run to nationals.

He was also the first Stingers captain to bring them to that national stage in 34 years. It is the memory that stands out the most for him from his time at Concordia.

“That was the apex of my time at Concordia but every year, something new and great was happening,” said Hudon, smiling as he remembered his five years as a Stinger. While there’s a great deal of pride in all of these achievements, Hudon hopes that those around him can keep his charter and ethic in mind even more so.

“If there’s one thing I’d love for [my teammates] to remember or keep from me it’s […] just work until the last second. It doesn’t hurt, I’m still alive, I’ve still got my limbs,” said Hudon. “It’s just a question of working. It’s that much more rewarding. Being proud of playing for a great organization.”

That was the kind of player Hudon was on the ice in his years at Concordia—a worker. There was plenty of skill and talent, but the effort was what stood out. He was always a physical presence, a heavy hitter with a strong defensive instinct for the game. Coupled with a hard, accurate shot and a willingness to, as his coach put it, “pay the price,” Hudon was a force for the Stingers.

“If there’s one thing I’d love for [my teammates] to remember or keep from me it’s […] just work until the last second.” —Philippe Hudon

He was a clear choice for the captaincy when Olivier Hinse graduated at the end of the 2016-2017 season. Respected by teammates and coaches alike, the regard for Hudon is always evident.

“Phil’s a heck of a leader. He’s the best captain I’ve had for sure,” said Stinger Carl Neill after Hudon’s final game. Neill, an assistant captain, has been suggested as a possible successor to Hudon’s captaincy by coaches in the past.

Neill and his teammates’ praise for Hudon always focused on his leadership, ability to step up in key moments, and strong character both on and off the ice.

As Élement put it, “He left a big big footprint here. I’m very proud of what he did at Concordia.”

Now, Hudon prepares for the next chapter. While he is graduating from Concordia’s John Molson School of Business, he is looking to sign a professional hockey contract moving forward. With 25 points in 28 games along with a year of strong defensive play, he’s certainly given scouts reason to look at him.

With that waiting game on the horizon and the season behind him, Hudon can take some time to look back on his Stingers years and see how much he’s done and how far he’s come.

“I’m very fortunate to have been there since the beginning and watch the team grow and making [nationals] to end a 30 odd year drought,” said the captain. “It just makes me feel like I was part of something a whole lot bigger than me. I’m very appreciative of that. It’s something I’m gonna remember for the rest of my life.”