That’s how Stingers men’s hockey captain Philippe Hudon sees the year ahead of him. Heading into his fifth and last year of eligibility as a student athlete, as well as his final year of studies, Hudon is on the final pages of an important chapter in his life.

Last year was an up and down one for Hudon. The Stinger missed time early in the year and experienced a weak first half of the season. Despite that, he ended on a high note of a powerful playoff performance that propelled his team to their first berth at nationals in over three decades.

Thanks to that turnaround ending, Hudon is headed into the 2018-2019 season with a new perspective on hockey.

He’s pushing harder than ever to secure a future in the sport as a professional while finishing his studies and looking for a place in the workforce.

That’s plenty to handle on top of captaining a team facing sky high expectations after being one of only eight teams in the country to make it to nationals.

Stingers men’s hockey head coach Marc-André Élement believes Hudon can handle it, though. When Élement talks about his captain, the words “professional” and “leader” are stressed and often used.

“The way he acts on the the ice, the way he prepares himself, the professionalism that he has, that’s [what] makes him a great, great leader,” said Élement. “[His teammates] see it and they know that he’s a good leader.”

Hudon has earned himself a reputation for stepping up when it comes to new players in particular. For a rookie player coming out of a junior league and suddenly playing against big, fast 25-year-olds in a new city, having an experienced player take you under their wing can mean a lot.

Sophomore Stinger and alternate captain Carl Neill got that treatment first hand from Hudon last season. Hudon had been drafted by the Detroit Red Wings several years earlier, so he had some insight on what his new teammate might be feeling.

“We went through kind of the same thing,” said Neill, who was drafted in the fifth round of the 2015 NHL entry draft by the Vancouver Canucks. “We were really on the same page […] he showed me the ropes when I came in.”

Now a leader himself and a member of U Sports’ all-rookie team, Neill sees his captain lending a hand to this year’s large rookie class. One of those new recruits is Hudon’s new linemate, centre Hugo Roy who’s already looking to the captain as an example to follow both on and off-ice.

While having his teammates’ respect is surely helpful, it won’t change the fact that Hudon is headed into a year filled with pressure.

Those pressures start off-ice for the 25-year-old but certainly don’t stop there. His team may have made a splash last year, but they also lost their two top scorers to professional contracts in the offseason. They brought in some strong rookies but the team is definitely a green one right now.

There will be pressure for him to pick up some of that offensive slack as a leader and top line player. His playoff performance will certainly provide some confidence on that front.

“It revived my passion. I’m more passionate about hockey than I ever was.”— Philippe Hudon

His teammates certainly took note of that and expressed their confidence in their captain’s offensive capabilities. “He steps up when it’s time to step up. I’m not too worried about Phil, I’m sure he’ll have a great year,” said Neill.

Hudon’s production is as important to his future as it is to his team’s success. He knows he’ll have to turn some heads and get people talking to get any contract offers at the end of the year.

“It’s a period of uncertainty where you’re not sure where you’re gonna end up. It’s scary. With hockey you don’t necessarily apply, they come to you,” said Hudon of the year ahead of him.

Over the years Hudon has learned to deal with this kind of stress, though. He’s heading into the year more organized and energized than past seasons. He knows looking at the big picture isn’t helpful; he is focusing instead on the smaller things that he can control.

His coach is very open about his thoughts on the captain’s future.

Hudon certainly didn’t have that kind of confidence at his lower points last season. While he says the captaincy helped him grow, it was also a difficult position for the then-first year captain.

“It was a difficult season for me […] maybe I was taking charge of too many things when I should have focused a bit more on myself,” said Hudon.

While his team was having success, Hudon had difficulty producing during the fall semester. He scored only two goals and wasn’t playing the game that would make him successful.

A lot changed after the winter break. 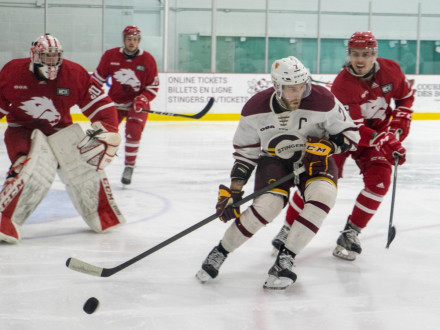 “It was a turning point. At the start of 2018, I set myself an objective to focus more on my game and what I’m good at rather than focus on other people’s games,” said Hudon. “By doing that and just enjoying hockey instead of being very analytic and criticizing people’s games, that’s when I started taking off.”

Hudon looked like a different player. He was consistently engaged and playing a hard-nosed, defensively sound game while threatening opposing goalies with a booming shot. He found what worked for him and what made the team around him better as a result.

This shift and the run to nationals that Hudon played such an integral role in were more than just a stat sheet bump. The difficult season had started to weigh down on Hudon and had him questioning his future.

Every athlete that plays at a high level reaches a point where they have to decide between continuing to fight for their dream or deciding it’s time to hang up the skates and move on from the dream that pushed them for years.

Hudon learned to skate at two years old. He’s played competitive hockey since age four. Suddenly he started to question his future in something he had always known.

Those final weeks of the season and the run to a place his team hadn’t seen since before he was born gave Hudon a real change in mindset and hope. It’s why he’s going into this season feeling so ready and excited.

“It revived my passion. I’m more passionate about hockey than I ever was […] I really want to pursue something after Concordia,” said Hudon.

Now the Stingers captain is focused on ending his time as a Stinger on a high note with another run to nationals. When Hudon started with the program, it was on a team struggling for relevance. Last year they were among the eight best in Canada. He’s been on both ends of the spectrum and he plans to leave the team on the right one.

Looking back on the journey that brought him to where he is now, Hudon says he wouldn’t go back or try and change how he’s done things.

“I’ve grown and I’ve learned a lot that will prepare me for what comes next,” said Hudon. “I wouldn’t say a damn thing to myself five years earlier because I would want to go through that experience and that learning process.”