Montreal Protest Held in Response to Airstrikes in Syria

Protesters gathered at Norman Bethune Square Sunday for an emergency rally opposing President Trump’s recent airstrikes. The U.S. government retaliated against the Syrian regime for the chemical attacks allegedly conducted by the government on April 4.

The protest that happened last Sunday, April 9, was organized by the Syrian House in Canada, a community gathering Montrealers of Syrian origin. 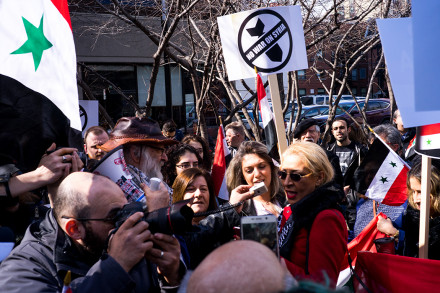 Several organizations and individuals also joined the protest, from political parties like Quebec’s communist and marxist-leninist parties, to women activists and artist groups. The Greek Workers Association later joined the protest to show their support for the cause. The majority of protesters were supporters of Syrian head of state Bashar al-Assad.

Pro-Assad Syrians: “We support Bashar al-Assad because he fights terrorism”

Syrian refugees took up the megaphone to share their plight.

“I was approached by the media to say what Syrians have been going through,” refugee Myriam Keyloun claimed. “But our suffering is not enough. Do we not match what the world wants to see? We support Bashar al-Assad because he fights terrorism.”

Keyloun came to Canada in January 2016 because her family and herself were targeted by “islamist groups” and had to flee through Turkey to join another part of her family staying in Canada.

She added that Syria should deal with the war by itself unless the government legally asks another country to intervene.

“No investigation” to justify “imperialist strikes”

Artists for Peace, an organization of artist-activists that opposes injustice through the promotion of the arts, was also there to protest the strikes. Artists for Peace member Pierre Jasmin argued that the Canadian government should not support its American ally in this endeavor, and that they should pull out from NATO altogether.

“There has been no investigation. We don’t know if the gas came from the government… or the rebels! We firmly stand against all wars, and against Trump’s actions, and Trudeau’s endorsement,” Jasmin said. 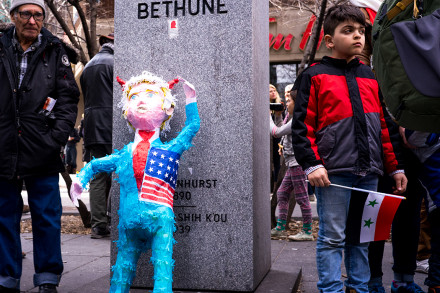 The chemical attacks have been attributed to the Syrian government by Western media and governments, including the governments of the United Kingdom and the United States.

The Syrian government denied having used sarin gas on Khan Sheikoun, the Syrian town that was targeted by the chemical attacks. Russia issued a statement claiming that Syrian aircrafts targeted a “terrorist ammunition depot” that would have contained chemicals and caused the disaster. Security experts such as veteran and security writer Dan Kaszeta point out severe inconsistencies in Russia’s explanation.

Two speakers from Women of Diverse Origins, an organization that contributed to organizing women marches on March 8, also denounced how hasty the retaliation was. Members Marie Boti and Amelia Moreno called the bombing a “violation of international and domestic laws.”

Throughout the protest, speakers established a parallel between the current geopolitical uncertainty in Syria and the American allegations that the Iraqi state had in its possession weapons of mass destruction back in 2003. Those claims were used to support the following U.S. intervention in Iraq, and were invalidated by later investigations.

Denouncing a “double standard,” Moreno explained that Women of Diverse Origins does not “support authoritarian regimes” and therefore opposes Saudi Arabia’s involvement in the movement against Assad on Syrian grounds. The Saudi government helps insurgent groups opposing the regime and the Islamic State and participates in the US-led coalition.

Jooneed Khan, a journalist who spent thirty-five years covering international politics for La Presse, also spoke out against Trump’s military strategy. Khan argued that this strike did not only target Syria, but is actually a proxy attack against Brazil, Russia, India, China and South Africa. Currently, the Syrian regime is backed by Iran and Russia, while the US-led strikes are supported by Turkey, Saudi Arabia and Jordan. To Khan, the composition of those two sides symbolizes a new era of international relations where emerging powers are more potent.

He admitted to entertaining some hope after hearing Trump’s previous isolationist political stance, but argued that anti-strike protests throughout the world show that there is an ongoing “change in the international order.”

“This is an imperialist aggression,” explained Adrien Welsh, a member of the Communist Party of Quebec. “These strikes against Syria are war crimes coming for the U.S and their NATO allies. It adds another nail in the coffin and terminates any hope for a peaceful resolution of the conflict.”

There was no voice at the rally that was critical of Assad’s regime and actions and could have been interviewed by The Link.