In the middle of stoppage time, the Concordia Stingers women’s soccer team stole a point from the Université du Québec a Montréal Citadins at home on Thursday night.

To bring the score to a 2-2 draw in their Réseau du sport étudiant du Québec opener, the Stingers didn’t shy away from a controversial play. At the edge of the 18-yard box, the UQAM goalkeeper and Stingers forward Sarah Humes both rushed and slid for the ball. The contact was heavy and the goalkeeper remained on the ground.

“Yes it’s contentious, [but] the referee calls the game and he didn’t call [a foul],” said head coach Jorge Sanchez of the situation on the play.

At the right place at the right moment was Stingers right back Kate Evoy. As the referee let the play continue, the Calgary native took possession of the ball and kicked it from the right side of the box into an empty net to tie the score with minutes to go in the game.

“One player that for me stood out was [Kate Evoy], said head coach Jorge Sanchez. “She was the only pure rookie starting and what a great game and scores the tying goal right at the end. I’m pretty proud of that effort.” 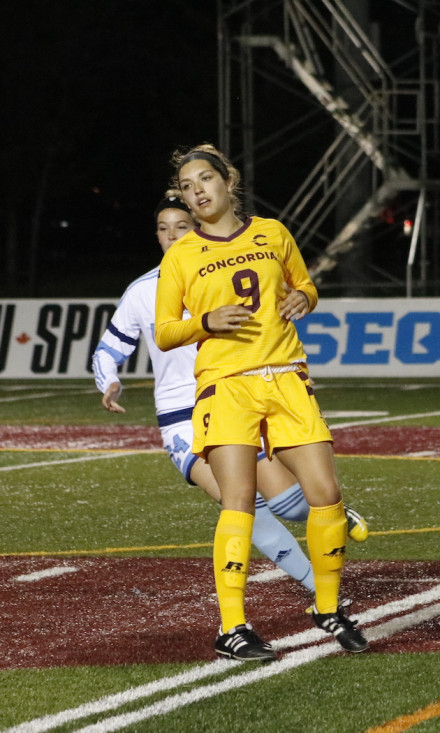 Along with Imane Chebel, Valérie Arenal (number nine) received praise from her head coach as one of the best defending partnerships in the RSEQ this year. Photo Alex Perez

“It was really exciting, overwhelming,” she said. “It’s nice to start the season on a good note and to go forward with that confidence is always nice.”

Knowing that the play was controversial, Evoy admitted that with the 2-1 score-line, the stoppage time play was going to be rough in order to push for an equalizer.

“I think when the goalie has it, you just gotta keep pushing there and she can always rebound it back in,” said Evoy. “You got to put in the work to make sure that if it does end up [in a 50-50 situation] you got to win that and put in the back of the net.”

The rookie right back is part of the maroon and gold’s new and improved back line. Having contained the Citadins to a clean sheet for 66 minutes, there is a positive aura around what the team can bring defensively.

Sanchez mentions that that, for once, he can actually rely on “bulk” for his team. The coach is also really confident for his central defending partnership of Imane Chebel and Valérie Arenal.

“Personally, I think that they’re one of the best duos that we’re going to see in the league this year. Their size, their athleticism, their smarts with the ball,” said Sanchez mentioning their size, athleticism and intelligence on the ball.

Another partnership that Stingers fans picked up from the stands on Thursday night was the understanding between central midfielder Chama Sedki and striker Sarah Humes.

Throughout the game, Sedki was trying to find her teammate with through passes. Humes’ goal came from this very partnership, receiving the ball in her run at the perfect place to open the score for the Stingers.

“Chama, she is our middle, she’s our voice and so I know as soon as she has that ball she’s trying to find a pass,” said Humes. “I try to get open for her, I know she can send a perfect ball anywhere on the field so it’s very nice to have her on the middle as a striker.”

With the point against UQAM, the Stingers head into the RSEQ Fall season with confidence. Having the playoffs as an objective, getting results against team that were above Concordia last season was on their minds and they did just that.

“That’s the fourth placed team. If you want to climb in the playoffs you have to start attacking the teams before us,” said Sanchez. Not a lot of teams we’re competing with are going to steal points from them. It’s a moral victory but we went and got the point as opposed to giving away two points today.

With a point in hand, the Stingers now head to Lennoxville to take on the Bishop’s Gaiters Thursday night at Coulter Field.