Their misfortunes continued on Saturday afternoon, extending their losing streak to eight games after losing 67-57 to Université du Québec à Montréal Citadins at the Concordia gym. 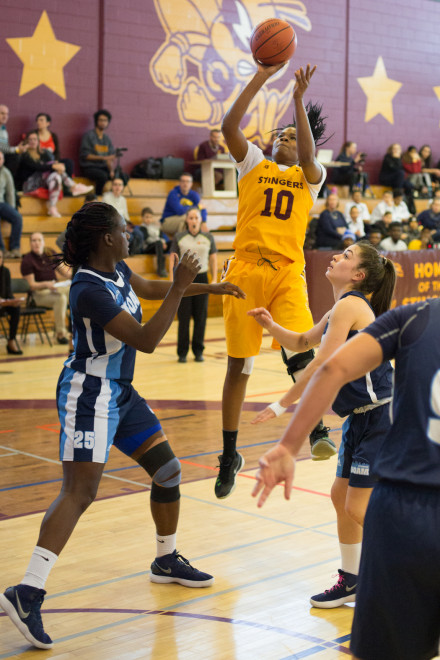 The Stingers will have a week to prepare for their game against the McGill Martlets next Saturday. Photo Daren Zomerman

Concordia’s defensive lapses in the first quarter proved costly for the team early on. The Stingers had difficulties converting their offensive opportunities, allowing several UQAM fastbreaks in the process.

The Maroon and Gold kept it close in the first quarter, as they were only down by five points, but couldn’t find a way to catch up to the visitors.

On offence, the Stingers struggled to put up the points. They shot a paltry 27.6 per cent from the floor compared to UQAM’s 38 per cent. The home team couldn’t capitalize on their opportunities.

To make matters worse for Concordia, guard Aurelia d’Anjou Drouin limped off the court with the help of the physios. While going after a loose ball, Drouin, who already had her foot strapped with a brace, dropped to the floor clutching her ankle. She was ruled out for the rest of the game.

If there’s one positive take away from the game, it’s Sabrina Stambouli. She went five for ten from behind the three-point arch en route to a game-high 16 points in 25 minutes off the bench.

The newcomer is making a good first impression since joining the team in the new year. Her 40 per cent hit rate from three-point range is tops on her team, with only 30 attempts so far.

The Stingers will host national champions the McGill Martlets next Saturday.