Stingers Women’s Hockey Team Makes a Statement in Game One

Remember when Concordia head coach Julie Chu told reporters that she didn’t expect to see any 5-0 games in their playoff series against the University of Ottawa Gee-Gees after narrowly beating them on Sunday?

Twelve seconds into the best-of-three series against the Gee-Gees last night at Ed Meaghar arena, the Stingers were a fifth of the way there, courtesy of a Sophie Gagnon penalty shot goal. By the way, Gagnon also scored the game-winning goal on Sunday. 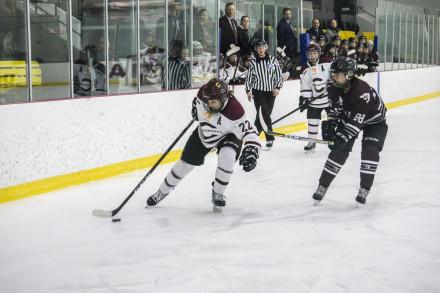 The Stingers will travel to Ottawa on Saturday looking for a sweep of the Gee-Gees. File Photo Elisa Barbier

Six minutes later, that lead was doubled thanks to a Vyckie Gélinas marker. The Stingers forward had not found the back of the net since scoring her only goal of the regular season on Jan. 28 against the Gee-Gees in Ottawa.

“A goal always feels great and it came in the first period which gave us momentum,” said Gélinas.

Her goal marked the last one in the game scored by someone not named Audrey Belzile. Recording her second hattrick of the season, Belzile continued to build on her reputation as a scorer while defying the prophecy laid out by her coach less than a week ago.

After finishing with a team-high 11 goals in the regular season, the forward picked up right where she left off.

“Seriously, I don’t know,” said Belzile when asked how she keeps scoring so many goals. “I think I’m just at the right place at the good time. The passes are coming and I just shoot and it went in.”

A five-goal outburst isn’t exactly what the team was expecting, but it’s something they’d gladly take.

“We needed to start on time,” said Chu, who was also celebrating the United States’ national women’s hockey team’s gold medal victory at the Olympics the night before. “We didn’t and Ottawa took it to us in the first period the last game and we knew that when we let that happen we play with fire.”

Though the Stingers were able to come back from a 2-0 hole to beat Ottawa in their last game, mounting a comeback is a difficult thing to do, Chu said. She praised her team’s preparation, saying that they knew they needed to have a “great first shift and a great first period.”

Belzile also mentioned her team’s preparation as a key factor in the win. The Gee-Gees had been a tough out for the Stingers all year, losing the five-game regular season series with them by a game. She said her team wanted everyone to know that it was “luck,” and that Concordia wasn’t at their best whenever they faced Ottawa. 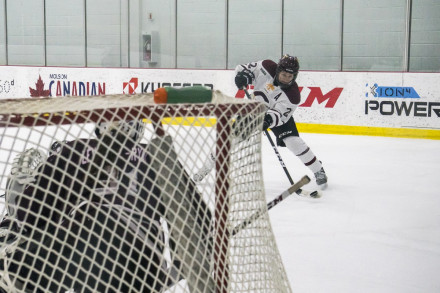 Concordia is a win away from earning a ticket to the U Sports national tournament in London, Ontario. File Photo Elisa Barbier

“We did a lot of video, to analyze their power play, [penalty kill], forecheck,” said Belzile. “We wanted to show them that in the playoffs, that’s our real team, and the score just showed it tonight.”

Clearly, that attention to detail paid off for them. Four of the five Concordia goals were scored on Ottawa goalie Maude Levesque-Ryan’s blocker side.

“She’s super big, but when we come closer she [crouches down], so it opens up the left side,” said Belzile. “So, we shoot there.”

On the other end, it was a clean sheet for Concordia goaltender Katherine Purchase. The Commerce and Administration Students’ Association’s newly-minted vice president of academics made light work of the 14 shots she faced during the game, stopping all of them.

Prior to the game, Concordia’s director of athletics D’Arcy Ryan honoured the members of both teams who earned individual awards for the Réseau du sport étudiant du Québec’s regular season. Stingers forward Lidia Fillion won the RSEQ’s rookie of the year award, while Claudia Dubois, Marie-Joëlle Allard, and Belzile were all named to the league’s second-team all-star roster.

The series now turns to game two, which will be played Saturday afternoon in Ottawa. The Stingers know that with a win, they’d get an automatic bid to the U Sports national tournament, hosted this year in London, Ontario.

“We want the sweep. We want to play like today and destroy them again,” said Gélinas. “We want to start in the first minute of the first period, and keep pushing until the end.”