With the return of Sami Ghandour (11 points, seven rebounds) to his team, the Stingers appeared to be difficult to knock down.

“My shoulder is fine. No pain no nothing. I’m getting back into it now,” said Ghandour who made his first appearance of the season on Thursday against McGill. “We knew what we were going to get into. We had two big games this week. It was a good week for the team.”

Head coach Rastko Popovic was more than happy to have Ghandour back in playing shape.

“I played him way too much. I asked him to go out and compete and he said yes,” said Popovic. “He’s such a smart player on the floor. He knows what to do. Having him back is really gonna help us.”

With Olivier Simon’s career-high 32 points on Thursday against McGill, the Stingers kept momentum, as fifth-year Ricardo Monge hit a milestone in his career.

The senior executed a career-high 12 assists and 24 points on Saturday against the Gaiters.

“I think I played the same way as I usually play. I really don’t know, I didn’t do anything additional to get those assists. My teammates were making shots as well,” he said. 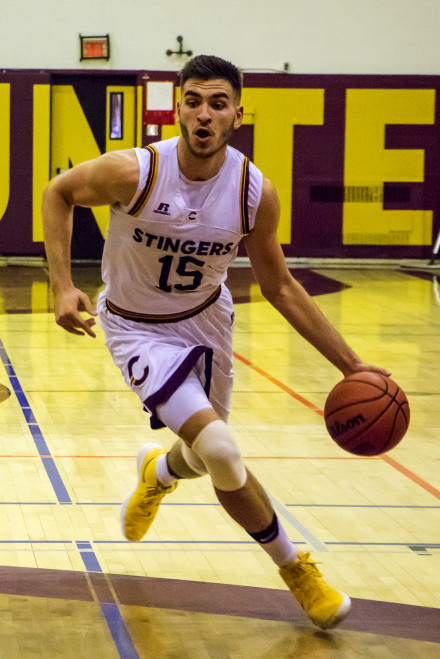 Olivier Simon and the Stingers snapped the Gaiters unbeaten streak to take over first place in the RSEQ. Photo Elisa Barbier.

Adrian Armstrong delivered 22 points for his group and Garry Merisier added six rebounds for the Stingers.

“They’ve been sharing the ball and executing offensively so I’m happy with that,” adds Popovic.

The Gaiter’s had gone undefeated since the start of the season, and the Stingers came into this game looking to end their streak.

“That’s what we wanted to do going into the game today. Not to say anything bad about their team. But we didn’t feel like [Bishop’s] deserved to be at the top. That’s why we were motivated to take their spot,” said Monge.

With one of their leaders, Joany Castor Thadal, out with an injury, the Bishop’s Gaiters weren’t able to pluck their fourth consecutive win against the Stingers.

Kamane was last season’s RSEQ leading scorer. He carried the Gaiters on Saturday, grabbing 26 points with his teammate Kevin Davis acting as a helping hand, scoring an extra 26 points and seven rebounds.

“I don’t think that we showed up to play defensively. We made way too many mistakes […] It’s a seven-point game that turned into a 16 point game,” said Gaiters head coach Rod Gilpin.

“Not to say anything bad about their team. But we didn’t feel like [Bishop’s] deserved to be at the top. That’s why we were motivated to take their spot,” —*Ricardo Monge*

Gilpin mentioned that if Gaiters Thadal and Zion Vervroegen-Thomas were playing, that it would have definitely helped the team. He said that they would have had more options and that he hopes that Thadal would be back this upcoming week.

It was a sterling week for Concordia Stingers basketball as both the men’s and the women’s teams took two wins this past weekend.

It’s essential to mention that the Stingers have demonstrated noticeable maturity within their players. The veterans seem to what needs to be done and how to do it.

“Everyone that was here is pretty much back except for Schneiders Suffrard and Ken Beaulieu, so we definitely grew as a team. We’ve been having the same core for three years now, pretty much,” said Monge.

The Stingers are officially first in the RSEQ with a 3-1 record. Saturday, Dec. 1 is the day where the Stingers meet contenders, the UQAM Citadins at the Loyola gym.

Thursday, Nov. 15th, the Citadins destabilized the Stingers beating them by 17 points on their home court, in front of a crowd of nearly 1000 people.

“We’re going for their heads for sure. We gave it up when we were at UQAM. We’re coming with a different mentality. More aggressive,” said Monge.

Popovic and his squad will be coming out to defend their home court next Saturday against the Citadins.