Concordia’s women’s rugby team suffered their second loss of the season on Sunday.

After a slow start, the Stingers were down 24-0 22 minutes into the game.

The team suffered at the beginning of the game on their right defensive side. Laval’s winger, Agathe Isabel, harassed Concordia’s defensive line on her left side, scoring three tries in the matchup. Her teammate Laurie Houle also scored three.

After 32 minutes of play, Laval led 29-0. Their coach Kévin Rouet was satisfied with his team’s start.

“We had a good first half, and overall dominated the game,” he said.

Nevertheless, the Stingers did not let their spirits down and managed to score a try at the very end of the first half. The team was in defensive trouble when Jasmin Baxter, a first-year back, intercepted a pass and ran more than 80 meters to score the Stingers’ only first half try. 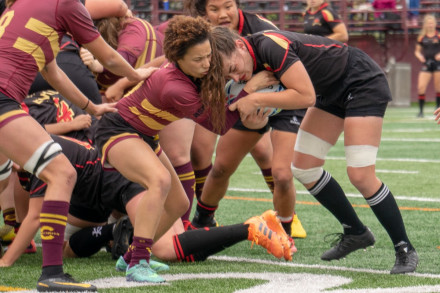 This loss is only their second of the season, which brings their record to 2-2 with three games remaining in the regular season. Photo Elisa Barbier

“I was running down the field and I thought I was by myself but I saw two players chasing me, and I accelerated,” said Baxter.

Kirsten Trafford missed the conversion, but the try helped the team get back into the game, and build on the momentum in the second half.

Even when the team was down 29-5, Concordia’s bench never stopped encouraging the team, pushing for more, and demonstrating strong team spirit.

After the break, the Stingers were more energetic than their opponents. They had two offensive attempts within two minutes. Unfortunately, Laval scored one more try three minutes into the second half.

The Stingers never stopped pushing, but Laval were more creative.

After 46 minutes, Laval’s Véronique Gagné pierced Concordia’s defensive line. She kicked the ball near the ground caught it, and was only tackled 30 meters later after a long sprint. 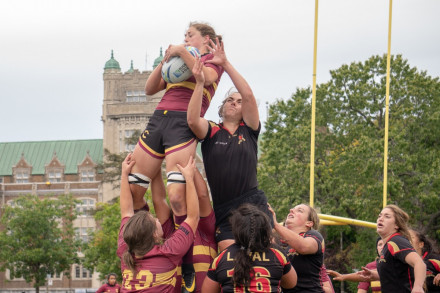 The girls relied on strong team spirit to rally for a final push in the second half, but their efforts were just not enough. The team will look to return to a winning record in next weekend’s game at Université de Montréal. Photo Elisa Barbier

The Stingers scored two tries in the second half, coming from Emily Kyte after 72 minutes, and finally Tess Armstrong in the very last moments of the game. Jasmin Baxter converted both, to bring the team up to 19 points.

Rouet attributed his team’s loosening in the second half to the bus ride from Quebec, that led to players being tired, and having heavier legs than usual.

“We did not plan on playing defence in the second half. The game did not end the way we wanted, but overall I think we had a strong performance,” he said.

“The team spirit is a reflection of who we are, and today was a great example of our character I thought,” she said.

She was satisfied with her team’s overall performance.

“Our scrimmage and set pieces are pretty good, so what we need fine tune little details mostly, to come back strong next Friday at the Université de Montréal.”