With a 17-0 shutout, the Concordia Stingers will not only advance to the Réseau du sport étudiant du Québec finals, they will have also gone 16-0 over the last two seasons.

The team has not lost a single regular season or RSEQ playoff game since the start of their championship run last season.

“We had a large group of players returning. Having a good year last year and having so many guys returning is nice,” said head coach Craig Beemer. “You really get to build on your successes of the previous season.”

That building has been particularly present in one key facet of the Stingers’ game: defence.

The fact that they shut out Sherbrooke follows a pattern of stifling defensive performances the team has come up with this season. 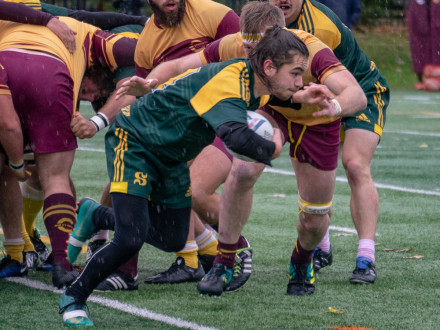 With this victory, their win streak in the RSEQ is extended to 16-0, spanning from the beginning of the 2017-2018 season to now. Photo Elisa Barbier

“This year our main focus was the defensive component,” said Stinger Lucas Hotton, who scored the game’s first try. “Last year we had a tough time at nationals and that was the moment we realized we really gotta work on our defense. I think now the results are really showing.”

Beemer praised his team’s strong defensive showing against Sherbrooke, focusing in particular on how precise the tackling was and just how quickly players were able to get up after hits despite a rain covered field.

Fans and players alike shivered through the game that saw heavy winds and rain that soaked the field. Passes were dropped plenty on both sides as the wet ball refused to be handled easily on either side.

Those weather constraints may have played a part in the low score that surprised many after the last match between Sherbrooke and Concordia ended 66-7.

“It probably kept them off the scoreboard and kept us lower than we wanted to be,” said Beemer, who saw 11 of his players honoured as RSEQ all-stars in a pre-game ceremony.

While the weather may have made life difficult for most of the players, there’s one who didn’t mind it too much. Moritz Wittman was named game MVP by the Stingers and scored a long drop goal to put his team up ten nothing.

“I had the wind at my back, if it had been the other way I never would have even tried it,” said Wittman of the benefits of the hectic weather 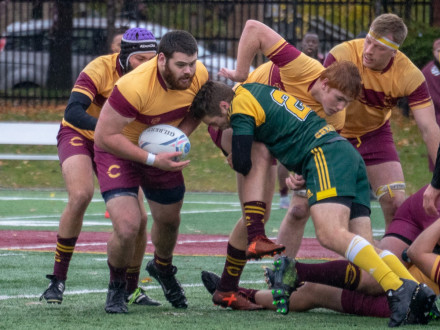 The Stingers will face the Bishop’s Gaiters in the RSEQ final this coming Saturday, after the Gaiters stunned the second place McGill side in their semi final matchup. Photo Elisa Barbier

His teammate Hotton was a little less happy with the weather, noting that players had to run straight into contact rather than trying to play the ball too much in slippery conditions. Though he did laugh and admit it was easier than playing in the snow and hail like they did the week before.

With Sherbrooke in the rearview mirror, the Stingers turn their eyes to the next opponent: Bishop’s University. Bishop’s surprised rugby fans, defeating second place McGill 19-17.

The only matchup between Concordia and Bishop’s was a 48-16 away win for the Stingers earlier this year.

“They’re a good team, they’re a young team,” said Wittman. “Next week the key is gonna be defence again. Don’t let them have the idea that they can play against us.”

While players and coaches are continuing their practice of one game and one day at a time, they’re also feeling confident that if they play to their capabilities, they should be ready for a strong final.

“Most teams aren’t gonna be able to run with us if we play to our strengths,” said Wittman.