Despite Frustration With Officials, Stingers Come Out on Top

Concordia’s women’s basketball team kicked off their Concordia Classic tournament with a 71-58 win over Memorial University.

Their crushing offensive domination was coupled with a strong defense which gave Memorial only a few chances to start. Burgonio misled her opponents from left to right, showcasing her skills. The Stingers seemed to be water-skiing while the visitors had their heads deep under the water.

The second quarter saw Memorial University taking more shots than they had in the first quarter. But Concordia continued at the same level of intensity, harassing their opponents on defence and taking shots.

Sydney Stewart, Memorial University’s point guard, scored two back-to-back threes, bringing the morale of her team back up. Concordia’s first-year forward Gretta-Olivia Ineza and Task had one each in the quarter. The intensity of the game led to some contentious plays. Concordia’s head coach Tenicha Gittens let referees know she did not agree with some calls.

“Refs don’t favour me too much because I run my mouth a lot, but it’s my job as a coach to defend my players,” she said.

The Stingers still managed to widen the gap separating them from their opponents, 40-19 at halftime.

Memorial University came back from the locker room pumped up and willing to show their strength as a team. Thanks to many converted free-throws, and inconsistencies in Concordia’s offensive plays, Memorial came back within arm’s reach from Concordia. The Stingers seemed impatient in their plays, and had trouble getting the ball around their opponents’ paint.

“We’re at our best when we move the ball and when at least three or four hands touch it before a shot goes up. We went away from what we normally do,” said Gittens. 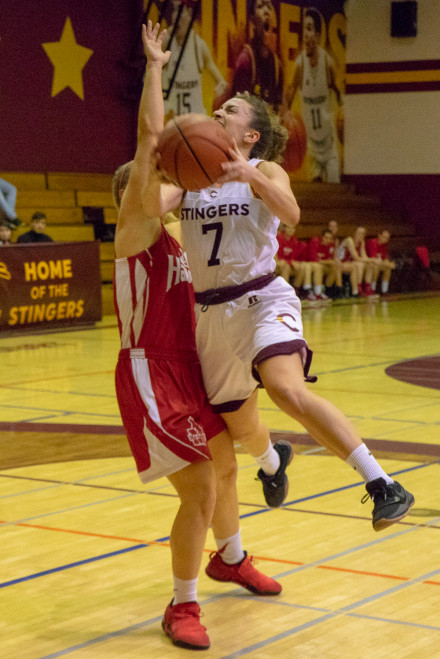 The team is back in action on Saturday when they take on UPEI in their second game of the tournament. Photo Elisa Barbier

The Stingers saw a number of fouls called against them in the second half, adding to the players’ frustration. Both coaches were told to calm down by seemingly overwhelmed referees.

“Refs have to do a better job at controlling the game,” said Gittens.

Memorial’s momentum ended in the second half of the fourth quarter. First-year player Myriam Leclerc marked the end of their domination with a three-point shot from the bottom of the court.

Concordia finished strong and ended the game with a 13 point lead.

Gittens was satisfied with her team’s first half, and hopes that they will manage to keep their composure under pressure from their opponents and the referees.

“We were not disciplined defensively. We were allowing them to penetrate our defence and get into gaps, and that’s what happened,” she said.

Concordia’s head coach was nevertheless glad with her team’s performance and reaction.

“It was a good game for us, because there was a storm to weather,” she said.

Concordia will be playing again Oct. 6 at 4 p.m. against the University of Prince Edward Island.