While the Concordia women’s rugby team did not necessarily come in expecting to win in Friday night’s game versus Sherbrooke, they definitely showed up to play.

“We were really close for a couple minutes, and then just had a big turnover that changed hands and then we ended up in our end zone,” said head coach Jocelyn Barrieau. “We were pretty close, but we fought for 80 minutes so that’s a really unbelievable feat for this team to get together and do that.”

Barrieau noted that overall the biggest weakness shown by her squad was lack of experience. That’s not a knock on the caliber of her players, rather, her team is largely made up of first and second-year players who have yet to rack up significant university minutes.

“I think as a group we just have to go out and play more rugby and get a good winter training in us,” she said. “I think that once we do that we’ll be able to do some pretty good stuff in a game like this.”

What the team lacked in years of experience, they made up for in drive and heart.

Despite the Sherbrooke side’s high level of skill and physicality, the Stingers put in their best effort, often coming close to their opponent’s try line but just missing that little bit of push to finish. Sometimes this came in the form of a dropped pass or Sherbrooke managing to hold Concordia up from placing the ball down to cement a try.

While all their effort may not have paid off all the time, they were rewarded fairly early on in the game when they broke down the Sherbrooke defence to score their first try of the game.

All that effort paid off, The_Stingers</a> score their first of the game. Successful conversion too. 12-7 Sherbrooke.</p>&mdash; Ireland Compton (IrelandCompton) 12 October 2018

Second-year player, Emily Kyte, was pleased with her team’s performance despite the tough loss.

“The rookies that came in this year were super committed; I couldn’t have asked for better rookies,” she said. “We just showed a lot of heart which was one of our goals for this season, but we had so many setbacks this season, so it was just nice to see everyone out here give their all and it was one of our better games this season.”

The Sherbrooke side was organized and physical, a strong presence on both offence and defence, which challenged the Stingers until the very end. The Vert et Or had a number of fast offensive players which made it so Concordia’s forwards really had to buckle down and make those big tackles.

Kyte herself had a big run, demolishing a Sherbrooke player to make space for herself in the end zone, scoring her team’s second of the night.

In spite of all their efforts, the Stingers just couldn’t best their opponents. Sherbrooke was simply stronger and more experienced, but that’s something the Stingers squad hopes to become in the coming seasons.

With this loss, the Stingers fail to leapfrog Sherbrooke, who lie ahead of them in the Réseau du sport étudiant du Québec standings, missing the playoffs for the first time in over ten years. 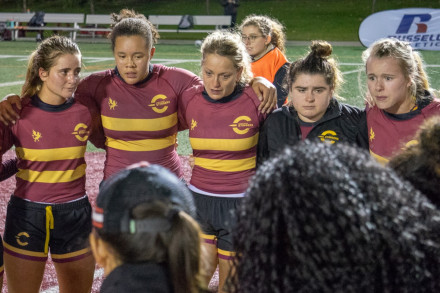 While the team was upset over their season coming to an end, coaches and players alike stressed that they were happy with their performance in Friday’s game and throughout the season. Photo Elisa Barbier

Barrieau reflects upon her first season as head coach of the program as “rollercoaster-ish.”

“We had some really high highs, some big injuries, some tough losses. We’re all over the place,” she said. “Just having one fifth-year player, it’s hard to lose her but hopefully we’ll continue to keep growing.”

This year was very much a development year for the program, which fielded nearly a dozen first-year players this season.

“We knew we might not get that far, and we did have a lot less numbers this year but the heart that everyone showed this season was amazing, and it was just a great season overall, even though we lost,” said Kyte.

Now this team sets their sights on the future as they look to blossom into a powerhouse program. As the team continues to work together and grow as a unit, they could become a force to be reckoned with in this division in coming years.

“I’m really excited to give a structure and a strategy to this group and have everybody’s level [of play] just get better, and as a group just keep growing,” she said.