Querelle of Roberval—A Novel for Those With a Strong Stomach

Kevin Lambert’s novel Querelle of Roberval is nothing short of sensational.

Set in Nitassinan (Roberval), on the traditional lands of Pekuakamiulnuatsh, the novel is told through Querelle, a character driven by perverse sexual behaviour and by a lengthy and agitated work strike.

The novel, originally published in French in 2018, received much attention from the francophone world for its fluid and poetic prose, as well as its exploration of taboo topics and portrayal of Quebec society. A new English translation by Donald Winkler came out on Aug. 2.

Querelle, the main character, is a man in his mid 20s who has recently moved to Roberval from Montreal. Upon relocating, his Grindr profile produces a haunting effect on all the men in the area, who see him as the most desirable and dangerous lover available. He also starts working at a local mill that soon experiences a strike. Throughout the novel, Querelle faces the many challenges that stem from the consequences of this strike.

The workers inevitably meet a strong opposition from their boss, Brian Ferland, who initiates violent actions they feel forced to reciprocate. The novel, therefore, never lacks action and constantly sends the reader into excited shock.

Lambert describes with apt accuracy the class divisions that develop in rural Quebec, which are distinct from those in Montreal. In Roberval, everyone goes to the same bar, and everyone heads to the Saint-Jean Lake on hot days. The primary way financial difference becomes apparent is through the material possessions of the rich.

At Christmas, for example, each one of the Ferland children get their own Xbox. Meanwhile, Jézabel, one of the workers on strike, eats junk food during the winter because “the price of fruits and vegetables starts to climb exponentially” (45).

Lambert utilizes the mill strike plotline to criticize such movements, pointing out their common flaws through the novel's characters. For instance, Brian Ferland went to business school, where he “learned that strikes can enable you to make a profit without your having to spend money on salaries,” (31) and Jézabel knows that the union will not get anywhere if they follow the rules.

But the workers have financial responsibilities, children, families; they can’t afford to go to jail, or to keep striking forever. The union leaders in Montreal are particulalrly worried about problems going on in the city; the Roberval workers are abandoned. They don’t have the tools or resources to revolt.

Meanwhile, Ferland has all the tools to suppress them, and even to eliminate them. The novel also mentions the failed unionizing attempt at the Jonquiere Walmart in 2005, which ended up closing down rather than accepting a union.

The novel does not shy away from the ugly side of Quebec society; discussing homophobia, the gender struggle for women workers, Indigenous issues, and islamophobia. However, it also highlights what makes living in Quebec unique, mentioning Rouge FM, Dollarama, Tim Hortons, tuques, steamed hotdogs and other images loaded with nostalgia.

For the most part, Donald Winkler’s translation runs smoothly. It retains style, while also adapting many sayings and manners of speech to ensure familiarity with English readers. However, he translates the word “tuque” as “toque,” (32) which, although orthographically correct, was jarring to read, and the word “facade” is spelled “façade,” (136) which is unnecessary.

Querelle is one of the most interesting, albeit disturbing, characters I have read all year. His effect on everybody he encounters uncovers facets of other characters’ personalities that would not be revealed otherwise.

His presence is almost like that of a ghost, as readers are never quite sure if he is real within the story or just an expository literary device for the novel to be told through. His sex appeal and sexual behaviour are provocative, yet they assimilate into the text smoothly, like when he talks about his sexual exploits to his straight coworkers and they get hard-ons (38). It’s startling, but just makes sense.

He comes out of every obstacle faced by the mill workers unstained, his house never gets attacked; he never gets hurt, but his downfall is inevitable. Querelle’s character is written like that of a Greek god. 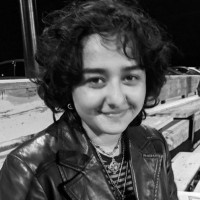