It’s not everyday that the names of Win and Will Butler from Arcade Fire are said in the same breath as that of NBA champion Brian Scalabrine, but the POP vs. Jock charity basketball game held on Saturday bridged the gap between the two professions.

Included in the star-studded roster were Justin Vernon of Bon Iver, as well as Nikolai Fraiture of The Strokes. A roster including this many Grammys, and this much musical talent, would normally have fans confused and in awe because of their skill on the court.

However, within the history of the POP vs. Jock event, a music-sports crossover event held by POP Montreal and the non-profit organization DJ Sports Club, the musically inclined players have proven to be diamonds in the rough, distributing passes, jacking up threes and going all out for a win.

At the third annual event this year, Win even charged towards an oncoming defender, sending her down on the hard court, while driving towards the hoop.

It appears you cannot spell “win” without Win Butler, who’s had basketball in his veins since his youth.

“I grew up in Houston during the Hakeem Olajuwon era,” said Butler after his “POP” squad knocked off the “Jocks” 101-92 in the charity game. “I played when I was starting the third or fourth grade.

“I always loved the game, I kind of got more into it in my mid-20s. I never really wanted to play at a higher level, but I really enjoy the competitiveness and the playing and the camaraderie that comes with sport.”

Win was joined by his brother Will, Vernon, Fraiture, Scalabrine, as well as Luke Bonner, the brother of NBA champion and “POP” head coach Matt Bonner, along with a host of semi-pro players as they went head-to-head with a “Jock” squad filled with McGill and Concordia University players. 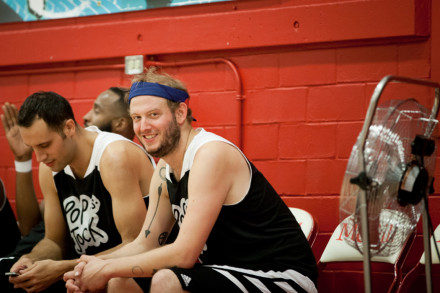 Four current and former Stingers from the men’s basketball team were on hand—forwards Mukiya Post, Michael Fosu, Xander Jean and Gabe Riche—and all contributed heavily in their team’s effort, relishing the opportunity to play against celebrity basketball players.

“I didn’t know what to fully expect [of the POP team], but when I saw them in warmup I saw that they had some legit guys. I was happy with the level of talent they had.”

The POP vs. Jock game, a staple of music festival POP Montreal since 2012, has been spearheaded by Win Butler, as well as his “Pop” teammate and former Concordia Stinger basketball player Dexter John, who is also the founder and president of DJ Sports Club, which provides communities in St. Henri, Little Burgundy and Brossard with educational, social and recreational programs.

DJ Sports Club is a host to a number of basketball leagues, and it was through basketball that John and Win got their idea for POP vs. Jock in motion.

“I met Win through a basketball league, so we kind of became friends [that way],” said John. “We tried to put together something fun, and then we started brainstorming.

“We were thinking of things to do with basketball that were relevant [with what we wanted to do], how to get the community involved, and how to get Concordia and McGill involved at the same time.”

“I just think that music and sports are far too separated sometimes,” added Justin Vernon. “It’s just good to see a bunch of musicians and athletes supporting an opportunity for little kids to have a place to play sports.”

“I just think that music and sports are far too separated sometimes. It’s just good to see a bunch of musicians and athletes supporting an opportunity for little kids to have a place to play sports.”
—Justin Vernon, frontman of Bon Iver

Since the first POP vs. Jock charity game in 2012, the event has allowed DJ Sports Club to continue funding its programs for each of its locations and to be a haven for young kids and even adults.

“DJ Sports Club is definitely an organization that I’ve been involved with since I moved to Montreal,” said Eric Thomas, a radio host from sports radio station TSN 690 and MC of this year’s event.

“I like the community involvement, I like the tight-knit family over there. Anytime I can help out, it’s awesome.”

Xander Jean participated in a DJ Sports basketball league, keeping himself in shape after his CEGEP basketball career ended, before eventually committing to Concordia University.

“I wasn’t playing [basketball] for two years after [I graduated from] Dawson,” said Jean. “[So], I was playing for DJ Sports.

“I liked the league [I was in], it’s a well organized league. I was glad we could help out today.”

While only in its third year, the event has already been a success with fans of basketball and of POP Montreal alike. The sky is the limit for how far the event can go, or whom they could bring.

“I’d love to get Kanye [West] to a game here,” said Win. “He can play too, he’s got some good handles, and you know he’ll have the best shoes on the court.”