Sitting at 11-2-2 and ranked tenth in the nation, Concordia’s men’s hockey team certainly has plenty to be happy about going into the holiday break.

Whether it’s been dominating teams or fighting through tight one goal contests the team has been collecting wins in bunches since the start of the season.

“We just found ways to win. It may not have been easy in some games but we found ways,” said Stingers captain Philippe Hudon. “It’s very reflective of the team we have and the players that compose it.”

The team has dealt with high expectations from the start of the season, said head coach Marc-Andre Element. Filled with top junior league picks and players that have spent time in National Hockey League training camps, the talent present on the Stingers roster is obvious.

Luckily for Concordia, that talent has exceeded expectations in just about every aspect of the game. The team’s goaltending, in particular, has given Stingers fans reason to celebrate. 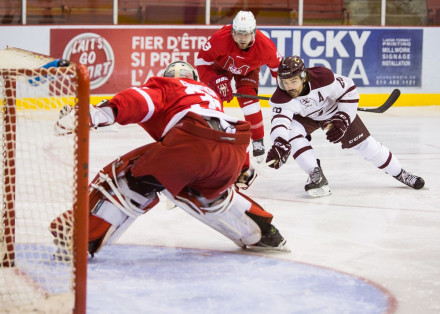 “Turcotte’s been doing a really good job. He makes our job a lot easier,” said defender Carl Neill who, along with his coaches and teammates, give starting goalie Marc-Antoine Turcotte much of the credit for the team’s successful start to the season.

Turcotte has been a wall in net for the team, currently sitting third in saves (405) and sixth in save percentage (.933) across all U Sports goalies. After the departure of Philippe Cadorette at the end of last season, Turcotte grabbed the reigns as the team’s starting netminder and has proved night in and night out that he’s more than ready for that responsibility.

Along with top-tier goaltending, the Stingers have also managed to ice a strong offensive unit all season. Sitting at four goals per game, the team’s offense has certainly been helped by having U Sports’ scoring leader leading the charge. Few teams have managed to contain Anthony Beauregard, who is leading the league with 34 points in just 15 games.

Although both Beauregard and Turcotte have had outstanding starts to the season, the team’s biggest asset and the key to their success is the depth of their roster.

“We have more guys that can contribute. We have more depth. We can spread the responsibility across the entire lineup and it shows,” explained Hudon, discussing how different this edition of the Stingers is from last year’s.

A great deal of that depth has come from the talent present in the Stingers’ rookie class. New players like Neill, and forwards Massimo Carozza and Alexis Pepin have been able to come in and have an immediate impact in their first U Sports season.

“It’s a period of adaptation, just starting to get my feet wet,” said Neill, who has anchored the team’s defense as their number one defender while putting up 20 points in 15 games. “Luckily, the team is a very positive influence on me and on all the rookies. It made our time here a lot easier than I’m sure it is for some guys in [U Sports].”

If he and other rookies are still adapting, it certainly doesn’t show. Like Neill, fellow rookie Massimo Carozza also sits at over a point per game with 19 points in 15 games and has played his way onto the top line next to Beauregard and forward Philippe Sanche.

Along with these two, Pepin has been a force this season. The 6’2 power forward has been a physical presence on the ice every night and a regular presence on stat sheets, to boot.

Older players like Hudon recognize just how much help these rookies have been, crediting them with the team’s newfound depth. Hudon was impressed at not only the impact these players had, but just how quickly they stepped up and became key players for the team despite being a new league.

Coach Element has had plenty of success with rookies during his time as head coach so perhaps this rookie production shouldn’t come as a surprise. Whether it’s this year’s players or last year’s rookies like Sanche, Gosselin and Beauregard, Element seems to have a knack for getting the most out of his new recruits.

However, he’s quick to make sure the rookies themselves get the praise for that.

“I’m not the type of coach that’s going to leave the rookie behind. If I recruit them, it’s because I want them to have an impact right away,” said Element. “I like developing young talent. But all the credit goes to those guys, they’re in school and they’re working hard school wise as well as hockey wise.”

Being given opportunities to have an impact right away is a major confidence boost for rookies, said Neill. Knowing that their coach trusts them enough to put them on the top lines or top defensive pairings puts young players in the mindset to succeed. 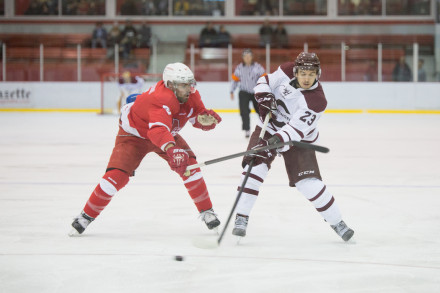 With their personal totals and the team’s record sitting where they do, Element’s decisions seem to be paying off. Despite the temptation to sit back and bask in the success though, the team understands there’s still work to be done.

“We’re not necessarily on cloud nine, but we’re pretty close,” said Hudon of his team’s recent success “We’re very happy with the record we have but we’re stressing that we can’t let it get to our heads.”

When the team’s record is brought up, players and coaches alike all say the same thing; the focus is on the second half of the season and getting to nationals. Element wants to see his team aim for nothing short of that goal.

“There’s only 14 games left, I want the second half to be like a playoff run for us,” he said.

The Stingers will play their next game against the Laurentian Voyageurs, tonight at the Ed Meaghar Arena on the Loyola Campus.