A season that seemed to be defined by the heavy blow of key departures has turned around and has Concordia’s women’s rugby team excited to be hitting the field under their new coach.

The era of Frédérique Rajotte and Alex Tessier came to an end last season. Two of Concordia’s most talented and recognized athletes left the team and now it’s time for a new beginning.

“We’re starting fresh, so [we’re] hoping to build off of that and become a better team,” said second year player Shawna Brayton.

The person leading this build and the reason for the turn from worry to excitement is new head coach Jocelyn Barrieau.

With former head coach Graeme McGravie moving into the position of associate director of Student-Athlete Services, the team turned to Barrieau, a coach with over a decade of experience and an impressive resume.

Barrieau most recently served as an assistant coach for Concordia’s men’s rugby team that had a perfect 7-0 run last season, while also working as head coach for both the men’s and women’s rugby sevens teams, a version of the sport with seven players instead of 15.

Along with that, Barrieau brought in four provincial championships between 2007 and 2011.

Add in several coaching positions with national and provincial teams and Barrieau’s record and qualifications make up an impressive collection of titles and trophies.

Her experience with teams like Quebec’s under-16 and under-18 programs in particular help with her current job. She’s already met and worked with plenty of her current players in the provincial program.

“I don’t know if I’d even be playing rugby right now if it weren’t for her. She’s an awesome coach, caring, talented, everything you can think of,” said Brayton, who’s been coached by Barrieau since grade 11, when Concordia’s new coach convinced her to join Rugby Québec.

Even with a history of success, Barrieau will have a tough time replacing the talents of Tessier and Rajotte, two names that have been synonymous with Stingers rugby for half a decade.

The two earned all-Canadian and all-star status consistently throughout their time with the Stingers and brought home league MVP and Concordia Female Athlete of the Year awards year after year.

“The school is so fortunate to have had those two unbelievable players for five years […] I’m incredibly fortunate, I feel like they’ve left me a legacy of pride,” said Barrieau.

Barrieau and her players understand the impact of the departure of their stars, but they haven’t let that dampen their enthusiasm or expectations for their team’s performance this season.

“It’s definitely a big loss, [Rajotte and Tessier] were a big part of the team. But we had a lot of rookies come in last year. They’re in their second year and they have so much potential,” said fourth year player Lia Hoyte.

“I don’t know if I’d
even be playing rugby right now if it weren’t for her. She’s an awesome coach; caring, talented, anything you can think of.” —Shawna Brayton

While she may not be playing with them anymore, Tessier will have a major role in leading the younger players as an assistant on Barrieau’s coaching staff.

In fact, she was the first hire that Barrieau made when she signed on as coach.

Tessier said she wanted to give back to the program and said she also saw the potential of the young team led by her former Dawson coach.

“Jocelyn [coming in] as the new head coach is something big for the school and the program. I didn’t think twice when she asked me […] She knows how to balance her athletes, how to push them, when to push them. She’s a great coach,” said Tessier.

As good as she is, Barrieau is faced with the challenge of a particularly young team. Barrieau said the roster will be 40 per cent rookies heading into the season.

Last season, 16 of the 35 players listed on the roster were rookies, meaning that Barrieau has a roster composed heavily of first and second year players on her hands.

While the coach admits she wasn’t expecting such a rookie-heavy roster, neither her nor her players seem deterred.

Brayton sees her new coach as the perfect person to bring up this roster thanks to her experience working with under-16, under-18, and under-20 programs. Age and levels of experience haven’t held this coach back in the past.

Barrieau said she tries her best to help rookies coming in that may be nervous to enter a highly competitive environment. 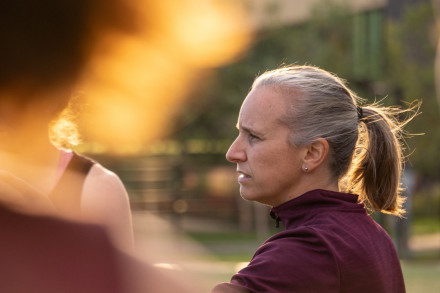 Barrieau has worked with many of her new Stingers players before. Photo Elisa Barbier.

“My three pillars are passion, pride, and love. Passion about what we do, pride in where we come from and where we’re trying to get to, and loving each other ferociously because life’s short,” said Barrieau.
It’s a method that breeds loyalty and allows players to endear to her quickly.

Rajotte has known Barrieau for four years and worked with her as a skills coach with the national program. The former Stinger said she has a good grasp of what makes Barrieau so effective.

“She’s probably the most dynamic person, not just coach, person, I’ve ever met,” said Rajotte. “She’s so into it, she’s passionate. What makes a huge difference, is seeing her coach, seeing her be so in love with rugby and so in love with what she does,that gets back to the players and it creates a dynamic of ‘she wants this as bad as we do.’”

This combination of care and dedication is what allows for Barrieau to employ what she calls her “collaborative style of coaching,” one that encourages athletes to be the driving force in their team while also creating an environment that allows them to develop in a challenging but enjoyable way.

“It’s really important for us to have our finger on the pulse of what the athletes are feeling and what they’re going through. It’s a high stress environment to perform at this level,” said Barrieau.

It’s apparent Barrieau’s new process has left an immediate impact on her players. Early in training camp, players like Brayton and Hoyte noticed an uptick in the amount of practice and organization under their new coach.

“It’s a lot more organized this year. She’s bringing in a really good vibe to the team and team culture is really good this year,” Hoyte said.

Barrieau has started a process here. For her, it’s not about instant gratification but developing something strong that can consistently grow over the next few years. She may be coaching a young team, but it’s one that Barrieau plans to bring to the very top.

“We might have a challenge in the first couple years but I’m looking forward to building something lasting and bringing a lot of pride back to the school.”