Heating Up Cold Days With Dance at Igloofest

That’s not to disparage the winter music festival, not at all. In fact, the industrial look of the pier, complete with white shipping containers stacked high, is part of the charm.

“There’s a mix of the winter side that’s a little more folkloric and the more urban vibe of electronic music that matches well with the old warehouses and the metal structures of the Old Port,” said Igloofest co-founder Nicolas Cournoyer.

The containers serve as screens and walls when the festival gets going, turning the outside pier into a wintertime dancefloor.

“After two years, we wanted to make some expansions and changes that we couldn’t do with the Parc Jean-Drapeau, and we were approached by the Old Port to hold our event there. When we moved to the Old Port, that’s really where it took off and we refined the concept,” said Cournoyer.

Julie Miron, Igloofest production director, said in more than a decade of working in event production as an independent contractor, there is one thing at Igloofest this year that she hasn’t ever seen before: the number of women in leadership roles. 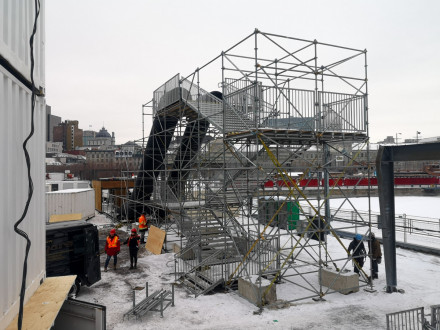 The placement of everything and every detail —including the placement of stands like this one— have to be very precise because of limited space and to maximize dance area. Photo Olivier Cadotte

For the first time at Igloofest, more than 50 per cent of the people in “decision making roles” are women.

“Those who are in charge of teams and the directors, they really have a lot of empathy, they really make sure everyone is doing alright. It makes the workers feel like they are being well taken care of,” said Mélanie Reeves, executive producer of Igloofest and the Piknic Electronik.

Feeling alright and like you’re being taken care of is crucial in a working environment that offers quite a few challenges. As one would expect, winter does offer many challenges for the production team. It starts with the temperature itself. “The cold can really slow us down while putting together the site,” said Reeves.

“We have to make sure people take breaks and work responsibly. Even if the person working next to you doesn’t need quite as many layers as you or can work slightly faster in the cold, you shouldn’t have to push yourself past where you’re comfortable or can get hurt,” she added.

The pier itself can be a challenge, too. “Because we have to assemble everything in stages because of the space, if anything is going to be late it delays the whole operation,” said Miron. “That’ll mean really long days right before the festival starts to get everything done.”

Why have the festival outside during the winter during one of the coldest parts of the year, anyway?

“There isn’t that much going on during the winter, there isn’t that much in terms of events that let people celebrate and have a party,” said Cournoyer. “Plus, our national sport is complaining about winter, so we’re going to give people a good reason to go outside by partying!”

“In a meeting once, we told ourselves that we’d do a Piknic during the middle of winter. We laughed because, you know, that doesn’t make any sense. But then after thinking about it, we decided it might actually be a good idea.”

According to Cournoyer, the cold is part of the party too. “With different conditions, there will be different experiences, and that’s what people are looking for,” said Cournoyer.

“During winter you want to be in a festive mood because the cold makes you have to move more. We wanted to push that idea even further with the snowsuits,” he said.

“In winter with snowsuits everyone kind of looks the same, so we wanted to bring a little zaniness in there with flashy coloured snowsuits and one-pieces, or with themes, with this zaniness that’s followed us since the beginning to get people into it. The reaction has been super good, so people have been liking it,” he said.

Reeves agreed that the snowsuits bring something special to the whole event.

“During the summer, it gets warm and sweaty and people kind of stick to their bubble and don’t want to touch each other. With the snowsuits, that extra layer makes the dancing much different and closer together,” said Reeves.

“It actually gets pretty warm when everyone is dancing,” said Miron. “People start taking off coats and layers. We find a lot of clothing after the show, even boots, which I’ll never understand.”

“Depending on the weather, you might even be able to see steam,” said Miron.