KnowledgeOne, Creators of eConcordia, Accused of Racism and Homophobia

A former employee has accused KnowledgeOne, the company responsible for creating and managing eConcordia, of racial and homophobic harassment, which he said occurred between August and December of 2015.

In a case supported by the Centre for Research-Action on Race Relations, a complaint over the harassment has been sent to the Quebec Human Rights Commission.

“We are asking for material, moral and punitive damages […] and a policy against discrimination in the workplace and mandatory training program for managers on equality in the workplace,” said CRARR Executive Director Fo Niemi.

Muhammad, *A pseudonym has been used to protect the identity of the subject,
said he has still not received his severance package, overtime, and Christmas pay.

Niemi said the amount cannot be disclosed at the client’s request. However, it is significant.

During the short four months of Muhammad’s employment, he said some colleagues, including CEO and president Robert Beauchemin, made insensitive comments regarding his sexuality, race and religion.

Robert Beauchemin did not respond to the request for comment for this article. The attorney at KnowledgeOne responded on his behalf. The Link reached out to KnowledgeOne multiple times for comment as this story was developing.

“KnowledgeOne vehemently denies [Muhammad’s] accusations and confirms that he was in no way subject to discrimination in his employment,” said Diana Theophilopoulos, the attorney for KnowledgeOne.

“Unfortunately, given that this case is before the Quebec Human Rights Commission, we cannot comment on the specifics regarding [Muhammad’s] employment or his departure from KnowledgeOne,” Theophilopoulos said earlier this year, when The Link first reached out to them.

“While it is not appropriate for us to share those details at this time, we can confirm that KnowledgeOne will be challenging the allegations that our thorough investigation has shown to be patently unfounded, and the relevant facts will be brought forward through the judicial process,” said Theophilopoulos.

Muhammad said colleagues would make comments on his sexuality, berating him for being gay, despite Muhammad stating he isn’t.

Muhammad said this behaviour began during his job interview with Beauchemin in August 2015.

“When they met me, the CEO was very surprised to see me,” Muhammad said.

He said he was asked if he was Muslim and had celebrated Ramadan, along with other questions regarding his race. Muhammad said he tried to divert the questions, however, he said Beauchemin pressed on.

“I have been discriminated by my race,” said Muhammad.

Muhammad said Beauchemin and other upper level employees would mock him for his improper French. This occurred despite KnowledgeOne being advertised as an Anglophone work environment upon applying to the company, continued Muhammad.

“They would correct me all the time,” he said, mentioning it was usually in a mocking tone, rather than to help him improve his French.

Due to feeling uncomfortable in what he described as a “toxic work environment,” Muhammad said he chose to work at night instead of during the day, as the company had flexible hours, to avoid colleagues like Beauchemin.

“The environment was getting so toxic,” he said.

Muhammad said he told then-human resources manager Cynthia Sarette about the situation. However, Muhammad said she told him to quit complaining and to keep in mind that they can hire him, but also fire him.

Cynthia Sarette did not respond to the request for comment before the deadline of this article.

Muhammad said he was hired in August 2015. He said he was promised a printer, computer, office and parking space. He said he was not granted these things during his employment. Instead, he said that he was assigned to a cubicle and told he would eventually be given an office.

He said his job involved searching for fraud, plagiarism and analyzing data, where he would have confidential information of Concordia students, including their name and student ID’s. Muhammad said he needed a protected computer and office to maintain the security of this information. 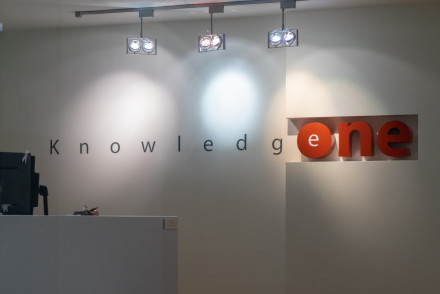 Diana Theophilopoulos the attorney for KnowledgeOne said they cannot comment on Muhammad’s employment or departure, but deny these allegations. Photo Elisa Barbier

Muhammed had three supervisors during his time at KnowledgeOne. He said his third supervisor, De St-Hilaire, was hired a month after he was. He said she received a parking space, office, printer and computer soon after her employment, while Muhammed did not.

“They just neglected me all together,” he said, referring to his treatment and failure of the company to provide what his job required.

In December 2015, Muhammad said he was fired without warning or notice. Instead, he said he was told of the termination of his employment via a Concordia professor that Muhammad had been a teaching assistant for and had initially encouraged Muhammad to apply to KnowledgeOne.

They had maintained a friendship. During the winter holidays in 2015, Muhammad said he and the professor met for lunch, where the professor apologized for hearing that Muhammad had been let go.

Unknown to Muhammad, he was shocked and contacted KnowledgeOne for confirmation.

Muhammad said he couldn’t receive a response since the office was closed for holidays.

By mid January, he said he still had not receive a response for weeks until an official letter of termination of employment was sent to him. It stated he was fired for entering an office where he did not have prior authorization and for going to a Concordia exam without permission.

The Link has received and reviewed a copy of the letter from CRARR.

Muhammad said Sarette had accused him of trespassing in her office during a Christmas party. He said he went to retrieve plates for colleagues to eat dessert at the party. Afterwards, he said Sarette approached Muhammad and told him he had trespassed in her office because her door was open when it was not before.

At the time, Muhammad said Sarette told him she would talk to Beauchemin about having him fired.

Following the incident, Muhammad said he emailed Beauchemin explaining the situation and stated he would like to meet them both to discuss and resolve the issue.

Despite this, Muhammad said a meeting was not held to address Sarette’s accusations and KnowledgeOne did not provide any proof he had trespassed her office.

The second reasoning for termination involved the allegation Muhammad had gone into an exam without permission.

One of Muhammad’s tasks involved reviewing eConcordia classes for plagiarism. If he had suspicion of plagiarism, then he would then make a case against a student to present to the university.

Muhammad said he had an issue with the system, where it would not allow him to see whether a student had dropped the class or not, so he went to the exam room to see if the student he was making a case against had in fact dropped the class.

However, Muhammad said he had not asked for authorization to be at the exam because he didn’t know he needed permission.

As authorized by the supervisor of the exam, Muhammad said he contacted university registrar, who at the time was Bradley Tucker. He said Tucker met with him and his supervisor De St-Hilaire, and he said Tucker told Muhammad it was not a big deal, however, to notify him in the future.

Bradley Tucker did not respond to the request for comment before the deadline of this article.

Muhammad said that KnowledgeOne had not announced any further issues or concerns regarding him and this incident following his meeting with Tucker and De St-Hilaire.

After Muhammad’s departure from KnowledgeOne, he said he met with an employee who had been fired by KnowledgeOne as well, and wanted to meet on Concordia campus to talk.

Muhammad said the former colleague, whose identity remains anonymous, shared he had faced similar treatment of racial discrimination before being fired. He also shared with Muhammad that other people of Middle Eastern background had been fired.

While The Link was not able to obtain a interview with his former colleague, Muhammad shared a recording of a phone conversation between Muhammad and the employee, which was taken with the former colleagues’ consent, where they detailed their experiences of racism while at KnowledgeOne.

Both Muhammad and Niemi corroborated that following this employee’s departure from KnowledgeOne, they have health complications they are still dealing with.

Muhammad said this employee told him after KnowledgeOne fired Muhammad, other employees would make racist comments about him.

He said the former colleague also told him that some colleagues at KnowledgeOne would make similar racist comments to his face, including calling him pig, joking that he does not eat pork due to religious reasons.

Niemi said he spoke to this former employee and said he has undergone therapy as a result of the work environment at KnowledgeOne. Niemi said Muhammad is in contact with not only this employee, but another employee who has also had to seek therapy as well.

Five names of former KnowledgeOne employees were provided to The Link by CRARR and Muhammad. Muhammad said all five of these employees that were of Middle Eastern descent had either been fired or left following Muhammad’s termination of employment.

The Link _ did not receive a response by the five employees that were said to have faced racial discrimination from eConcordia and had either left or been fired as a result. The Link _was provided a recording of the conversation between Muhammad and the former employee that has fell ill.

Following a run-in with a former employee on Ste-Catherine St., Muhammad said this employee told him they were advised not talk to him.

Since Muhammad’s departure from KnowledgeOne, he’s had trouble seeking a job and healing from his experiences at the company, despite holding a bachelors in accounting.

To further employment difficulty, he said he has removed his LinkedIn, social media and other forms of online presence after he noticed lawyers from KnowledgeOne were looking at his LinkedIn page.