When I watch a film, I usually don’t know how to feel once it ends and the credits roll. Did I like it? If I enjoyed it in the moment, does it stay with me? Can I recall anything other than if it was okay?

This isn’t the case with every film, of course, but I’d say in the past few years I’ve had ambivalent feelings towards most of what I’ve watched. Not We’re Still Together, though.

Right off the bat, We’re Still Together grabs you with a striking image. An image that’s stuck with me, and sets the tone of the film right away.

The film’s protagonist, Chris—played by Jesse Camacho—is a loser. When we’re first introduced to him, he’s being physically assaulted, bullied. He’s held down by his aggressor, and has his mouth spat in.

It’s a tight close-up shot on his face over the bully’s shoulder, and the scene isn’t cut in any way, so we’re literally right in Chris’ face when this happens, upping the discomfort.

“I knew I needed an arresting image at the beginning of this film to get a reaction from the audience,” said Jesse Noah Klein, the film’s writer and director.

The film was also written by Klein, and stars Brielle Robillard, Eve Harlow, Jesse Camacho, and Joey Klein. The film was shot entirely on-site in the city.

We’re Still Together uses a lot of close and medium shots, like in the opening scene. That choice forces the audience to be right up close with these characters during their uncomfortable and unpleasant interactions so that we really get a sense of how vulnerable and afraid they truly feel.

In that first scene, Bobby, played by Joey Klein, rescues Chris, and the two spend the rest of the film together, bouncing around Montreal as day turns to night back then back to day.

“What can happen in one night?” asks Klein.

The film centres around the subject of men’s inability to communicate and be emotionally vulnerable, as explained by Klein.

In this way, Bobby and Chris are similar. They’re both trying to escape the dreariness of their lives, but they just have different ways of dealing with this.

Shortly after meeting, the two go to a few bars, a house party where they meet Claire—a girl that works at a depanneur that Chris frequents and whom he likes—who’s chilling with her friends.

In film theory, there’s a trope known as the “manic pixie dream girl”. It’s where the male main character’s female love interest only exists in the narrative to uplift the male protagonist’s life and give him new meaning and purpose. 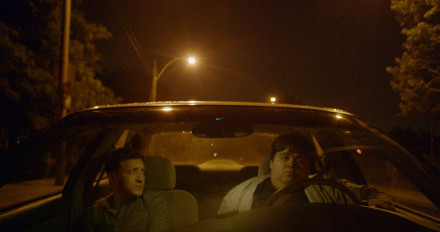 (left to right) Bobby (Klein) and Chris (Camacho) driving around Montreal. Screenshot from We’re Still Together

We’re Still Together subverts this trope in that Claire isn’t there to fix him and his problems. She isn’t inexplicably drawn to him nor does she dote on him, as if she has no thoughts, feelings or goals of her own.

“We don’t know what she feels towards him,” explained Klein. We don’t know much of this young woman by the film’s conclusion, but we do know she’s not the one who’s going to bring about change in Chris.

What does bring about change is the introduction of Bobby into Chris’ life.

Bobby pushes Chris to be more assertive and dominant. However, his unhinged approach to relationships doesn’t gel with what I—as well as other characters in the film—would consider appropriate.

This is abundantly clear with Bobby. The more time we spend with him on screen, the more we see his descent into madness. We see he has warped views and is impulsive on how he tries to connect with his daughter and ex-wife.

Chris, on the other hand, is a pushover. He’s the film’s central character, but his personality is passive throughout its entirety. He gets pulled into Bobby’s story so we only get comparatively less of his wants and needs.

Bobby is impulsive and acts out while Chris is withdrawn. The ineffectiveness in their relationships with other is also seen through the aesthetics of the film. It takes place primarily at night, a time when the city can be a dark, lonely place.

The lighting of the film reflects the awkward and, at times, uncomfortable nature of our characters. The visual tone of the film is a consistent bluish-grey, which renders colours muted and a lot of the scenes to have dim lighting. Even in interior scenes the lighting remains relatively low.

There is a bit of irony in this when you consider Montreal’s nightlife is known to be bustling with its many bars, nightclubs, restaurants, and festivals.

Ultimately I’m not sure Bobby is much better for Chris than the bullies at the beginning of the film. There are a few instances over the course of the film where Chris is uncomfortable with Bobby’s behaviour, but Bobby forces Chris to stay with him. Perhaps he’s pushing Chris out of his comfort zone in order to make him a better or stronger person? But I don’t think so.

The film does leave us with a sense of yearning to know what happens to these characters after the credits begin to roll. Neither Bobby nor Chris end up where they want to be, but there is hope with the start of a new day with new possibilities.

We’re Still Together is a slow burner. There are no major action set pieces, there are no fancy costumes. There’s no razzle dazzle, if you will.

What we’re left with is an earnest look into the lives of two misfits trying to connect with others. The earnest nature of the film is what’s compelling because even though the characters are awkward you want them to succeed.