Special Olympics Athlete Reminisces on Career Ahead of International Competition

Skating gracefully on the thick frozen surface, he proceeds to perform his routine—executing meticulous yet delicate maneuvers.

After receiving an array of directions from his coach Louise Gagne during practice, the 25-year-old makes his way to the bench to rest. His mother, Lama Shakar is waiting—her arms stretched out for her son. Baz, gliding on the ice, embraces her.

Baz, who was diagnosed with autism at the age of seven, is a Special Olympics figure skater who has been lacing up the skates since he was six years old. For Baz, having trouble concentrating was challenging, but the sport provided a positive outlet to put his focus on.

“I enjoy [figure skating a lot],” said Baz. “The sport makes me happy.”

“[Coaching Baz] always went well,” said Gagne. “He was always nice. I know his mother had some trouble back at home, but I never had this on the ice.”

In order to adapt, Gagne took the decision to take classes to work with Special Olympic athletes. Nineteen years on, the two meet up four to five times a week for training. “[Gagne] is like our family,” said Shakar.

Over the years Gagne has witnessed firsthand Baz’s improvements in the sport. When the two first met, Gagne said Baz would follow her around in the schools at which she taught. She also admitted that two have developed a good connection.

“He is often incorporated with my regular skaters and he’s as good as them. He works really, really hard,” said Gagne “I’m the second mother—I like him like he was my son.”

Baz has been competitively active in the sport for almost two decades, and he’s seen his fair share of success. 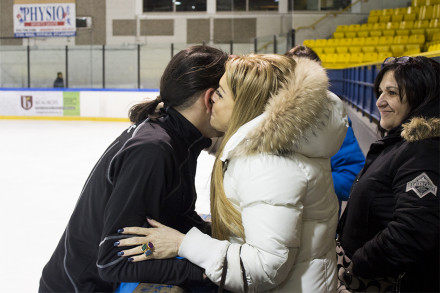 Baz embraces his mother on the bench during practice on Wednesday, Nov. 23. Photos Alexander Perez

In March 2016, Baz was a part of the Team Quebec delegation, made up of 51 athletes, to compete at the Olympics Canada Winter Games, in Corner Brook, N.L.

“For him to arrive here and to be able to [compete], said Shakar, “we were so happy.”

The competition was held between March 1 and March 5; Team Quebec returned from Corner Brook hauling 60 medals. In Emile’s respective sport, he was the only skater to win gold in singles figure skating.

“Oh my god, I was so happy. Really I can’t describe, I was screaming, jumping, hugging him,” said Shakar. “We were so stressed and afraid, but [Emile] was feeling like he was going to win.”

Baz’s recent achievement isn’t the only honour he’s received. Baz has quite the repertoire, winning gold at the Jeux du Québec in Sainte-Thérèse 2009, at the Canada Games in Halifax, N.S. in 2011 and in the Lévis Jeux d’Hiver 2015.

Halifax in particular was a memory Baz and his mother won’t soon forget. In a moment of pure nostalgia, Shakar remembered the medal ceremony: the red carpet, the podium, and the tears of joy that ran down her cheeks.

“When they announced Quebec, and his name, I was crying. It was so nice,” said Shakar.

Baz’s success in Hamilton didn’t come easy, however. The first half of the competition was difficult due to the changes that were made on the ice. During competition, the ice traditionally has markers painted on for the skaters. This wasn’t the case in Halifax

“So we got to the Canada Games and [we had to] make the elements without lines and we were completely lost,” said Gagne. “The practice ice had lines but not the competition ice.”

Without the lines Baz finished last, but when he performed the second half of his program, he beat out the competition on points to win gold in the singles category.

Baz’s dedication to the sport knows no boundaries. He is always looking forward to getting on the ice. Whether it’s to practice or to compete, he can’t contain his excitement to skate and express himself through the sport he loves.

Recalling her fondest memory of Baz, Gagne simply admitted that seeing him on the ice, joyful and smiling, is the one that stands out the most.

Baz will now hone his skills on the national stage. From March 14 to March 25, Baz will don the red and white for Team Canada at the 2017 Special Olympics World Winter Games, to be held in Austria.

“I feel great!” said Baz. “Because it makes me so proud to [represent] Canada.”

Baz has yet to win anything other than gold in competitions. Hungry for more success, he’s looking to keep his streak alive in Austria.

“Every time he competes, he gets a medal, so for him he keeps wanting more and more,” said Gagne.

With the games around the corner, both Baz and Gagne will look to make some adjustments in his routine on the ice.

“When we get to the World Games, we need to changes things,” said Gagne “Sometimes it gets a bit crazy. It takes time to change things but with Emile I don’t have difficulties.”