Dr. Myrna Lashley Is Resilient in the Face of Hate

A Story of Activism: Reflections on Her Journey

“This sounds so cliché, but I really want us to realize that we are part of humanity and we are all on this journey together,” said Dr. Myrna Lashley.

Lashley, who holds a doctorate in counselling psychology from McGill University and who is an assistant professor in the Department of Psychiatry at McGill, was this year’s English spokesperson during Black History Month in Montreal.

Lashley was chosen from the candidates who stood out in Montreal’s Black community because of the work she’s done to help and educate people in the city. “Her candidacy stood out of all of the applications thanks to her work on the racial profiling issue and in her leadership in her community,” said Claire-Anse Saint-Éloi, the assistant coordinator for the Round Table of Black History Month.

Lashley’s work on racial profiling with the Montreal police as a member of their expert committee, on how to train their officers and to resolve the issue, as well as her work on city’s committee for its public consultation into systemic racism and discrimination are what set her apart from other candidates.

This year’s Black History theme was “our history is written every day,” and according to Saint-Éloi, Lashley was “the ideal choice. “She creates history thanks to her implication, and advances the condition of Black people in Quebec,” she said.

Lashley’s face, wrinkled by time, bears witness to all the hardships she had to go through as a Black woman in North America. Furrows alter her features; they are small but bear the weight of relentlessness.

“The perfect day for me is when I feel that the interaction that I have with somebody is like we are touching each other emotionally, philosophically, and spiritually; that there is a connection,” she said. Interacting with people is the most beautiful gift that a human being can give her, because exchanging at this level makes the world a better place for everybody. This is what she has been striving for. Yet despite all of her success and prestige, she still must deal with the daily struggles of being a Black person in North America.

“Back in the ’70s in the States […] I was told to get off a beach, because the beach was [only] for white people. I’ve never dealt with this before,” said Lashley, who grew up in Barbados.
She explained that she experienced similar discriminatory treatment in Canada, as people have said racist comments just as she had experienced in the United States. Her response to those comments were, “I’ve put my life on the line for you, [and] for this country.” Here she refers to her service in the Royal Canadian Navy.

Lashley said that systemic discrimination is “built in the system,” and based on white norms and privileges. White people do not see the struggles that a Black person or any POC must to go through.
“It was [just] a few years ago that as a Black person, if you went to buy lipstick, you could not get one that would suit our colour because they were all made for whites; and then they would charge us extra when they had it cause they would tell us it was a specialty product,” said Lashley.

Injustices like these are what made her fight for her community. “But I could have allowed it to define me as a bitter, angry person or I could look at it and say, ‘If we don’t get together on this we are all going to die,’” she said.

“If you want peace, if you want love, you have to demonstrate it.”- _Dr.Myrna Lashley _

Her hardships made her stronger; she does not dwell on the past. The professor wants to go forward step by step to build a more loving and united world. “I also believe that the only way to fight evil is with love. You cannot fight anger with anger, it will just escalate it,” said Lashley. 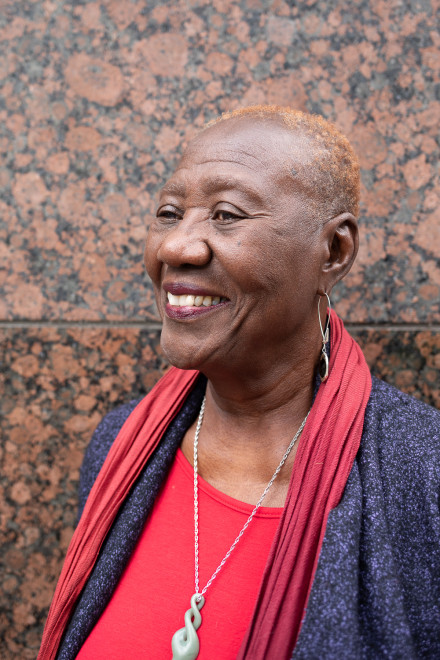 Lashley is the current Honorary Consul of her home country, Barbados, to Montreal. Photo Maggie McCutcheon

Elisabeth Faure, a close family friend of Lashley for more than ten years, underlines how much Lashley has done for the Black community overall. “Their generation [her mother and Lashley’s generation] lived a lot of firsts and lived a lot of being the only one,” said Faure. Lashley is an inspiration at a personal level in her life, she continued. Faure does not leisure on the words to describe the McGill professor: inspirational, pioneer, fearless.

Since she was young, Lashley tried to open doors for Black people to have a better life. Imagine, early 22-year-old Lashley in Nova Scotia working in the Navy, serving her country, putting her life on the line for Canadians. When she wanted to live off the military base with a friend, she faced a wall: landowners would not let her rent their place because of her skin colour. “I go to church on Sundays, they’ve got you people [Black people] in the church. I don’t like sitting next to you, but I am not gonna have you living in my house,” said the landowner.
So, Lashley said she took the matter into her own hands and made a complaint.

“I did it for whoever would come after me,” she said. Lashley said that she took the Nova Scotian law—that could allow landowners with less than ten apartment units in a building to discriminate—to court and won her trial against the government.

Born in Barbados, Lashley spent all her childhood there. She holds many family memories from the country; this little girl from a small island was convinced she would be a blacksmith, as her grandfather was. At the age of 12, she moved to Montreal to live with her father. From this moment on, her life completely changed; and one of those changes was to experience racist attitudes, which she had never experienced before. She said her mother, who died a few years ago, made her stronger in every challenge that she had to face. “No matter what is [thrown] in your way, you can find a way over it, under it, through it, around it, but you don’t have to let it stop you,” Lashley’s mother had said to her.

Lashley is a fighter; she always uses her voice to bring light to injustices. However, she never dwells on the past, as she has learned from it. Going forward head first is what she preaches: “I will walk towards things, but I never want to go back,” said Lashley.

What stood out the most in her interview is that she does not talk about herself, she prefers to give lessons about life and how we should interact. According to her, we are human beings first and our colours do not matter. What she portrays goes beyond the person itself. “If you want peace, if you want love, you have to demonstrate it,” she said.

Sharing, exchanging and connecting are crucial lessons that Lashley wants to communicate to the younger generations. “She is a role model to so many people, more than even a role model, for me she is almost like a second mom figure,” said Faure.