Despite being down four out of five starters, Concordia Men’s Basketball team managed to pull off some late game heroics courtesy of sophomore Guard Anthony Sanogo, who knocked down a buzzer beating three to win the game.

With Regina (2-1) defeating Acadia (1-2) in the earlier game, the Stingers had new life and another chance at the championship title since they held the tiebreaker against Regina, having beaten them in their first game of the tournament.

However it took the Stingers three entire quarters to get into the game, as the Waterloo Warriors dominated until the mid way mark of the fourth—where a prayer was answered.

Trailing by a point with less five seconds left in the game, Concordia had the ball on their opponents side of the court. It was almost designed to perfection out of the timeout.

With backup guard Cedrick Coriol inbounding the ball, the gym was silenced by the intensity of the moment. The score was 72-71 for the away team.

Head coach Rastko Popovic ran off sharp shooter and MVP of the tournament Adrien Armstrong deep into the corner, freeing up hero Anthony Sanogo who curled off a screen straight to the top of the three point line. Sanogo, with no hesitation, drained the long distance jumper giving his side a 74-72 victory in what seemed difficult to imagine at the beginning of the game.

Sanogo explained moments like this are what athletes live for. He was in position to make a play and he did just that.

“It was either we win or go home,” said Sanogo. “I didn’t doubt it, I got my feet set and just took the shot with confidence. It’s a mental game, it’s all about confidence.”

Sanogo was of one four Stingers in double figures as he finished the game with five rebounds and 11 points but none bigger than his last three.

Concordia’s key Freshman Samuel Lessard set the tone the game as he scored three straight times down the floor. The performance as a whole led to Popovic praising his team’s relentless effort and work ethic after the game.

“I thought the guys really deserved this win, it wasn’t pretty early on but our guys competed and executed down the stretch,” he said. “We could’ve just rolled over and said ok we’re down four starters, that’s 45 points we don’t have today but we showed character and toughness and I’m proud of that.”

Fifth year player Garry Merisier made the miracle possible as he drilled a clutch three pointer with under a minute left in the game, tying the game at 71. Popovic described the veterans play as solid, exceptional and impressive. He thought Merisier shined over the weekend despite his limited playing time last season.

“We could’ve just rolled over and said ok we’re down four starters, that’s 45 points we don’t have today but we showed character and toughness and I’m proud of that.” — Rastko Popovic

The action packed fourth quarter kept the crowd cheering, Stingers bench applauding, and saw a Warrior’s side eventually crumble under pressure. Nedim Hodzic, who channeled heroics of his own, carried the scoring load for the away team as he dropped 30 points and accumulated 11 rebounds in the losing effort.

In terms of the injury bug that the Concordia team is currently facing, Popovic refuses to let it be a situation to dwell upon. With his strong “next man up” coaching strategy, he expects his players to be ready to play at any given moment, which they clearly understood over the weekend.

“You can’t control injuries, it’s sports,” said Popovic. “We still had a chance to win all three games with the roster we had, so there’s no excuses. I’m proud of how we played because we didn’t give up. I like the competitiveness this creates because it doesn’t matter if you’re a fourth or fifth year guy, its next man up mentality.” 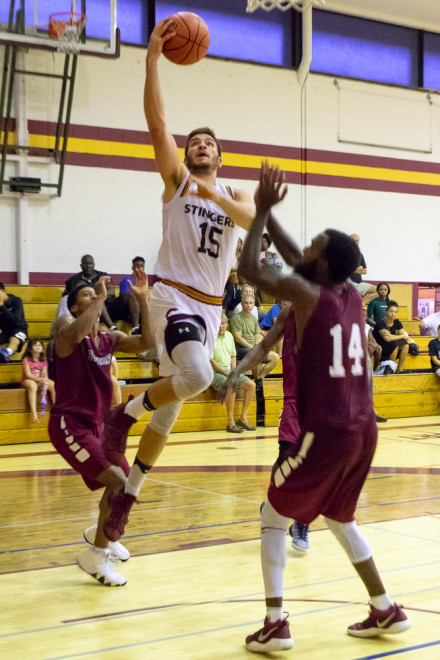 The Stingers were missing several starting players due to injury. Phot Elisa Barbier.

Despite Concordia’s comeback happening relatively late in the game, the energy on the bench remained constant and like Anthony Sanogo, MVP Adrian Armstrong knows all to well the absorbing effect this has on players.

“Even though we were missing some of the guys who usually play, they weren’t missing they were on the bench being loud, being vocal,” he said. “They were helping us win. Going forward we need to have that same intensity as a team, keep gelling and keep meshing.”

Armstrong had a game high four three point shots and finished the game with 17 points in total.

The tournament win places Concordia in good shape heading in to the new season. The rookies are proving their place, competition is high and it is unlikely to see any change in the near future.

The Stinger will host Laval on Nov. 8 for their season opener. The Rouge et Or will look to avenge their playoff loss to the Stingers in what should be an entertaining kick off to the season.