Though his production didn’t come right away, Concordia Stingers men’s hockey forward Anthony Beauregard was a difference maker from the first drop of the puck.

As the Stingers welcomed the Brock Badgers Friday night, the team looked to bounce back from their shootout road loss against the Ottawa Gee Gees in Ottawa and come away with a 5-3 win in their first home game of the season.

Despite a scoreless first period, the game began with back and forth chances for both teams as they traded scoring opportunities.

While the Stingers came away with quality chances, it was Brock that held the advantage when it came to quantity as Concordia spent more time than they would have liked in their own zone in the opening frame. Luckily for them, starting goaltender Marc-Antoine Turcotte came prepared. 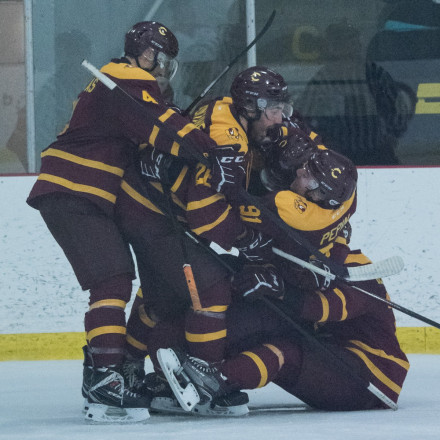 “He played well. He kept us in the game. He made some amazing saves,” said head coach Marc Andre Element, who saw his goaltender stop 31 of 34 shots.

Turcotte’s saves on what appeared to be several sure goals in the first period filled the Ed Meagher arena with audible gasps and cheers as the Stingers faithful showed their appreciation.

As the first period continued, the team’s started to show off some of the more aggressive, chippy play that characterized the later parts of the game. In the last minute of the period, the referees were busy, calling three minor penalties which resulted in Concordia starting the second period with a four against three powerplay.

“When you start with a powerplay at the beginning of the period, It’s important to do something. You can make a good play or score a goal but you need to get some momentum,” said Anthony Beauregard who made sure the team did just that.

Just a minute into the second, Beauregard buried his first goal of the season with some help from captain Philippe Hudon and rookie Carl Neill.

Less than a minute later, Scott Oke took advantage of the long powerplay and put the Stingers up by two with a goal assisted once again by Carl Neill and Philippe Hudon. However, the lead was short lived as just a few minutes later, Brock fired in two quick goals 20 seconds apart to tie the game.

Less than a minute later it’s 2-0 as Scott Oke buries a chance in front of the net. Neill and Hudon grab the assists #Usports #homeopener

Despite a few plays immediately after this stuck in their own zone, the Stingers responded with a show of strength, pouring the pressure onto Brock in their end. According to Beauregard, the team’s veterans quickly refocused the team after the tying goal.

“We have a lot of leaders in the locker room like Hudon and Beauchemin,” said Beauregard whose five points are tied for the team lead. “They’re like grandfathers to us. If we get too pumped up, they just talk and calm us down.” 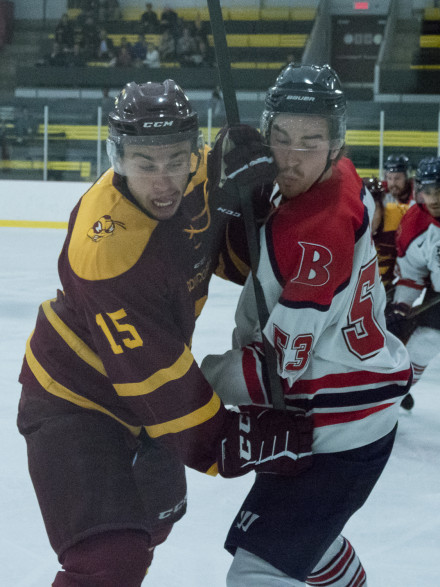 Beauregard certainly looked calm and collected as perhaps the most impactful player in the second period. Whether he was carrying the puck in and leading a rush or sliding quick passes across the ice, the 5’6 forward was hard to miss. His coach certainly didn’t fail to notice his work.

Beauregard and the team’s work after the tying goals payed off with less than ten seconds to go, as Raphael Lafontaine scored a late goal to give his team the lead. Assists went to Dominic Beauchemin and rookie Alexis Pepin who is currently outscoring all teammates besides Beauregard.

The Badgers came out swinging in the third, sneaking a goal past Turcotte early to tie the game. From that point on, the two teams seemed to be at eachother’s throats. Of the game’s 23 penalties, 15 came in the third period, including one game misconduct and a major for Brock’s Skylar Pacheco. Both teams spent plenty of the period with players in the box.

“We got out of hand in terms of controlling our emotions and it kind of translated in terms of penalties and how we had to kill those […] We’ve got to work on [that],” said Philippe Hudon. “We’ve got to stay cool and calm and collected.”

The captain described the feeling of his first home game with the C as “nothing short of great.”

The Stingers’ penalty kill came up big, keeping Brock off the board as Beauregard scored the game winning goal on a wraparound thanks to an excellent net front presence. The hero of the game capped off a strong performance by completing the hat trick with a shorthanded, empty-net goal.

Despite Beauregard’s capable play, Concordia’s biggest strength was that every line was threatening throughout the night. Perhaps the team’s decision to replace lost skill with talented depth was the right one. Early in the season, that certainly looks to be the case.

The Stingers are back in action Saturday night, hosting the Guelph Gryphons. They’ll be looking to get a winning streak going against a Guelph team that has dropped two straight games.