Ottawa 7, Concordia 2: Stingers Struggle to Keep Up With Gee-Gees

The Stingers fell 7-2 to the Ottawa Gee-Gees in game two of the Ontario University Athletics East Division Final at Ed Meagher Arena on Saturday night.

Forward Anthony Beauchamp buried a chance in front of the net to open the scoring for the Stingers before Ottawa replied with two quick goals. Forward Tyler Hylland tied the game with a short-handed goal before the first intermission.

“We wanted to come out hard and with intensity,” said team captain Philippe Sanche. “We had a good start, let in two quick ones but bounced back and kept it tight.”

The breakthrough came two minutes into the second period when Ottawa forward Kevin Domingue scored to bring the score to 3-2. The goal came on one of six power plays for the Gee-Gees, as the Stingers struggled to stay out of the penalty box all game. 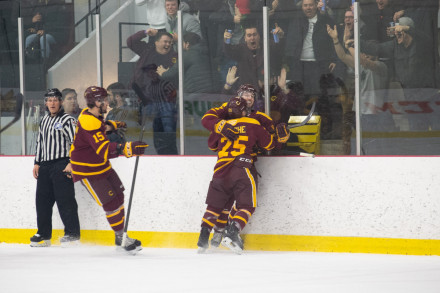 Stingers celebrate a goal, sending the crowd into a frenzy. Photo Caroline Marsh

“They were playing in our face all night and emotion ended up taking over some of our guys,” said head coach Marc-André Élement. “We took too many penalties tonight, so we’re going to have to learn to focus a bit more.”

Ottawa’s relentless forecheck and speed in transition led to many Concordia turnovers, creating goal-scoring chances and often pinning the Stingers in their own zone.

“We have to give them credit, they had a heck of a forecheck and good systems,” defenceman Carl Neill said. “We had to adapt to it on the fly and try to get some more support in our own end, but it obviously didn’t work for us in the end.”

Speedy forward Yvan Mongo led the way for the Gee-Gees, zooming past several Stingers defenders before deking goalie Kyle Jessiman for his first of two goals on the night.

“This loss definitely stings, but luckily we have another chance now. We’ve shown so far that we can upset some teams and we want to make it to nationals, so we have a good shot.” Tyler Hylland

“We knew how much speed they had up front, so we knew what to expect coming in,” Neill said. “We like to play an aggressive style on defence, so they got a couple of bounces and got behind us a few times.”

Ottawa went on to score five unanswered goals, including an empty-netter, to seal the win and the series sweep.

Despite the tough loss, the Stingers’ attitude was generally positive after the game.

“We’re proud of ourselves because we know we weren’t expected to make it this far,” said Neill. “We had this kind of thing happen to us two years ago against McGill, but we bounced back and learned from it.” 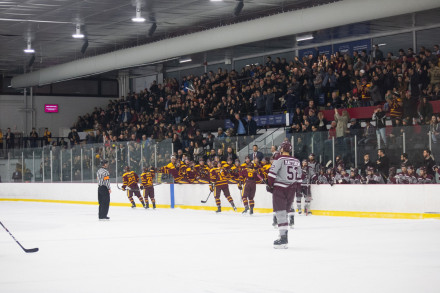 Stingers fans packed the arena to cheer on their team in the elimination game. Photo Caroline Marsh

In 2018, the Stingers lost the OUA East Final to McGill, before beating York in the bronze medal game and advancing to nationals. Jean-Philippe Beaulieu, Alexandre Gosselin, and Carl Neill were on the 2018 squad.

“I just told the guys to keep their head up, to stay positive,” Élement said. “A couple of the guys on our team have been in this position before, so I know they’ll be able to put this behind them and focus on what’s next.”

Concordia will face the loser of the OUA West Final between the Western University Mustangs and the University of Guelph Gryphons. If the Stingers win, they’ll qualify as a wildcard for the 2020 U Sports University Cup, held in Halifax later this month.

“This loss definitely stings, but luckily we have another chance now,” Hylland said. “We’ve shown so far that we can upset some teams and we want to make it to nationals, so we have a good shot.”