After a rough 2-1 loss to McGill the night before, the Stingers came into the second game of the back-to-back with what appeared to be a much more energized approach.

Instead of the flat first period effort they had at McConnell arena the night before, the Stingers came out flying, trading chances up and down the ice with the fifth-ranked McGill team.

“It was a high pace,” said Concordia head coach Marc-Andre Element. “It’s going to be like that when two of the top teams are playing each other.”

Concordia’s smart puck movement and powerful rushes up the ice transformed into a juicy rebound that Charles-Eric Legare buried to put the home team up 1-0 in the dying minutes of the first frame.

As the game went on, the two rivals made sure to let each other know just how little love there was between them. It seemed as if every second puck freeze was followed by a scrum. The first period alone saw seven penalties between the two teams.

“Both the games depict what this rivalry is really about,”said Stingers captain Phil Hudon, who assisted on the game’s opening marker. “When both games are one goal games, it really speaks to how much we dislike them and want to beat them.”

The second period maintained the fervor and excitement of the first 20 minutes. It was only a matter of time until McGill would tie the game. That goal finally came midway through the period, courtesy of McGill forward Alexandre Sills.

By the end of the second frame, Concordia was being outshot 23-16.

The lopsided shot totals weren’t a worry for the Stingers. As they pointed out after the game, they sacrificed quantity for quality when it came to shooting.

Despite their improved play, the Stingers fell behind with less than ten minutes to play. A shot by Guillaume Gauthier bounced off the post and managed to squeeze by Concordia goalie Marc-Antoine Turcotte. Down 2-1 with little time left, the Stingers faced a top notch defense that was determined to hold them off the board as they had just 24 hours prior.

“It was a great test of character early in the season that we can build on,” said Hudon.

Finally, they beat that defense to tie the game late. Forward Philippe Sanche managed to redirect a shot from Philippe Charbonneau to draw the game even with less than two minutes left in regulation.

Thanks to Sanche’s last minute goal, the fans were treated to some free hockey. Fortunately for them, it would be three-on-three overtime hockey, where a single mistake or stroke of luck can decide the game.

“It’s kind of the 50/50, whoever gets the lucky bounce here or there scores,” said Stingers defender Carl Neill. 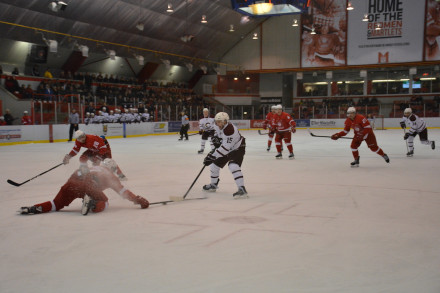 The Stingers had chances in overtime, but ultimately could not cash them in. Photo Amely Coulombe

McGill’s Michael Cramarossa managed to pick up one such bounce to end up in a neck and neck race towards Concordia’s net with 20 seconds left in the overtime session. He would end up crashing the net and scoring the game winner in front of Sanche who, like several Stingers players, saw the goal as a potentially controversial one.

“I don’t even know if it was really in,” said Sanche. “From my side it looked like he kicked it in but it’s a goal. It’s a long season, we’ll get those points back and fix some small mistakes.”

Despite the loss, the Stingers took this game as a confidence builder. They matched up with a top five team in the nation and improved leaps and bounds from just the night before.

“The players learned that we can compete with the best,” said Element. “Right now our battles with them are 2-1 for them so we need to get the next one and make it 2-2.”

The Stingers will take a trip to Sudbury to face the Laurentian Voyageurs on Friday.