Show Addresses Borders, Between Life and Death, and the Public and Private

With most plays, viewers sit passively while actors lead the show. But at the Loyola campus, Concordia theatre students have been putting on an immersive show where the audience is encouraged to join in on the plot themselves.

One play invites audience members to sit down for a meal, while another invites guests to sit on the floor. One might ask that you hold hands with the actors, and some change plot lines according to how the audience chooses to interact with the performers.

The performances are part of the Creation Playground course offered by Concordia’s theatre department. The show began its run on Tuesday and is going on until Sunday at the FC Smith chapel. Professor Diane Roberts describes the production as an environment that allows viewers to explore the “borders of their own comfort level.”

There are seven shows in total, and each one hones in on the theme of borders. One play addresses political borders, while others look at the border between life and death, and between private and public rumination.

It’s impossible to see all seven shows in one night, and because of the shows interactive nature each performance is unique in its own way. Assistant director Mayala-Kali Elter says the format is intentional, and makes viewers want to come back for more.

Can You Pass the Guilt Please?

Can You Pass the Guilt Please gives a snapshot of each family members’ thoughts during a Christmas dinner.

The audience watchs the scene through an ornamental painting frame, and immediately upon entering I noticed two men from the audience were asked to sit at the table, where five other women sat, some young and some old.

“It’s very much about how a lot of women feel about their bodies. It’s part of the female existence to be so aware of your body,” explained actor Cat Preston. “[It’s] about what people are thinking around a dinner table, and what that can bring up for them.” 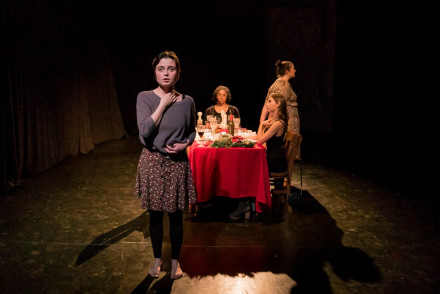 “Can You Pass the Guilt Please?” shows how each woman navigates a meal while dealing with the overbearing sensation of being conscious of their body at all times. Courtesy Antoine Saito.

As conversation on the stage begins, the scene freezes, and viewers are drawn to the thoughts of a young woman that are played overhead. She’s obsessed and fixated on her own perfection, her appearance and thin body are praised. But her confidence is riddled with anxiety and doubt. She might change her mind at anytime, and sink the next second into self hate, and the two extremes mingle side by side, compensating each other. She worries her family is trying to attack her by overfeeding her, and hysterically runs around the table.

The scene continues, exposing the thoughts of every other woman at the table, showing how each woman navigates the meal while dealing with the overbearing sensation of being conscious of their body at all times. By the end of it the women are all up and running around the table, their thoughts now playing all at once, while the men continue to sit at the table—their thoughts unheard.

The next show demanded the audience wait in an inter-dimensional waiting room. Once we’d get in, we were promised we’d get to see purgatory.

When we arrived we were given stones and a cloaked man introduced us to a room full of objects, and each of the objects had played a part in the death of a different individual.

We were told to look around, until eventually the cloaked man asked that a viewer choose two objects, which would determine the outcome of the performance. Then we were led into purgatory, where two lost souls were found.

The audience acted as the jury, and while the two souls told stories of misdoings that led to their downfall, it became apparent we would soon have to decide which one would have to stay in limbo and which one was righteous enough to go on to salvation.

“Each person has done something awful,” explained actor Gabrielle Banville. “We wanted to ask the audience, if you were actually the jury, what decision would you make?”

After hearing both of their pleas, we voted with our stones, and as the rejected soul started to scream we were soon ushered out.

After walking, I followed a group of people until we ended up in a dark room.

Inside, our main character Eva was seated on a hospital bed while viewers stood around her. She asked us if she was dead, but no one replied—we wouldn’t have been sure either way. Thinking out loud, she remembers things weren’t looking good for her before getting here, she was suffering from a fatal heart condition.

“Is this what we do here? We just stand? Then I’ll join,” she said, moving to stand with us.

“Why are you staring at me?” she said to one man, who blushed upon being put on the spot.

“Did you know that butterflies taste everything with their feet?”

She kept asking us questions but we didn’t know how to help, she later accepted it and returned to sit on the bed. She discussed her regrets in life, urging us all to live life to the fullest. The beeping of a life support machine played in the background until an opening appeared, light pouring out of it. She walked through, realizing it was her time to pass on.

Guests can opt out of any interaction, and are reminded to dress in layers and bring slippers, since some shows vary in temperature and others ask that viewers remove their shoes. One scene includes a 30 degree room, so mentally prepare yourself if you plan on going.