It was a special season for the Concordia Stingers men’s hockey team. With highs of a Corey Cup win and all-star honours paired with the lows of a post holiday struggle for consistency, the 2017-2018 season is one that Concordia can look back on with pride.

The Ontario University Athletics bronze medal title and a berth at nationals are certainly no small feats, especially considering that this program struggled to make the playoffs just a few short years ago.

With an 18-10 record, The Stingers battled their way through three round of the playoffs, falling to cross-town rival McGill in a do-or-die game three but coming back to defeat the York Lions in the bronze medal game, finding their way into the nation’s eight best teams for a shot at nationals.

Few expected this kind of season at the start of the year. Losing offensive powerhouses Anthony De Luca and Olivier Hinse to teams in Denmark looked to be too big of a blow to recover from.

“I had the feeling going into training camp that we were going to have a team that had more depth and that everybody was going to be able to contribute. I had a better feeling [than last year].” said forward Philippe Hudon, whose playoff heroics—eight goals and four assists in just eight games—pulled his team within a goal of going to the OUA finals.

The depth that Hudon saw created one of the country’s most dangerous offensive units. The Stingers were more than capable of overcoming their offseason losses.

An average of 3.93 goals per game had them ranked sixth in U Sports. They also finished sixth in power play goals and eighth in shots per game. 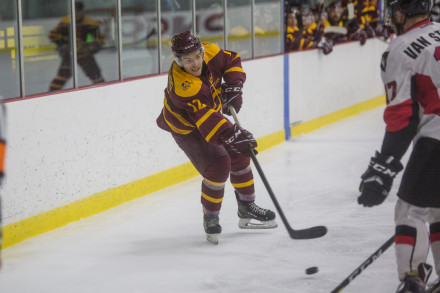 The Stingers were loaded with offensive powerhouses like forward Anthony Beauregard, who took home several honours this season, but most notably was named U Sports’ most outstanding player this season. File photo Daren Zomerman

The team found offense from all corners of their lineup. At the heart of the production was U Sports’ most outstanding player for 2017-2018 and a first-team all-star, Anthony Beauregard.

The second year forward led the entire country in points (60), assists (41) and was second in goals (19). For scale, the next highest scorer finished the season with 46 points.

That performance was good enough to earn the St. Damase native an amateur tryout contract with the Laval Rocket, the American Hockey League affiliate of the Montreal Canadiens.

Around Beauregard were rookie powerhouses Carl Neill and Massimo Carozza. Neill earned all-rookie team honours from U Sports, finishing the season as the country’s top scoring defenseman with 31 points while anchoring the team’s top spot on the blueline.

Carozza flew up the Stingers depth chart this season, eventually flanking Beauregard to form one of the deadliest duos in the country. He would finish the season third in OUA scoring with 35 points and would be named to the OUA East all-rookie team.

Add diminutive sniper Philippe Sanche, dependable rookies Jean-Philippe Beaulieu, William Gignac and Alexis Pepin, and a strong supporting cast of talent, backstopped by number one goaltender Marc-Antoine Turcotte and you have a recipe for success.

This success was the kind that the program hadn’t seen in over three decades; a trip to the national championship.

None of the players on the current roster had been born the last time Concordia earned a spot in the tournament, and neither had head coach Marc-André Élement.

“The biggest challenge for this program leading up to this year was ‘are we able to get there, are we able to earn our berth in nationals’,” said Hudon.

Their trip, though cut short due to an early loss to defending champion University of New Brunswick, was one that proved to the team that they are a top team in the country, capable of competing with the best.

The fact that they now have that experience and that knowledge allows for a major shift in the team’s mindset.

The team is taking the loss as a lesson and as motivation.

“It was good, it was eye opening for us,” said Neill of the trip Fredericton. He and his team saw what it takes to become national champions and are ready to push themselves to get there.

“We’re going to be better and more prepared next time we go,” said Élement, promising that it won’t take 34 years this time.

While those are good words, Hudon knows that this means the team must keep building on the experience and work to improve off of it. The momentum that the team gained from this season has to be ridden, not dropped in the offseason.

The team is already getting set to head back to preparing for next season and are certainly showing a hunger for another crack at the national championship.

Though he may not be with them next year, Beauregard has no trouble seeing the Stingers back at nationals next season. He knows just how good the team is.

“This year we had a pretty good team. Next year, […] they [still] have a lot of good offensive players and great defensive guys too,” said Beauregard. “The next two or three years, all the teams will be scared of playing in the Stingers.”

Building From the Bottom Up

It’s been a long road for the program to get where it is now. It’s gone from a team counted out in the first round—if it even made the playoffs, to a true contender and one of the country’s best. Veterans who have watched the change from within are in awe of what the team has become.

“There’s nothing better than to be part of something bigger than you are. Meaning you started from the bottom of the standings and you made your way to the top eight teams in the nation,” said Hudon “In sports there’s rarely a better feeling than to claw your way up.”

The man at the heart of this development is Élement. The former Stinger has spent three seasons as the team’s head coach now, and each year has built on the previous one. From the day he got behind the bench, he’s looked for a culture change.

Everyone in and around the team lauds the professional environment Élement has created. He’s preparing players for pro careers and making sure they behave as pros while they’re under his scrutiny.

“[Marc-Andre] is incredible, I don’t know how he does it,” says Beauregard, citing Élement’s coaching and recruiting talent as the driving force in the program’s turnaround.

From day one, Élement wanted to make recruiting more of a priority. That mentality has payed off in spades. It’s produced a young team filled with talent coming out of the junior ranks.

Of the team’s 26 players, 15 were first or second year players this year. Only one was a fifth year (third-string goalie Antoine Marchand) and only two were in their fourth year (Hudon and Scott Oke). 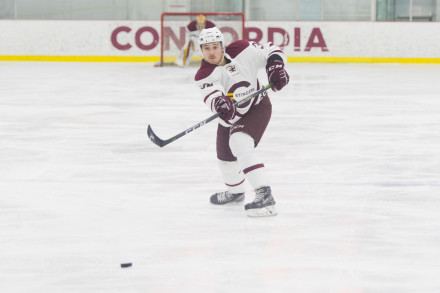 The team found success in a solid defence core this season in players like rookie, Carl Neill, who was named to U Sports all-rookie team. File photo Daren Zomerman

The last two years have been stories of rookie success stories. Anthony De Luca was rookie of the year for 2017 while defender Alexandre Gosselin made the OUA rookie all-star team. This past season, Neill and Carozza both earned similar honours.

Élement consistently puts trust in these young players and has yet to be given a reason to regret it.

“Marc gives us a lot of ice time and responsibility at a young age. With the support we had here it was easy to perform,” said Neill, crediting the coach’s confidence as a major asset for him.

While Élement and the team may be losing “key guys” in the likes of Beauregard, they’re also bringing in some new recruits that have the team very excited. Élement says expectations are already incredibly high for these players. Expect to see five or six players make the jump from the Quebec Major Junior Hockey League to the Stingers very soon.

With a year like this to build on, the Stingers may just be headed for another special year. They certainly are in the eyes of a departing Stinger.

“The future will be great for [the Stingers],” said Beauregard.