The Stingers women’s hockey team came into Saturday’s game versus Université de Montréal looking to add to their five game winning streak after shutting out their last two opponents.

Artisan of the squad’s most recent shutout, Alice Philbert, was in net for Concordia— an important vote of confidence from head coach Julie Chu.

Philbert had to fill in the starting job for an injured Katherine Purchase in the early stages of the season. She put up a strong record, allowing Chu to send her into action with confidence against any opponent.

“Alice is a great player,” said Chu. “She’s done a great job for us. We have three great goaltenders that can play. It gives us a lot of flexibility and we love that.”

Philbert’s performance was all the more impressive considering that she managed to shut down one of the most lethal offences in the league. She had a hard time taking credit for the win. 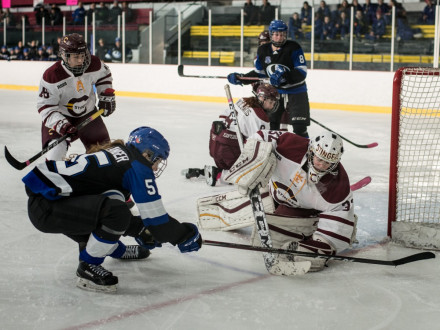 Goaltender Alice Philbert was a standout for the Stingers, stopping all but one of the shots she faced. Photo Sarah Boumedda

“I feel confident,” she said. “But the fact that the team plays a full 60-minutes made it that much more easy for [the goaltenders]. They keep the shot on the outside which we appreciate as goaltenders.”

Concordia benefited from Philbert, but their goalie was not the only one determining their victory.

The duo of Audrey Belzile and Lidia Fillion were once again essential to the Maroon and Gold’s success. Belzile scored the insurance goal while adding an assist, and Fillion was able to find the back of the net on two occasions.

“Lidia had some injuries early on in the year,” said Chu. “But now she’s playing some really great hockey. She’s doing a great job for us. She’s steady, solid, we are really happy with the way she is playing.”

Fillion, who now has seven goals on the season, shares the title of the team’s top scorer with Belzile and Sophie Gagnon. 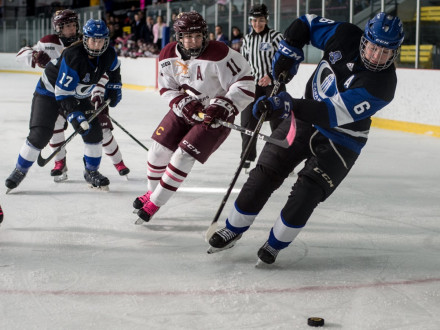 Saturday’s game raised over $1, 700 for breast cancer research, partly in thanks to Stingers football’s Jerome Bedard-Guillemette who volunteered to have his luscious locks and beard shaved as his own contribution to the event. Photo Sarah Boumedda

Despite a plethora of quality scoring chances, Concordia was unable to convert in the first frame. The first goal came five minutes in to the second period, when Fillion finished a setup from her linemate, Belzile.

“It was nice to finally find the back of the net,” said Belzile. “Lidia is a natural scorer and it will be essential for the team if she can keep it up.”

Fillion added her second before the end of the frame, this time on the power play. She simply had to lift the puck past Montreal’s netminder Aube Racine following a great individual effort from standout rookie Rosalie Bégin-Cyr.

Montreal’s lone goal came off an offensive turnover by Gagnon, a rare bad play from the veteran forward. The Carabins ran the play right back up the ice, culminating in a beautiful forehand-backhand breakaway goal by Annie Germain.

The Stingers are now trailing Montreal by a single point in the Réseau du sport étudiant du Québec rankings, as the Carabins have a game in hand over the Stingers.

But there’s still a serious chance for Concordia to finish atop of the standings. They’re set to take on the University of Ottawa Gee-Gees next Sunday at Ed Meagher to close out the regular season.

Saturday’s game was a part of Pink in the Rink, an initiative organized by the Stingers that aims to support cancer research. Stingers linebacker Jerome Bedard-Guillemette commemorated the event by volunteering to have his mane of hair and beard shaved off. With this effort and in collaboration with the women’s hockey team, he raised more than $1,700 for cancer research