In a match that pitted two of futsal’s biggest rivals against each other, it was Sporting Montreal who took the three points over Cinque Stelle FC.

“It was very difficult for us to establish our rhythm,” he continued.

Cinque Stelle’s defensive reputation preceded them, as their patient approach to the game paid off in the first half. At halftime, the teams were knotted at two goals apiece. Cinque Stelle scored two unanswered goals after being down a pair in the opening minutes.

Sporting eventually took their opportunities in stride, scoring three of their five goals in the second half, after Cinque Stelle’s rhythm began to break down. Michaud said the game would hinge on the little details on the field. In the lead-up to the game. Unfortunately for Cinque Stelle, this was the case.

“Sometimes those half-second intervals between runs make the difference in scoring or getting scored on,” said Cinque Stelle’s Alejandro Julian. “At the core of it, synchronization is what lacked the most. 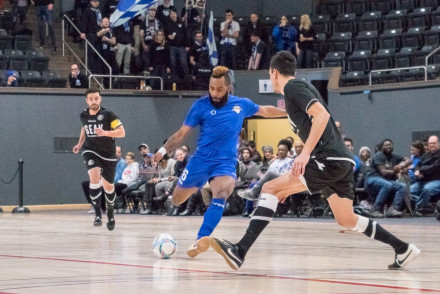 Berlin Jean-Gilles (in blue) was sitting on 99 career league goals. He was forced to wait for his 100 on Saturday. Photo Elisa Barbier

Cinque Stelle captain Eduardo Herrera highlighted that the team needed to be consistent for the full 50 minutes. He added that defensive communication proved costly, as well as missed opportunities on offence.

Montreal’s goalkeeper Adam Ghemari was the difference maker, keeping his former team out on several occasions in moments when Cinque Stelle were gaining momentum.

The game was a competitive contest. Although Sporting came away with all three points, what both teams had in common was their gratitude to be able to play at the fundraiser. For Michaud, it was especially an emotional experience.

Michaud, who is from Haiti, expressed that being invited to the event was something that touched him. Michaud added that is grandmother was happy for him when he told her the news.

“The work that Maison D’Haiti [does], it’s recognized from all communities around Montreal,” he said. “To be able to tell myself I’m helping I’m helping in a way to contribute to the work that I do, I feel very nice about it.”

Alexandre Kénol, who helped organize the event, he said one of the goals of the event was to bring people together. For Michaud, he hopes this event will open the doors to do more within the community, even if it doesn’t involve sports.

“To go help in summer camps [that Maison D’Haiti have]. To be able to help, to show them we are willing to participate in something, it creates the communication between both organization,” said Michaud.