Scotty Bowman: from Verdun to Immortality

Autumn leaves descend upon the quiet streets of 5th Ave., one of six numbered streets that form “the Avenues” area of Verdun. The block between Verdun and Bannantyne is a continuous three-story-high brick wall of sixplexes. Neighbours chatter across balconies. Children run, screeching down the street. Apartment upon apartment, family upon family, it’s been the same since 1933. The year the most successful coach in the history of the NHL was born.

Scotty Bowman, the godfather of hockey and serial champion, whose fanatical knowledge of the game and relentless pursuit of victory birthed some of the greatest hockey teams in NHL history.

"You hated him 364 days a year, and on the 365 day you got your Stanley Cup ring." So goes the now famous saying on Bowman, first uttered by former Montreal Canadiens star Steve Shutt.

Ken Dryden, another former Canadiens player under Bowman, writes in his book The Game that, “Bowman may be a lot of things, but he is not someone you like.” He was known as hard-nosed and irascible. But he got results.

“He has by far the records for most everything,” said hockey historian Eric Zweig. “Most games, most wins, most seasons, most playoff years, most Stanley Cup wins. No one’s really close.”

Born to Scottish immigrants, Bowman grew up playing hockey on the wide, carless streets of Verdun, or in Willibrord park, where five rinks were put up each winter. Later, he played for the Canadiens’ youth teams. At 17, a vicious hockey stick strike to the head ended his playing career early, but more importantly started his coaching career. 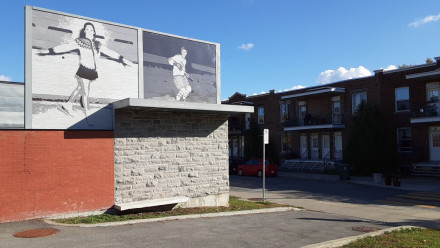 Bowman grew up on the quiet streets of Verdun, Quebec. Photo Thomas Lundy

He began coaching youth hockey and spent the next 16 years watching, learning, and growing as a coach.

His first NHL coaching job was with the St. Louis Blues. But Montreal is where Bowman first showed what he truly was: a winner.

Once a stadium, now a ghostly, echoing shell. Shoppers walk across the formerly hallowed ground, head down, smartphones out. Their footsteps reverberate around the cavernous lobby, the gateway to a generic assortment of cinemas and sports bars. The scent of popcorn hangs in the air. Yet there are clues; hockey rink markings underfoot, Canadiens flags overhead, old stadium seats glimpsed from the corner of your eye. Now an underutilized mall, the Montreal Forum was once the setting for Bowman’s greatest achievement.

“His is a life that no one else will live again.” – Ken Dryden

Between 1973 and 1979, the Canadiens, under Bowman’s tutelage, won the Stanley Cup five times—including four consecutive wins between 1976 and 1979. Canadiens fans were used to winning when Bowman was hired—they’d won 10 of the previous 16 championships. But those four consecutive championships defined the childhood of a generation of fans.

Life-long fan Denis Bergeron started following the Canadiens in 1970 at five years old and saw them play under Bowman. “Scotty was my first real Canadiens coach,” said Bergeron. “He was very respected. Although we had already won five consecutive cups in the ‘60s, Scotty’s team is still considered the best team that ever played the game. They are legendary.”

Bowman eventually left Montreal with a bitter taste in his mouth. In Dryden’s 2019 biography on Bowman, Scotty: A Hockey Life Like No Other, he describes that when General Manager Sam Pollock stepped down in 1978, Bowman believed he deserved the position. Yet he was passed over. Bowman came off as “whiny and conspiratorial” the following year, but still won the cup. Then an offer came too good to refuse: coach and GM of the Buffalo Sabres.

When Bowman left Montreal, so did success. It wasn’t long before newspapers reported a change in fortune. The Sherbrooke Report noted in January 1980 that the Canadiens “have shown signs of crumbling ever since Sam Pollock retired as GM and Scotty Bowman resigned as coach.”

Success, however, never left Bowman. Over the next 23 years, Bowman coached and managed in Buffalo, Pittsburgh, and finally Detroit—the home of his second greatest side, which included the famous “Russian Five.” Hockey changed, but one thing didn’t: Bowman expected the best from his players. 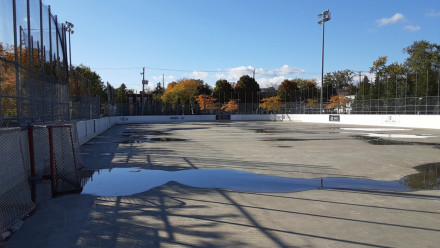 Bowman’s playing career was cut short after he was hit in the head with a hockey stick in juniors. Photo Thomas Lundy

The 2018 film The Russian Five chronicled the famed Red Wings team that won the championship under Bowman in 1997, 1998, and the final season of his career, 2002. “I’m demanding if I feel the players want it,” said Bowman in an interview for the film. “I’m a stickler for detail.”

Even after retirement, Bowman stayed active in hockey. He became advisor to his son Stan, and GM of the Chicago Blackhawks in 2008, where they won the championship three times.

No other coach has lived, seen, and won so much of hockey history. He’s revered throughout the hockey world. But Bowman, the boy from Verdun who grew to conquer the hockey world, will always be remembered as a Montrealer—one of its finest.

In the words of Dryden, “His is a life that no one else will live again.”