Counter-Protesters Hope to Expose the Province’s “Darker Side”

La Meute said that they are concerned with the number of immigrants entering the province throughout the summer.

“Many people in the world are living off less than $3 per day. It’s unfortunate, definitely. But Canada does not have the means to support all these people,’’ said La Meute member Sylvain Brouillette, who argues that the government should be putting money to more important things.

‘’We can’t accommodate everyone,” Brouillette continued.

La Meute is best known for its anti-immigration and anti-Islamic rhetoric. While many members of La Meute claim not to be racist, many in the province disagree with the statement and have denounced them for being islamophobic, xenophobic and racist.

Before 1 p.m., La Meute gathered underground in a parking complex near the National Assembly on Louis Alexandre Taschereau St. But when posts from La Meute’s Facebook page disclosing the location were leaked to anti-fascist groups, counter-protesters gathered outside in an effort to stop them from coming out. Heavily geared riot police and La Meute’s security team blocked counter-protesters from coming into contact with them.

‘’Where there’s far-right racists or fascists trying to take up public space we need to prevent them from taking up that public space,” said activist Jaggi Singh, who helped in mobilizing a Montreal contingent.

“We look to the U.S. with an air of superiority, as if this doesn’t happen here,” continued Singh. He wants Quebecers to know that we also have a darker side. “Their ideas are nauseous,” he said.

“La Meute is profoundly violent group,” Singh said. “But they save their violence for moments when they’re not under scrutiny by the media.”

When it comes to violence used by the left, Singh argues it’s different since violence on their side is used as a means of self-defense above anything else.

“It seems like [the police are] protecting La Meute, which is not uncommon especially since Quebec police have been known to be quite nationalistic,” said one counter-protester, named Nadege.

La Meute, with about 300 to 400 in attendance, remained in the basement of the parking lot while counter-demonstrators waited for them outside. At the peak of the protest, near 2 p.m., almost 1,000 anti-racist and anti-fascist protesters held the streets.

“It seems like [the police are] protecting La Meute, which is not uncommon especially since Quebec police have been known to be quite nationalistic,” said one counter-protester, named Nadege.

Counter-protesters moved away from the parking lot and took to the streets.

Confrontations broke out between police and counter-demonstrators, who at one point lit fireworks at police.

Violence continued by George VI Ave. West and Grand Allée East where glass bottles were thrown at police who were lined up downhill at Jacques-Parizeau St. They also sent a flaming dumpster at police, though they were not hit.

While this was happening, the La Meute crowd was getting ready to parade out of the parking garage, but police instructed them to remain inside.

With the heat and lack of ventilation in the parking garage, they sat in frustration. One woman fainted, but eventually stood up again after some minutes. Leaders continued on with speeches in an attempt to keep the crowd motivated. They also did not have access to washrooms. 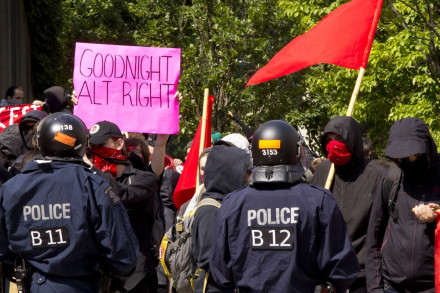 La Meute was still trapped inside the parking lot around 3 p.m. One member came out to confront the media, loudly telling them that the reason they weren’t coming out was fear over the violence they would have to face from counter-protesters on the streets.

At 4 p.m., one of the garage doors opened and a number of counter-protesters ran inside. One aimed mace at a police officer who stood at a distance from him. Tensions rose, and counter-protesters continued being pushed out by the police, who had then declared the protest illegal and were threatening to make arrests.

Singh, with his megaphone and portable yellow speaker box, found himself behind the riot police lines and was thrown to the ground and arrested.

Singh was later released in a part of the city which he said he did not recognize was told he would receive a ticket in the mail. The infraction remains unclear. He took a taxi to return to the group. 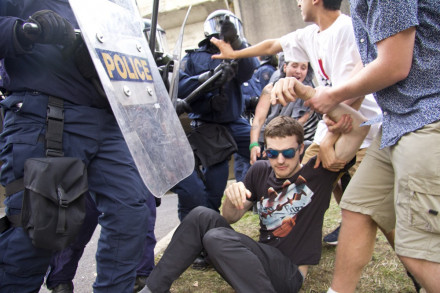 Police then escorted La Meute members out of the parking lot, beginning with women and children.

The La Meute protest around the National Assembly ended about an hour later.

Quebec City police said they are investigating “active participants” of the illegal protest with the help of “images, videos and information.” They also said to expect arrests.