All But One Party, the Liberals, Promote Access to Free Education for Quebecers

Many parties endorsed free education, except the Liberal Party, the Coalition Avenir Québec and the Parti Québécois. Jennifer Drouin from the PQ and the district of Sainte-Marie-Saint-Jacques said the PQ would like to reinvest in bursaries and loans.

Christopher Skeete the CAQ candidate in the Sainte Rose district, said the party does not want to further increase tuition.

“There is no magic solution, we cannot make education free right now,” Birnbaum said. “If you go to school you have to pay for it.”

With contrasting opinions to the Liberals, Raphaël Fortin, the leader for the New Democratic Party of Quebec, said he stands with the Green Party and Québec solidaire.

We should see free school not as an expense, but as an investment, Fortin said. He added that when students are in debt they can’t advance the economy.

CAQ: no surprise tuition increases, up according cost of living, as we already do.

Gabriel Nadeau-Dubois, the co-spokesperson of QS, said there are many places that already have free education.

“The cost of free education is $1 billion,” he said, adding that this is less than one per cent of Quebec’s manual expenses.

“We can disagree, but I don’t think it’s impossible,” said Nadeau-Dubois. He stressed Quebecers just have to make it a priority.

“Quebec is very lucky to have the lowest tuition in Canada, at times it is inaccessible,” said Skeete.

“A just society for me is a society where people have access to education, that’s the reason why at the CAQ we propose to never shock your tuition by radical increases we’ve seen previous governments do,” said Skeete.

He also promised the CAQ would like to limit barriers from paying tuition, such as the ones posed on students who receive alimony or child support.

Recently the Liberal government deregulated international tuition fees and if elected would allow universities to charge whatever price they want by the start of next fall.

“I think the Liberal party of Quebec did a big mistake by deregulating completely tuition fees for international students,” said Nadeau-Dubois. “The first consequences will be that we will not recruit the best students, but we will recruit the students that have the means to pay for [their tuition].”

He said QS proposes to reverse deregulation of international tuition.

“[We want to] reduce tuition fees for international students to $5,000 a year, which is a lot less than they pay on average right now,” said Nadeau-Dubois.

“We’re very favourable to letting everyone study, regardless of the financial means that they have to pay,” said Alex Tyrrell, the leader of the Green Party of Quebec.

“We want to multiply within the Francophone collaborations between higher education establishments to,” said Drouin. 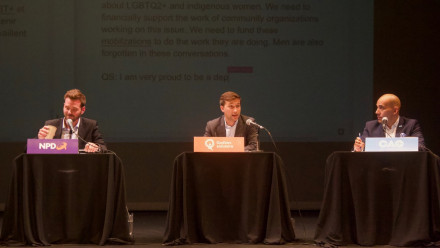 Fortin said we need international students. He said it is a huge advantage to have free education for everyone and that more people will stay and contribute to the economy.

“Foreign students get the chance to come to our rich, beautiful and wonderful province” said Skeete. “At the same time they get to benefit from quality education, state of the art education at relatively low cost.”

Skeete said the current price of university offered to foreign students is not very expensive and accessible.

This school year, tuition for international students in the John Molson School of Business will equal about $22,838 for students with a full course load.

“Even though it’s rising, or has risen, it’s some of the least expensive schools you’ll find in North America,” Skeete said. “It’s a win-win for us, it also allows us to finance students who are not foreign students, so it allows us to have a little more money in the network to invest more in all students.”

“However, we at the CAQ do not believe the price should go above inflation,” said Skeete.

This year sexual misconduct complaints surfaced at both Concordia and McGill university.

Fortin said the Liberal party’s passing of Bill 151—an act to fight and prevent sexual violence in higher institutions—was a good start, but it should have gone further.

He said we not only need to mobilize with more women, but we must also include Indigenous women and LGBTQ+ communities in solving the issue.

Nadeau-Dubois said QS is a feminist party and leader Manon Massé has improved a five part plan of action.

QS want to add courses on sexuality and health relationships at every school in Quebec. #polqc

Skeete agreed saying the party would like to increase the time survivors can bring forward complaints.

“We also propose reimbursing victims who participate in the court hearings of the accusers,” said Skeete.

He also called out the issue of student-professor relationships. “We think that there should be a three month period following [the posting] of final grades,” he said.

“Victims of sexual assault [shouldn’t] have to go and knock at different office doors to get help,” said Tyrrell. “There should be one place that people can go to on every university campus.”

Drouin said the PQ is the only party to create a proposal to initiate a whole separate chamber to deal with cases of sexual assault.

She said the PQ would also like to see better police training to combat sexual violence in all institutions.

“Most internships involve real work, so there should be real pay,” said Skeete. Fortin also agreed.

QS also believed internships should be paid, as Nadeau Dubois pointed out that more often women are paid less according to what they study.

It doesn’t make sense to do the same work as a regular worker and not get paid, said Tyrrell. However, he said non-for-profits and community organizations should still be able to have unpaid internships so that they can keep volunteers.

Drouin said the PQ wants to create a committee on the internship remuneration and use the findings of to create policy. The PQ is in favour of teaching internships being paid.

Birnbaum noted that the Liberals began internship remuneration or teaching students in their last stage, and said the party could look at funding other internships.

In closing remarks, Fortin pointed out the divide within left wing politics. He said he is tired of seeing people attacking each other on the difference of their policies, instead of working together.

“The left wing parties—it’s what they didn’t learn in the last 40 years—instead of working together they are separating themselves,” Fortin said. “The right part of the politics, they know how to win.”

“For the first time in history, you guys, the baby boomers, have the same power,” Fortin said. “So go and vote”

“The most important thing is that you actually get out and vote, because you are the future, you are the youth” Drouin said. “If you don’t actually exercise your vote, then you don’t have a say.”