When the Fury took to the pitch to face Toronto FC II on Saturday afternoon in Ottawa, the latest USL rivalry was officially born.

The city is a little more to the west of Montreal, their stadium is the recently renovated TD Place in the southern part of town and it can seat a couple thousand more fans. The new rivalry game which the Fury and the USL called the “Battle of Ontario” coincided with the team’s home opener.

Despite it being the very first game these two teams played against each other, the organic rivalry between the two Ontario cities didn’t take long to spark. Near the end of the game, Toronto defender Brandon Aubrey was pushed to the ground in a play that few people saw, referees included. The incident took place right after a penalty kick had been awarded to the Fury.

Fury FC head coach Paul Dalglish thought that the aggressiveness in the latter stage of the game pointed to a budding rivalry between the inter-provincial teams.

“It certainly got that way in the end,” said Dalglish about an Ottawa-Toronto rivalry after the game. “But the biggest rival we’re ever going to have is ourselves.” 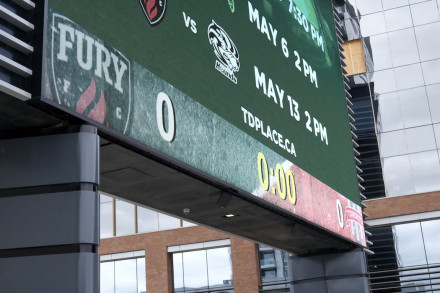 A heated scruff in the 84th minute led to a red card for defender Andrae Campbell. The dustup may have affected Gerrardo Bruna, who took the ensuing penalty kick. His shot clanked off the left post, and the late chance fell by the wayside. The two teams left TD Place with a 0-0 draw.

For the Fury, an independent USL team affiliated with the Impact, bringing the Toronto-Ottawa rivalry to soccer is a great thing regardless of whether the team in front of them is called Toronto FC II and acts as a second team to MLS’ Toronto FC.

“I wouldn’t call it frustrating,” said Fury FC captain Lance Rozeboom. “A ‘two-team?’ Yeah, we’ll play a few of them throughout the year but you take every team and every game as they come and you just go out and make a good performance and I think we did that today.”

There will always be a rivalry with Toronto, he said. “They’re a few hours down the road so it will always have the feeling of a rivalry no matter who they put out there.”

Ironically, the only former Impact player to play for more than just a few seconds was on Toronto’s side. Defender Brandon Onkony, who signed for TFCII earlier last week, subbed in at the 79th minute for teammate and defender Jelani Peters. Ottawa defender Thomas Meilleur-Guiguère, on loan from the Impact, was subbed on with mere minutes left in the game.

In attendance to witness Ottawa’s inaugural home opener in the USL was league president Jake Edwards. He also gave further clarifications on the reason FC Montreal departed from his league.

Edwards and the Impact then mutually agreed to terminate the affiliated second team and discussions around affiliation with an independent USL team started. Ottawa, who had recently joined the USL over concerns with their former league, was a fit for both Edwards and the Impact front office.

Support for a Canadian League

Rumblings from across the country have pointed to the advancements of an upcoming Canada-only soccer league. Dubbed the “Canadian Premier League” by many, the proposed project would have Edwards’ support.

The USL president has admitted to have had “started some pretty substantial conversations” with the Canadian Soccer Association “in terms of how we can help.”

“We would fully support a professional league here. I think there absolutely needs to be one,” said Edwards.

After mentioning the fact that the USL housed more than 70 Canadian players, some of which play on the Canadian youth and senior national teams, Edwards added that a league of their own would allow Canada to build their way to having a national team that would compete in a FIFA world cup. Potentially helpful is that Canada is bidding to co-host the World Cup with the United States and Mexico in 2026.

“Ultimately, there needs to be a league here though and I think all signs seems to be heading in that direction,” said Edwards. “When that will happen, I’m not totally sure but I think over the next few years we’ll see a league here.”