After two relatively calm French language debates—an official one held on Friday and an unofficial one on the TV show Tout le monde en parle —incumbent Mayor Denis Coderre and official opposition leader Valérie Plante became animated as they debated for the first, and only time, in English Monday night.

It was only seven minutes into the debate when Projet Montréal leader first began speaking over Coderre, a favour he later returned.

While responding to a question about construction and the city’s infrastructure projects, he explained how the money—$2.1 billion a year, he said—and navigation headaches are a “short-term pain, long-term gain.” A mention of the St-Denis St. construction project, which left many business crying for help last year, was when Plante chimed in.

"I understand some of the frustration" DenisCoderre</a> says that construction in the city is a short-term pain, long-term gain</p>&mdash; Kelsey Litwin (kelseylitwin) October 23, 2017

On her end, she said, “Construction is a part of life,” but that it needs to be carried out efficiently. In response to Coderre’s St-Denis St. comments, she pointed to the ongoing problems with construction taking place on Bishop St, near Concordia’s downtown campus.

“It’s hell. People don’t know where to go. Shops are closing because the management is not there, the communication is not there,” she alleged.

The two candidates’ defensive tones stuck with them throughout the rest of the evening, coming out strong when the Formula E-Prix was mentioned as a part of the conversation on Montreal’s controversial 375th anniversary spending.

When the E-Prix is brought up, Coderre says there will be a report. Plante asks for # of tickets sold

Both Plante and moderator, CJAD 800’s Leslie Roberts, asked Coderre about whether citizens will learn the total number of tickets that were sold for the event which garnered a lot of attention, and criticism, in July. Coderre maintained that they were awaiting the number from the event’s promoter.

“I’m curious,” he said, mentioning that a report will be coming out. He did not say when that is to be expected.

When asked, “Did Montreal get its money’s worth with the 375th?” Coderre’s response was, “Oh, totally. We did great.”

Plante, on the other hand, said “What’s in it for us?” and, “How did it improve our city?” were questions that Montrealers had about the celebrations, and that they felt there was a lack of transparency in how the $1 billion was spent. Throughout the evening, Coderre restated that 41 per cent of that money was invested by the provincial and federal governments.

Tensions seemed to be at an all time high, however, when Coderre took the opportunity to question Plante’s initial response to the passing of Bill 62, a provincial law which would ban anyone with their face covered from receiving public services.

When the law was passed last Wednesday, Plante had at first said that she “agreed with [its] principle,” but backtracked hours later to say that she was against it, a point that she stood by Monday night.

Plante says neither candidate will experience the discrimination so they need to work together. Coderre: "Nice try."

“This is not a competition,” she said as Coderre pressed her on last week’s response. “This is not about you, and this is not about me.” She continued that neither candidate would face discrimination as a result of the bill, and they need to work together.

“I’m happy you changed your mind, but what happened?” Coderre asked nonetheless. 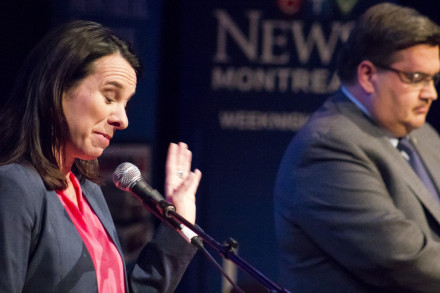 While they continued to differ on points, such as concern surrounding the possibility of a housing bubble like in Toronto and Vancouver, and the efficacy of Montreal’s new dangerous dog ban, both candidates agreed that renaming streets, such as Amherst, is a step forward and that as an issue of public safety, services should be offered in English and French. They both also acknowledged the importance of increased social and affordable housing.

Currently, 15 per cent of all new housing units built in Montreal must be designated for community or social housing. Plante said that if elected, she would work to raise that number to 20 per cent. She also said that a longtime goal of Projet Montréal’s has been to buy land on which they’d be able to build “economic, social and cultural” projects.

Coderre, responding to Plante’s allegations that his administration has not added any social housing units, said that the city’s metropolis status and successful negotiations has awarded the city autonomy to make decisions in regards to housing, he said, emphasizing social diversity.

“Not only just affordable or social [housing], but student housing,” Coderre continued. In February, the city pledged $500,000 to the Concordia Student Union Housing Project, which is being built on the corner of Sherbrooke St. East and Papineau Ave. The total price tag is expected to ring in at $14 million.

The focus on student housing, he said, is a part of their attempt to engage Montreal’s youth. That is on top of his new pledges for a youth council in each borough, which he said would receive $500 each to manage.

“To be inclusive also means to provide them with the tools to participate,” Coderre said.

Points of Contention Until the Very End

When given the opportunity to ask their own question to their opponent, Coderre chose to look internationally—he asked if Plante supported the Boycott, Divest, and Sanction movement against Israel.

“I think it’s important to understand the international context of this,” she answered, saying that the decision would need to be made by her team. When pushed for an answer, she stated that if she were to travel, she’d look at both sides, and visit both Israel and Palestine.

When asked what she thought of the question, Plante said that “it is strange, that we’re at the municipal level. She continued, “but ultimately, it took me a while to answer because it is not BDS that will support peace in the Middle East.”

Upon her turn, she asked Coderre, “Will you be the leader of the opposition if I win on Nov. 5?” Her intention in asking the question, she explained, was that “opposition is very important for democracy.”

His answer: “I’m going to be the mayor.”

Elections take place on Nov. 5, with advanced polling on Oct. 29. More information can be found on Élection Montréal’s website .