If the last five minutes of Concordia and McGill’s first men’s hockey matchup had gone differently, the story of the game would be a weak third period from the Stingers.

Instead, violence and injuries became the dominant narrative of the game. In a game full of penalties and some violent scrums, Stingers goalie Marc-Antoine Turcotte and top forward Philippe Sanche were badly injured under questionable circumstances.

Sanche had been wearing a full face mask in order to protect vulnerabilities resulting from a previous injury. This didn’t stop an opponent from getting through the plastic mask and hammering several punches into Sanche’s already injured face.

With a rivalry like Concordia/McGill hockey, thing were expected to be heated from the start. It showed early in the game. Eight minor penalties were called in the first period alone. By the time the game finished, nearly 30 penalties had been handed out, including game misconducts.

The first came less than two minutes in, after the first injury of the night.

A McGill player collided with Turcotte sending him to the ice. Forward Francis Brunelle pushed the player off of the injured Turcotte and earned a cross checking call and McGill a powerplay. Turcotte was down for several minutes before leaving the ice with difficulty and the help of the medical staff and a teammate. 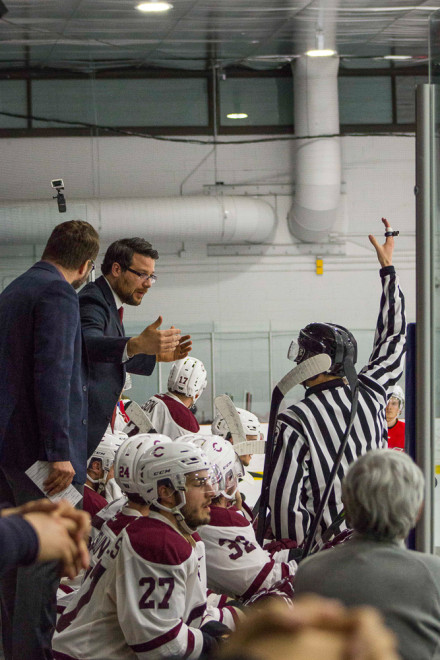 The two teams face off again in a weeks time, and the Stingers are looking to avenge their loss. File Photo Kelsey Litwin

Backup Olivier Tremblay came out and performed well despite the score. His team was heavily outshot and could offer no offensive support in the third period, which they entered tied 3-3.

“[Tremblay] is a heck of a goalie. He plays the puck real well. He kept us in the game late multiple times. We have confidence in him,” said Stingers defenseman Carl Neill.

He probably shouldn’t have had to “keep [them] in it late” as the Stingers earned over seven minutes of powerplay time late in the second thanks to a major penalty and game misconduct for contact with the head by McGill’s Nikolas Brouillard, and a too many men on the ice penalty for McGill.
The Stingers led 3-2 when the penalty time began and were tied at 3 by the end after giving up a shorthanded goal and being unable to really threaten on the man advantage.

“When you don’t score you lose momentum and they get [it]. Our special units have to be way better,” said Élement.

The third would offer no better as the Stingers surrendered two more goals and, eventually, an empty net marker. With the game out of reach, there was a chance to simply play out remaining time quietly and prepare for the rematch next week at Concordia. Unfortunately, that’s not usually the case with rivalries.

The following sequence of events was one that left a sour taste in the mouths of many after the game.

Stingers forward Zachary Zorn layed a heavy hit on a McGill player, who then went after Zorn in the corner a few second later. Instead of a simple hit though, Zorn was grabbed and punched several times (though gloves appeared to have stayed on). After Zorn took several punches and linesmen attempted to break things up, a scrum erupted with a newfound intensity.

“I don’t think it’s the classiest way to end a hockey game but it’s hockey and stuff like that happens,” said Stingers forward Chase Harwell.

It was at this point that the five foot five Sanche was pulled out of the scrum and had his mask broken before taking punches to the face.

“It’s kind of disgusting I’d say. You’re in a league with no fighting allowed so you’re kind of defended [from retribution]. Stuff like that doesn’t have any place in the game,” said Neill. “You’ve got to know when to draw the line. When someone’s spitting up blood after, it’s never a good sign.”

The game was stopped for a full four or five minutes. Sanche was unable to get up fully as he was examined by medical staff. He eventually made it off the ice but like Turcotte, he did not look to be in good shape.

Though there is a game between this matchup and next week’s, there’s excitement from players at the chance to avenge the defeat with a win over their cross town rivals.

“The best part about it is we play them next week,” said Harwell.