The Martlets spoiled Concordia’s plans early on when Stéphanie Desjardins scored high glove-side on Alice Philbert 57 seconds into the game. The early tally gave McGill the momentum for the better part of the period. Shana Walker extended McGill’s lead with 1:11 left in the first.

The home side struck 12 seconds later on a quick rush right off the faceoff. Lidia Fillion’s second goal of the season brought the Stingers within a goals distance of their rival. Claudia Rodrigue and Audrey-Anne Rodrigue prepared the play for their teammate. Fillion’s goal gave Concordia something to build on at the start of the second period.

“I think the goal gave us energy,” said Fillion. “We told ourselves that we could get back into this one.”

Coach Chu’s squad applied intense pressure right from the initial faceoff in the second. The hustle on the forecheck was much more evident in the second for the Stingers.

“We told the girls to not let the 2-1 score indicate how we are playing,” said Chu.” I thought we did a great job in the second period.”

Despite some decent movement on the power play, the home team was unable to open quality shooting lanes.

“We wanna get better,” said Chu. “It’s one of those aspects we are always working on. It’s also one of those part of the game where you lose more than you win. So we try to stay positive about it.”

“We tried to pass when we had a shot, and we tried to shoot when we could have made a pass,” —Audrey Belzile

There is no doubt that a game-tying power play goal would have sent the game in a much different direction. But once again, the Stingers’ lack of opportunism prevented them from doing so.

All that exciting pressure from the first half of the second was abruptly snapped when Marika Labrecque completed a quick two-on-one for McGill. Labrecque’s tally was the backbreaker for Concordia.

The home side was awarded another player advantage in the second. Once again their inability to convert prevented them from coming back in the game.

“I want to say we had four or five two-on-ones in the second,” said Chu. “We have to put those ones away.”

The third period was the story of the McGill squad. RSEQ points leader, Jade Downie-Landry, and Valérie Audet added to McGill’s lead in the third. 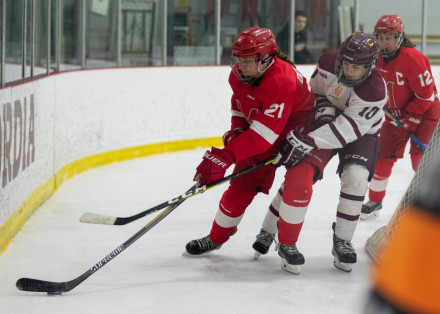 It was Audrey Belzile who best described her team’s performance.

“We tried to pass when we had a shot, and we tried to shoot when we could have made a pass,” said Belzile. “Definitely, a lack of opportunism.”

McGill’s fifth goal prompted Chu to change her goalkeeper, bringing in veteran Katherine Purchase for the first time this season. Injuries had kept her out of the lineup for the first half of the season.

“Kat is a big part of this team,” said Chu. “She contributes in a lot of ways that go beyond the on-ice component.”

Purchase will most likely be the starter for Concordia on Sunday as they face the Carleton Ravens. Leaving little time for adjustments between the two games.

“We have to want to score. We have to bear down,” said Chu. She praised her players’ effort on the, but mentioned the team needing to feel the sense of urgency to score on the odd player rushes.

This game will give the Stingers a chance to create some momentum for the road to the end of the season. They have won the two meetings against Carleton this season. If they can convert on their opportunities, Concordia should be able to add one to the victory column.