Former Stinger Jim Corsi Comes back to Where it All Began

Talking with Jim Corsi, you see the blend of fun and professionalism that everyone brings up when you ask about him.

In his 60s, the Stingers assistant coach brings both a youthful enthusiasm and wisdom that only comes with age and experience.After a career spanning five decades as both a goalie and coach, he possesses plenty of the latter.

Corsi’s head tips back in laughter during a post-game interview as he tells reporters a story from his years as an NHL goaltending coach, something head coach Marc-André Élement and his players appreciate as much as the group of chuckling journalists.

“It was a living nightmare,” laughed Corsi, explaining that while coaching with the St. Louis Blues, he was surrounded by a staff of former players that had eliminated the Buffalo Sabres, his former team, from the Stanley Cup final on a controversial goal during his early days as a coach.

Corsi’s time in the NHL came after his playing career with the maroon and gold.

For three years in the 1970s, Corsi wore a Stingers jersey and distinguished himself as one of the finest athletes in the university’s history. His work as both a Stingers hockey and soccer player earned him all-Canadian honours in both sports and a spot in Concordia’s sports hall of fame. He also holds the honour of having his jersey number retired by the Stingers as well.

And that’s just his university resume.

“It’s really fun to have an alumni [like Corsi] back,” said Élement. Corsi has spent a successful 2017-2018 season working with Élement as a goaltending coach and helping with the team’s penalty kill. 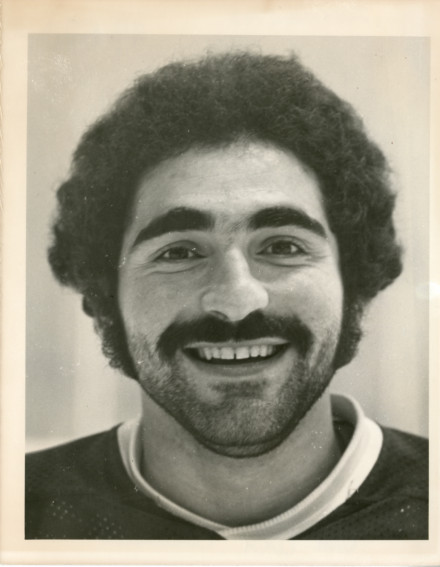 Corsi is the only Concordia athlete to have his jersey number retired by the men’s hockey team.  Courtesy Records Management and Archives, Concordia University

Between his two Concordia careers, Corsi spent time in six different professional leagues, including the NHL. He even represented Italy in the 1982 World Hockey Championships. That Italy team managed to tie team Canada, led by one-time teammate Wayne Gretzky, along with legends like Bob Gainey and Darryl Sittler, before going on to defeat the United States.

Corsi went on to a successful coaching career in the NHL, spending 18 years with the Buffalo Sabres and St. Louis Blues as a goalie coach and mentoring top tier goaltenders.

That kind of experience doesn’t go unnoticed by his players.

“He’s worked with goalies like Dominik Hasek, Jake Allen, Ryan Miller. Big goaltenders who played in the NHL,” said Stingers goaltender Marc-Antoine Turcotte, who spent the season under Corsi’stutelage. “Corsi knows what he’s talking about so you always have to listen.”

Corsi has found a level of success rarely seen for players coming out of university hockey. It’s why Corsi’s return to his alma mater has been all the more celebrated.

“He wanted to give back to the program [and] he’s helping us a lot,” said Element. “He brings professionalism, […] he’s doing an amazing job.”

“He’s worked with goalies like Dominik Hasek, Jake Allen, Ryan Miller. Big goaltenders who played in the NHL. Corsi knows what he’s talking about so you always have to listen.” — Marc-Antoine Turcotte

Corsi is also happy to be home and enjoying the work he loved back where his career began.

“I’ve worked abroad for almost 40 years but every summer I come home,” said the Montreal native, stressing that working in the city where he belongs is something that brings him a good deal of happiness.

That kind of joy is something that Corsi works to bring to the team.

As professional and experienced as Corsi is, he knows how important it is that his players don’t “become toothpaste,” that is stuck in a bottle and squeezed out by tension. He wants to make sure
players aren’t succumbing to the pressure that he knows they’re under.

“We try to keep the kids upbeat and positive, even when it looks dark,” said Corsi with the frankness and simplicity that colours much of what he says. Cliché or not, when Jim Corsi brings out his nuggets of wisdom, it’s tough to feel that they are anything but genuine.

He’s a coach who puts in the effort to dispel any tension or fear that sets in, either on the bench or in the room, and that positivity of his attitude makes for a much more relaxed and capable team.

It’s a real help for Corsi’s pupil, Turcotte. Due to his position, the second year player may be under more pressure than any other Stingers on the ice every night. “We built a big relationship,” said Turcotte, explaining that Corsi’s approach to coaching helped his mental game as much as his on-ice performance.

“We have a good bond,” continued Turcotte. “At practice we talk about anything. Whether it’s politics or economics or just hockey in general. We’re close.”

Turcotte’s performance has been outstanding for the Stingers in their most successful season in over three decades. With a .915 save percentage in 26 regular season games, Turcotte was a consistently capable and frustrating opponent for every team he went up against.

Only two goalies out of all of Canada’s universities faced more shots than Turcotte’s 740 as the young goaltender backstopped his team to their first nationals appearance since 1984.

According to Turcotte, his performance this season can be traced directly to Corsi’s coaching.

“He’s helped me develop to the max and he’s pretty much the reason why I played so well this season,” said the Chateauguay native.

In Corsi’s eyes, Turcotte’s success is a result of him checking off the boxes that he looks for in a goaltender, as he praised the first time U Sports starter’s performance this season.

“The things I look for in goaltenders is curiosity in the position and the effort to get better,” said Corsi. “[Turcotte] never shied away, always tried to improve himself and tried to find a way to make himself a better goalie.”

Turcotte is planning on getting onto the ice with Corsi in the offseason to continue his training with the former NHL coach.

Watching Turcotte and his teammates close off a 3-2 victory against the York Lions in March and earn a spot at the national championships was a special moment for Corsi. Plenty of his teammates from his Stingers years were in attendance to see his young players “living history.”

“Winning is what those kids did [against York]. It’s a lesson that’ll last a lifetime.”

Corsi and Élement have yet to discuss next season and Corsi’s potential return to the bench in September. Élement’s hope is that he and Corsi will be side by side again going into the 2018-2019 season and beyond. The head coach’s hopes are high after hearing from Corsi just how much he’s enjoyed his time working with such a “good group of guys.”

Whatever happens moving forward, it’s certainly been a memorable homecoming for one of Concordia’s best.