Festival Review: Her Side of the Story Gives Women Their Narratives Back

Imago Theatre’s Feminist Theatre Festival Made Some Much Needed Revisions

20 hours may seem like enough time to write that history paper you’ve been procrastinating on, and it’s definitely enough time to binge watch the entirety of Stranger Things on Netflix. If you’re trying to produce a full-length theatrical performance, though, 20 hours of rehearsal might not cut it.

Her Side of the Story: Revision to Resist was a theatre festival organized by Imago Theatre. It reimagined four “well-known stories written by men,” according to one of the festival’s directors, Sophie Gee. These dense, feminist stories were captured raw on the stage of Centaur Theatre from Oct. 31 to Nov. 5.

While the original narratives are typically dominated by the male lead, Her Side of the Story delivered the perspective of the women who made it all possible.

In just 20 hours, four female directors did the improbable. They each produced a play and presented them at the festival to a packed audience, complete with lights and music.

The hasty production was evident by the minimal set and costumes in each play. Each actor carried a script onstage, and props were often mimed. These factors either distracted from the show or enriched it by creating a collaborative experience for the audience.

After each show was a talk-back period with the cast, director, and a guest speaker. None of the plays had happy endings, but they each fueled conversation about social injustice.

“It starts with feeling something,” said Micheline Chevrier, the artistic director. “Your solution should be personal.”

The Penelopiad was a stunning play written by Margaret Atwood and directed by Jen Quinn. It served as a contrast to the tale of Odysseus, conqueror of Troy.

The play followed the story of a determined woman, Penelope, portrayed by Deena Aziz. She articulately expressed her desire and loneliness as she awaited news regarding her husband at war.

A small team of women made up the rest of the cast, many of whom played several characters, including the male roles. Though the cast described a positive dynamic of working in a team of all women, the chemistry onstage was noticeably lacking. 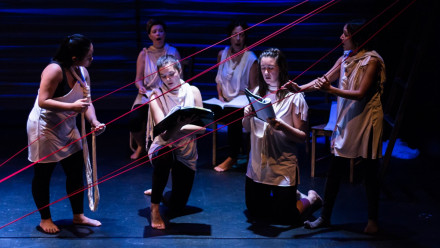 A group of actors onstage for The Penelopiad, a revision of The Odyssey. Courtesy Pavlo Tull

For such a robust play, The Penelopiad could only be described as overwhelmingly unrehearsed. On opening night, the entire cast was on book. The open scripts on stage completely obstructed emotion. The blocking was unchoreographed and the actors often seemed lost.

While there was some undeniable talent among the cast, it was clear that they were not given enough time to discover the potential of this profound play.

Quinn explained that the rehearsal period was chaotic to say the least. She described coming into rehearsal “with guns out,” which she readily admitted was not an effective approach.

What Happened After Nora Left Her Husband

At the end of Henrik Ibsen’s A Doll’s House, Nora Helmer leaves her husband on Christmas Eve. What happened next was explored in What Happened After Nora Left Her Husband, written by Elfriede Jelinek and directed by Cristina Cugliandro.

The character of Nora, played by Jen Viens, explored independance as she discovered what it meant to belong only to herself.

The theme of love was prominent throughout the show, representing it as both a daydream and a business exchange. Nora was frequently treated as a possession, to put emphasis on the power dynamic between the male and female genders. 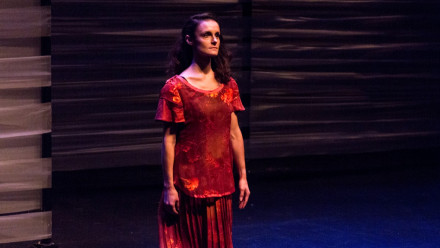 Jen Viens as Nora in After Nora Left Her Husband, a revised version of Henrik Ibsen’s A Doll’s House. Courtesy Pavlo Tull

The arrangement of this play was captivating and charming. The cast exchanged animated dialogue and easily played off each other’s energies. The relationships between the characters were barely hindered by the open scripts and limited rehearsal time.

The emotion that ran throughout the show was deeply moving. Viens was simply magnetic, bringing an enthusiasm to her role which created a spark that electrified the performance. The movement of the show was fluid and the characters interacted with ease. An unhappy ending left the audience shocked and dismayed, but it was a very powerful sensation.

Katherine Parr, the last wife of Henry VIII, was a strong-willed woman who asserted herself against her demonic husband. Henry was widowed five times before his marriage to Katherine, having annulled or executed four of his previous wives.

In The Last Wife, written by Kate Hennig and directed by Tamara Brown, Katherine—known as Kate in the play—approached the marriage like a business deal. She demanded the right to deny her husband sex, and she encouraged him to bring his estranged daughter home. She became a teacher to Henry VIII’s two children and she developed a sense of community amidst a twisted family, and was the only wife to outlive her husband.

The most notable aspect of this production was how clearly the characters were portrayed. The cast explained that a large part of their rehearsal process had been “character conversation,” wherein the actors discussed the growth and expression of the characters.This allowed them to become comfortable with their roles.

Even though the actors felt at ease with their characters, there seemed to be a lack of chemistry in their interactions. Feelings of love fell flat, and scenes of intimacy came off as strained and unchoreographed.

The feeling of hatred, however, was fiery and intense. Hostile exchanges between Kate, played by Amanda Kellock—former artist-in-residence at Concordia in 2003—and Henry, played by Quincy Armorer, showed real depth and passion.

Armorer said that it was both exciting and terrifying to play a maniacal misogynist in a festival that is deeply rooted in feminism. He added that it was a great experience to develop such a horrible character.

Fucking A, written by Suzan-Lori Parks and directed by Sophie Gee, was an emotional landslide derived from Nathaniel Hawthorne’s The Scarlet Letter. Parks rewrote the script to detail Hester Prynne’s battle to free her son from prison.

“Although Parks doesn’t give an indication about race, I feel that Hester is very much a woman of colour,” said Gee. “There’s definitely a hierarchy.”

In the original story, Hester was required to wear a red “A” on all of her garments to let everyone know that she had committed adultery. The Hester in the revised play, portrayed by Tamara Brown, had the mark brutally branded into her neck—for abortionist.

The whole town treated female sexuality like a serious sin, something to be deeply ashamed of. The women used a made-up language to discuss vaginas, periods, and the female orgasm. It was a language that the men did not understand, and therefore could not take away from them.

Brown elevated the sophistication of the show simply with her stage presence. To hear her cry onstage was to experience true heartbreak. Emotion dripped off of every word that she said.

She was supported by a skilled cast, many of whom played several roles. The distinction between each character was well-developed. Cat Lemieux and Matthew Kabwe stood out as especially dynamic in their multiple roles, both of them able to transform characters in a breath.

There were many horrific scenes, directing the audience’s attention to the injustice that women and particularly women of colour face in society. The show was an absolute tragedy in all the best ways.

Imago Theatre’s Her Side of the Story: Revision to Resist was an inspirational event; it gave women leadership roles in producing the shows. In each production, women were at the forefront, and their stories were finally heard