Last season, the Stingers were an offensive powerhouse of a hockey team. To start this season, they had just five goals in three games. That number doubled after a duel with York University.

“We’ve had our struggles, especially on the powerplay. We haven’t scored many goals,” said rookie defender Bradley Lalonde. “It feels good to produce and help the team.”

An offence that showed potential, but not much else, at the start of the season finally woke up. The Stingers put up a five goal performance, including three in the last period to send the game to overtime.

Both Lalonde and forward Charles-Éric Légaré, two key part of the offense, scored their first goals of the year in the tight game.

Their markers—and the three others—were crucial in a game that seemed out of the Stingers’ hands until the very end.

The maroon and gold didn’t lead once throughout the game until Philippe Sanche’s game winner in overtime.

In their first match since the Stingers defeated York en route to nationals, the Stingers played catch up from the scoring of the first goal. Despite outshooting their opponents heavily (by double at several points in the game), they fell behind late in the first and would have to tie the game four separate times to earn a chance to win it in overtime.

“It’s certainly hard in that you’re always chasing,” said captain Phil Hudon. “We just had to stay on task. We were playing a really good game so we had to just keep going and not get bogged down by one goal differences.”

The teams traded chances but it looked as if Concordia’s lack of offence may continue for another game when Lalonde’s marker was the only one after two periods of play, as the visitors led 2-1.

When they failed to create offence last weekend, the Stingers deviated from their game plan, tried to do too much and ended up on the losing end of a match.
That’s certainly not how things went this time.

“It’s frustrating. But you’ve got to hang in there and keep shooting. Eventually it’s going to go in and when you get one, you usually get two or three,” said rookie Hugo Roy.

The Stingers did just that, scoring three goals in the third, including two goals from Roy himself.

When York scored after one of Concordia’s nine penalties to make it 4-3 with just five minutes left, it seemed as if the offensive burst just wouldn’t be enough.

Then another penalty came and down a man with less than two minutes to play, the Stingers looked like the team that made it to the national championships a few months ago.

Légaré found the back of the net shorthanded, forcing overtime and eventually the win. To find a more concentrated version of this explosion of offence from a Stingers team that started with some difficulty in that department, look no further than Lalonde. 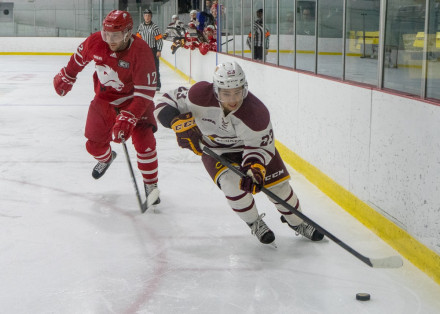 Rookie players like Hugo Roy and Bradley Lalonde are starting to get comfortable with their new team. Photo Elisa Barbier

The rookie played his best game of the season, scoring a goal and an assist in addition to being on the ice for the game winner.

Lalonde has begun to look more at ease in his new league and is finding the offensive touch that made him such a threat in major junior hockey.

“I’m getting more and more comfortable. Hopefully by next game I’ll keep getting better, better and better,” said Lalonde with a smile post game.

He’s one of a group of rookies that can be major difference makers for the team. Players like Lalonde (goal and assist vs. York), Roy (two goals and two assists vs. York), and defender Charlie Roy have started to take on impact roles despite their lack of experience.

If the large rookie class can get comfortable quickly and continue to improve on this production, the Stingers look to have an offence to be reckoned with. For now though, they’re enjoying the production and the feeling it’s giving them moving forward.

“Finally after four games we’ve got good momentum for our [next] game,” said Roy.