The home squad was playing their second game of the weekend after defeating the McGill Martlets in a shoutout on Saturday afternoon.

As fatigue would be a strong test for the home side, a notable absent on the Stingers roster for the initial face-off was team captain Claudia Dubois— who eventually joined the team for the third period.

“We didn’t have a good first period,” said head coach Julie Chu. “We had a good first five minutes and then I think we got a little bit sloppy. The second and third were much better.”

The heavy legs showed early on for Concordia as they found themselves down early in the first following back-to-back goals from the Gee-Gees to open the score.

Veteran forward Marie-Pascale Bernier helped improve team morale before the end of the period, with her first of the season cutting Ottawa’s lead in half.

The second was much of the same for the Stingers. They struggled to find their footing and were not able to get much going for themselves.

Their best opportunity of the period was created by rookie forward Leonie Philbert setting up assistant-captain Audrey Belzile who could not convert as she toe’d the puck wide of the net off a good scoring chance. Belzile was not to be denied twice as she beat Ottawa’s rookie netminder Aurélie Dubuc early in the third to tie things up at two.

Philbert gave Concordia its first lead of the game collecting an errant puck in Dubuc’s crease. The rookie remained humble saying she was happy to score her first goal in this league, but that it was a team effort.

This wild third period was far from over as Ottawa would retake the lead with the help of a pair of goals from Ariane Aubin. 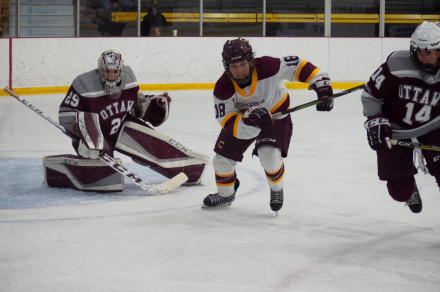 It was a devastating blow for Stingers fans in attendance, who’d watched their team climb back to take the lead. Coach Chu pointed out her team’s issue when playing with a lead.

“We’ve got to work on our tracking,” said Chu. “Ultimately, we’ve got to find a way to backtrack and not give up so many opportunities.”

Much to the delight of the head coach and the fans, Rosalie Bégin-Cyr brought everyone back to square one, scoring with 2:10 left to play in the game.

The play of the game happened with 40 seconds left on the clock.

Second year forward Audrey-Ann Rodrigue displayed an outstanding individual effort to score and give her team the win.

Leading the charge in Ottawa’s zone, she held onto the puck deking out two Ottawa defenders and capping off the sequence by beating Dubuc blocker side.

“I was really stressed,” said a grinning Rodrigue. “It was all about intuition. I went to the net and I thought to myself that I had nothing to lose so close to the end of the game. I don’t get to score these type of goals often, so I’ll definitely remember this one for a long time.”

Rodrigue was not the only one grinning after the game. Her parents, who happened to be in town for the game, were just as happy as their daughter and will likely remember the goal for a long time as well.

Chu had nothing but good things to say about Rodrigue after the game, praising the outstanding effort as well as her growth since last season.

“Last year [she] only played five-on-five,” said Chu. “She worked hard last year in practice to learn the PK and now she’s getting more opportunities on it.”

Rodrigue and the Stingers are now sitting at the top of the Reseau du Sport Étudiant du Quebec standings with their 2-0 record. They’ll be back in action on Friday, Oct. 25 as they travel to Carleton University to take on the Ravens.