Concordia 3, McGill 1: Stingers Come Into Their Own Against Martlets

Stingers Pick Up a Win in Home Opener

Despite a strong 3-1 victory against the Stingers’ rival, the McGill Martlets, at their home opener on Oct. 21, head coach Julie Chu is not eager to make predictions about the upcoming season.

“There’s great things in the future, but we have to focus on the moment to make sure we’re executing now versus wondering what’s going to say for the rest of the season,” said Chu.

The second period on home ice opened with a quick goal by the Martlets on a powerplay within the first two minutes. The point against was just the catalyst the Stingers needed, as the women began to step up their game. 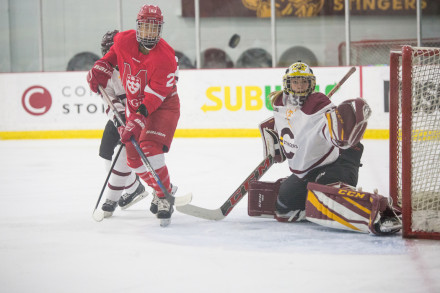 It took eight minutes to get this shot in the third period, as Concordia dominated the puck from the second the puck dropped until the buzzer ran. Photo Daren Zomerman

The maroon and gold began skating circles around their rivals, stealing the puck countless times and showing off some sick moves.

Concordia defender Brigitte Laganière was the first to answer the Martlets goal, followed up by two more from forward Stéphanie Lalancette before the second period was over.

“Our focus was really on playing each shift, focusing on one shift at a time, and a lot of us say that, but being able to do that is a tough thing,” Chu said. “We really honestly thought today that they did a good job of focusing on every shift and not getting ahead of themselves or holding on to something that happened in the past.”

Come third period, McGill began to look winded while Concordia continued to hold the team in the offensive end. Save for a couple breakaways, the opposing team played most of the third period desperately trying to keep the puck away from the net.

Stingers goaltender Katherine Purchase held her ground in the net as well, putting in a great effort to gain back possession when the team’s defences fell. 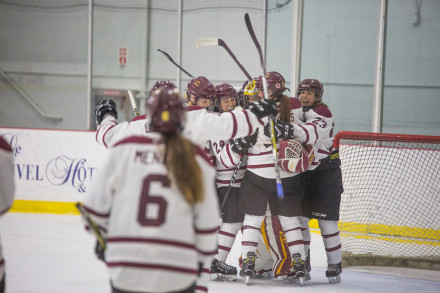 The Stingers are happy to come away with a win. Photo Daren Zomerman

“She’s one of our captains for our team, she just can’t officially wear a C. But you can tell when a goalie is named a captain, that they have a great leadership and voice and presence, and she’s been playing some awesome hockey,” she continued.

The women will play their next game in Ottawa against the Carleton Ravens on Oct. 27, and will be back on home ice Oct. 29 to face off against the Universite de Montreal Carabins.