It took a while, but Concordia’s women hockey team was eventually able to break its two-game losing streak.

That losing streak began a week ago against those same Université de Montréal Carabins.

“Montréal’s a really good team and we always have great games with them,” said head coach Julie Chu. “Every game is an experience and [Saturday] was an experience in losing.”

Fans in attendance at Ed Meagher Arena were treated to a classic goalie duel as Concordia’s Madison Oakes and Montréal’s Maude Trevisan combined for 80 saves. It was only the second start of the season for Oakes who is currently in her second season with the team.

“We had confidence in Maddy going into goal,” said Chu. “She had to make a huge save in the third while [Montreal] were on the power play. Same goes for their goaltender who had to make some really nice saves.”

After suffering a heartbreaking shootout loss in an upset against Carleton earlier this season, Oakes came back with an almost perfect performance against the Montréal shooters.

Carabins’ captain Catherine Dubois was the only one able to beat the Stingers goaltender, lodging a perfect shot just above Oakes shoulder. But the netminder’s composure in the shootout helped her deny Dubois and the rest of the Montréal shooters to secure the win. 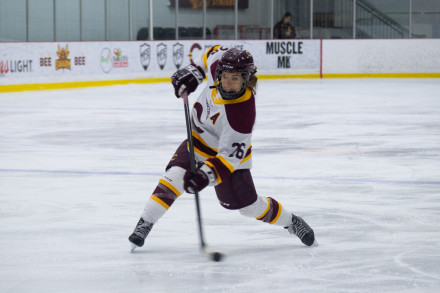 “I had a pretty good warm up and I was feeling pretty good,” said Oakes. “I was a lot more calm than the game against Carleton.”

Remaining calm in front of her net was her plan heading into the shootouts. She focused on her technique making sure to come far out of the net in order to cut down on any chances for the Carabins shooters.

As Oakes kept Montreal in check, Emmy Fecteau delivered the final blow in the shootout. The rookie’s nifty backhander was the key to beating Trevisan between the legs.

“It’s definitely not what I usually do in shootouts.” said Fecteau. “I usually go to the right, but this time I went left and I had no idea of what I was doing. I had asked Alice [Philbert] what to do and she said to go five-hole, so I did.”

It was the second time this season that Fecteau acted as the deciding factor in a Concordia win against the Carabins. In the first meeting between the two teams back November, Fecteau scored her first career U Sports goal in double overtime.

The rookie will have a chance to work her magic against the Carabins once again on Friday, Jan. 24 as the Stingers will visit the CEPSUM at 7 p.m.