When Philippe Couillard took to the podium last Saturday morning to address his caucus, the Quebec Liberal Party leader said he was expecting the Parti Québécois government to call an election for this fall—and he was ready to pounce on the PQ’s flagship legislation currently galvanizing public opinion in Quebec.

Couillard has been a vocal critic of the Charter of Quebec Values since it was first proposed but, calling the PQ’s plan to ban religious symbols in public places a “toxic” initiative, the PLQ leader told about 400 party members just how far he was prepared to go to challenge it.

“Our individual freedoms are non-negotiable,” he said. “If the PQ government thinks it can take our rights and freedoms away, let me just say: over my dead body.”

But by Saturday afternoon, Premier Pauline Marois had already announced that her government would not be sending Quebecers to the polls this year.

In the following days, media analysts questioned publically if the announcement also spelt out the unlikelihood of the charter being adopted, but that didn’t stop thousands of people from converging on downtown Montreal both Saturday and Sunday to raise their voices—both for and against the charter.

However, while thousands were estimated to have taken part in the pro-charter rally, the anti-charter initiative capped out at less than one thousand participants.

Last month was the exact opposite. A Sept. 15 protest against the charter had a turnout numbering in the tens of thousands, but a pro-charter rally one week later had only about 500 demonstrators taking part.

Since these inaugural demonstrations for both sides of the charter debate, anti-charter protests have consistently shrunk in size, while pro-charter rallies have continued to gain more participants with each passing demonstration.

However, anti-charter demonstrations have consistently been double, if not triple the size of pro-charter rallies, up until the marches that took place this past weekend.

Actor Joëlle Morin was one of 20 women co-signers of an open letter appearing in La Presse and Le Journal de Montréal on Oct. 14 articulating support for a charter restricting public workers from wearing religious head coverings and visible symbols.

Spearheaded by Quebec TV personality Janette Bertrand, who was the inspiration for centering Saturday’s demonstration on the protecting of the rights of “Janettes”—used as a synonym for women of the world—the group claims secularizing the state is the only way to ensure equality among the sexes.

“I think it’s definitely time we show that respect between men and woman and between different communities starts with neutrality, no bias,” said Morin.

Demonstrators from international feminist group Femen echoed the sentiment with a display of solidarity. 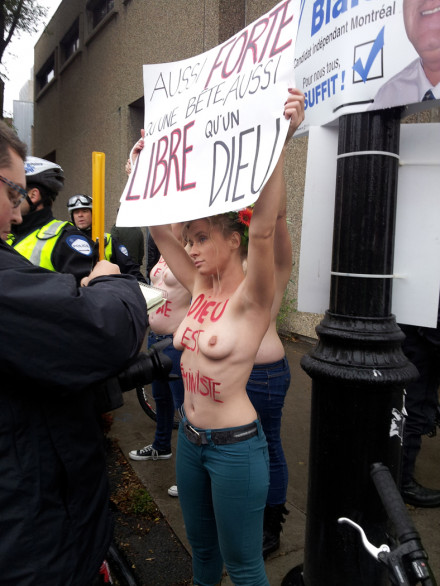 Femen spokesperson Xenia Chernyshova’s read “God is Feminist” in thick red paint. While being detained by police, She told The Link she believes some religions oppress women and therefore need sanction.

“We’re here for laïcité, so in English it’s secularism. We’re here to yell to the whole world […] that we should be all neutral in our appearance and in our minds, especially in public places,” she said.

“The PQ pretends [the charter] is for equality, so let’s talk about equality. These women from visible minorities are heavily discriminated against already,” he said.

“[The charter] will create dependency to [the womens’] husbands or to their father, which is against women’s rights. The fact that they are working for the government is the proof they are free,” he said, adding that making decisions for women goes against freedom of religion, which Foura believes is “the foundation of North American society.”

According to Monsef Derraji—president of the Congrès Maghrebin au Québec, which helped to organize the Sunday protest against the charter—the charter’s focus on state neutrality is not neutral to the cultures and beliefs of Muslim women.

“Neutrality doesn’t mean that if I put on a hijab I’m not neutral,” he explained. “The most important thing is to have a good service; who cares about [a] hijab?”

Michel Virard, president of the Quebec Humanist Association, an atheist group that is a part of the coalition of pro-charter groups that organized Saturday’s pro-secular demonstration, told The Link he sees the charter as something to protect society—and particularly children in the public school system—from being brainwashed by religion.

“I have a grandchild, and I don’t want him to be influenced by religions that are not mine,” he said.

“I don’t want him to be exposed day after day to symbols that are totally foreign to me, and sometimes very opposite to my democratic thinking.”

Sailaha Abdenbi of the Quebec Association of North Africans for Laïcité says her organization would support the charter because it will keep fundamental Islam and Sharia, the moral code of Islam, from Quebec’s public sector.

“Laïcité is the best way to live together in peace,” she said.

But Khadir disagrees, saying he supports secularism but “not over the head of religious minorities, especially women.”

“We think we have to take into account the danger felt by many Quebecers about their language, their values [being taken away],” he said.

“That’s okay, but we can do that by including everybody, not excluding [everybody]. In the Quebec that I know we don’t need to pile over others to ensure our own security.”